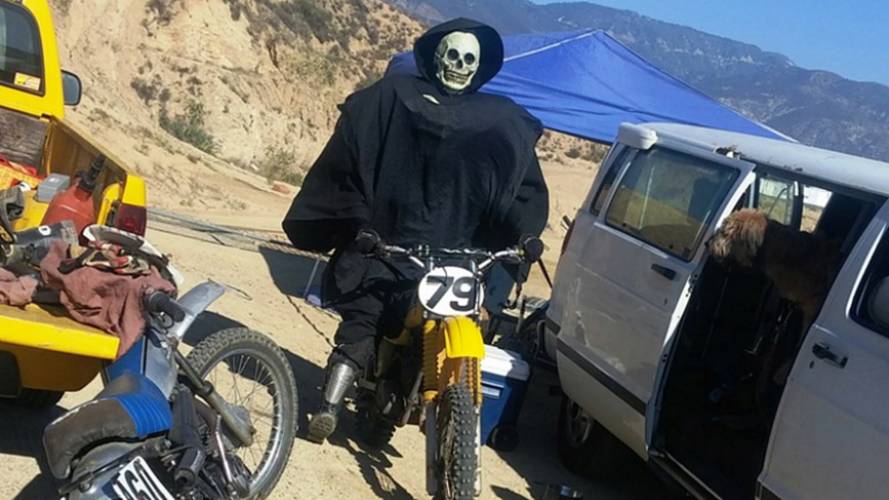 Hell on Wheels Hillclimb was fun, with plenty of costumes, bikes, thrills, spills and excitement. Plus a few beers to take the edge off afterwards.

As the late Yogi Berra is reported to have said, "Some days you win, some days you lose, and some days it rains." Well, this year at the Hell on Wheels hillclimb I was having one of those days. The event itself was fun, as Meatball's events always are, with plenty of costumes, bikes, thrills, spills and excitement. Plus a few beers thrown in to take the edge off afterwards.

A Goal in Mind, At Least

I didn't go to cover the event for RideApart, I went there to race. This was to be the triumphant return of my Mushman era Husqvarna 400 to competition after my horrible showing last year and at the 2010 Catalina Grand Prix. The bike was clean, had a leg-breaking amount of compression after swapping in a new piston and ring, and seemed to be carburating better than ever.

Just in case, I brought my old reliable, dull as dishwater 1975 Honda MT125 Elsinore as well. But the plan was to be a hero on the Husky and make it up that hill like it was a speed bump.

So here is how my day went: I showed up, got the bike unloaded and started, and took it for a spin around the pits to warm it up and break in the new piston. It stalled immediately, fouled the plug, and it went down hill from the truck. This was the first of a half dozen times I pushed it up that hill. I changed the plug and did exactly the same thing.

Charlie found a brand new spark plug in his van, and I swapped that in, started it and made sure to get it good and warm with the petcock off. Wisely, I rode the bike uphill this time and things were great! I took it back down the fire road, topping out at about 75mph with more power than I remembered the bike ever having. After 30 minutes of this, I was feeling like Steve McQueen again—I was ready to conquer the world!

When the time came for my race, I was geared up, costumed and ready to go. The bike was pointed down the hill, so I kicked it and head that way. A few minutes later, a sweaty monk was laboring to push the bike back to the pit—the plug fouled again.

READ MORE: 5 Reasons Why Flat Tracking a Mini Bike is the Most Fun You’ll Ever Have on a Motorcycle | RideApart

Luckily, my old reliable Honda MT125 was right there and started up with no problem, even after sitting since the August flat track race. Maybe I can't be McQueen, but I can at least be sweathog era John Travolta. This bike is down on power compared to just about everything, but I kept it around as a trainer for friends and a backup for me.

I rode it around a little and made sure it was warmed up, then headed to the starting line 100 years away. Unfortunately, while just cruising in 2nd gear through the pits, the bike seized without warning. Seriously, I should have just stayed at home, drank beers and lit some money on fire. All I got out of the weekend was about 15 minutes of fun, riding the Husqvarna up and down the fire road, and legs that felt like I did eight hours of Stair-Master from the Kickstarter. I would have been better off playing golf.

The Rest Of the Field

But enough about my day, why don't you look at some pictures of people and bikes who had a better time than me this Sunday. Afterwards, I'll fill you in on what happened:

I shot this mostly because I wanted a picture of the cool tread of the Avon Track Racer tire (which looked to be at least 40 years old). The bike in the background, however, makes it a pretty good shot.

The once unloved Honda CB160 sure gets plenty of use these days as an entry level racer, in all kinds of events. This one had a great vintage look to it, but was actually just modified from stock recently.

You want to get some authentic dirt and scratches on your Harley or Triumph? Bring them out to a Hell on Wheels event. Getting them dirty is much more fun than having them sit in your garage cleaning them on the weekend.

This year Born Loser sponsored a chopper/street bike class, which unlike the rest of the classes, just did a traditional hillclimb straight up the hill. All manner of choppers, bobbers, and not quite street legal British and American iron showed up to make noise and kick some dirt.

This Harley with an extended wheelbase looked purpose built for a serious hill, except for the wide open velocity stack. A high school shop class built this as a semester long project, which is about 100 times cooler than anything that came out of my shop class.

This gentleman, with his tricked out CB750 cafe racer seemed to have gotten lost and confused. But thanks to the nature of the Born Loser class, he was able to just gas it and go and made it to the top of the hill.

The rest of the bike classes ran two at a time on a shortened motocross course, with a sharp right turn before the run up to the hill. As long as you were in the right gear and got a good drive off the corner, you typically made it up.

In this video the grim reaper (played by my friend Charlie) raced another cafe racer, a KZ1000. You can see how easily the street tire shod KZ makes it up on momentum alone from the massive acceleration it can unleash on the flatter section.