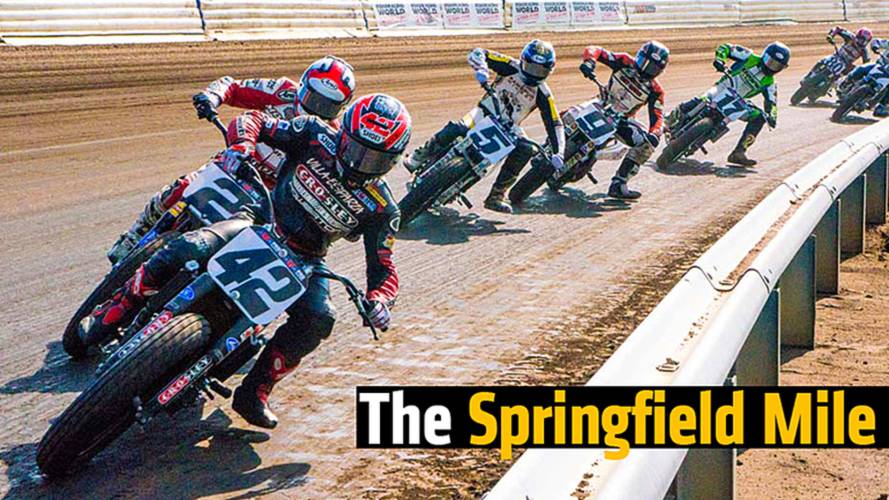 We cover the last AMA, Mid West race of the 2014 season, the Springfield Mile.

Its history makes it a particularly coveted win amongst the riders. The track is made of packed smooth dirt, which makes it an incredibly fast surface for the riders who blaze down the straights at 120-130mph speeds. The track’s particular oval shape is not as challenging for turns, making it not as physically demand on the riders.

Therefore the track is a test of both physical courage and psychological wit.

Like watching Valentino Rossi stalk his prey on the MotoGP circuit, to win the Springfield Mile requires the rider find the perfect time to pounce on one’s competition.

The race draws crowds from all over. Just at our hotel, we met a group of riders who from Georgia who were there with a group from Tennessee. Springfield has a variety of hotels, restaurants and bars making it a nice place to be adventure to during the race weekend.

Additionally, the Illinois Motorcycle Dealer’s Association, who has been promoting the races since 1982, hosts a series of short track races over the weekend in case race fans can’t get enough. On Saturday night many of the Pro Flat Track guys and gals, enter or watch the evening short track races, giving fans more opportunity to interact with racers.

To understand the excitement of the day’s race requires knowledge some of the recent history of the series. Bryan Smith, the #42 Villa-Esparza Crosley Kawasaki EX650 rider and current points leader in the Grand National Championship, won the first round of the Springfield Mile over Memorial Day weekend while also setting the fastest one-lap record in the history of the course (and we have an exclusive interview with him forthcoming).

The race day is composed of practice and qualifying earlier in the morning, and then a series of heats begin after the opening ceremonies in the afternoon. Only the top riders in each heat advanced to the main event.

Instead of running the Pro Singles for the event, Pro Twins ran instead. Among the Pro Twins rider, it was particularly notable that Molly Terry (read her interview here), the #11 B&B Racing Harley-Davidson (above) rider, came in first in her heat. The crowd absolutely roared in excitement. Terry told me, “As I came out of that last corner I thought I could exit it with just a little more speed, then I tucked in as much as I could.”

In the Pro Twins 12-lap main event, I stood in corner one trying to capture as much of the race as I could. Jarod Vanderkooi, the #17 Johnny’s Vintage Motorcycle Kawasaki rider who also won the first round of the Springfield Mile, took a clear lead from the get-go. His great lead indeed landed him first with a 2.3 second victory over the other riders.

A battle for second emerged between Molly Terry and Brandon Wilhelm, the #24 Sylvester Farms Harley-Davidson rider. Terry sat third in most the battle until Wilhelm’s bike gave up allowing Terry to claim the second place spot on the podium. Dalton Winkler, the #35 Van Leeuwen Distributing Kawasaki rider, took third.

For the Grand National Championship 25-lap main event, the race was a great show for fans that day. Throughout the entirety of the race, a group several riders wide battled for the podium. In the final laps, only four remained: Bryan Smith, Kenny Coolbeth, Jared Mees, and Jake Shoemaker. Smith had held his lead throughout the entire race, though Coolbeth began stalking behind him, watching his every move.

The psychological aspect of this race became clear as the final lap approached.

Smith continued to hold a clear lead over the others, but as the pack ducked into the last turns, Coolbeth grabbed a handful of throttle. He successfully dived for the first place position as the pack exited the turn.

Coolbeth suddenly had first place as he and Smith flew down the straight. Smith tucked more and more and pinned his throttle towards the finish, but Coolbeth’s tire barely crossed the finish first with a 0.01 lead. It was an unbelievable show for the fans in the grand stands, and a roar came from the grandstand.

A photo finish was the only way I was sure as to who took first. As the riders came onto the podium, Coolbeth was beaming from ear to ear saying, “I’m having fun racing my motorcycle.” While Coolbeth took first, Smith continues to lead in points for the series.

If you haven’t made it out to a flat track race, there are only two left on the west coast this year. If not, be sure to earmark a weekend next year to adventure out and catch one of these spectacular shows! In the meantime, you can watch the excitement of the last race below. We can’t wait to see how the rest of the season turns out!

Thanks to Bree Radloff for his photo contributions to this article.