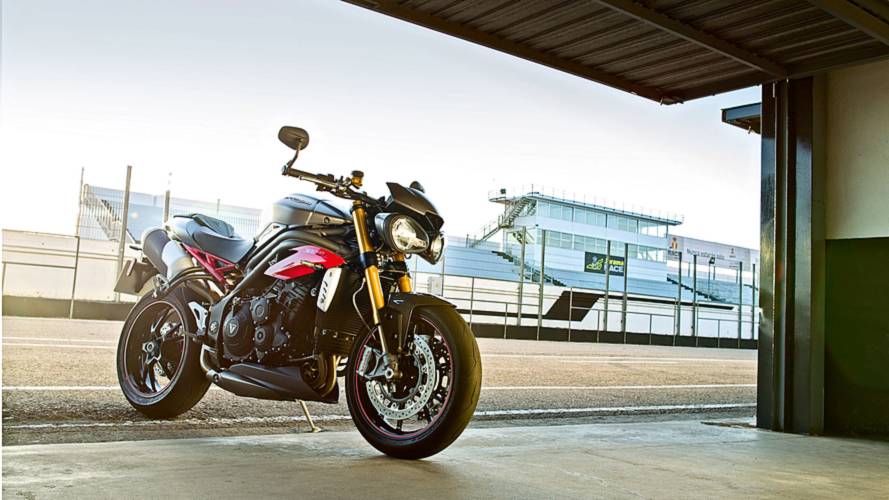 Triumph is on a revamp roll and it seems like the the Speed Triple is up next under the new monikers “S” and “R."

Triumph is on a roll and pushing into the market with a ferocity not seen in years. Following the popular Bonneville line's recently announced revamp, it seems like the the Speed Triple is up next under the new monikers “S” and “R."

Centered around a new 1050cc triple engine, the new Speed Triple S and R feature 104 new developments that combine to deliver more power and, more importantly, more torque across the whole rev range, while still delivering an increase of up to 10% fuel efficiency. For anyone that has had the pleasure of twisting a wrist in the saddle of the Speed Triple, you’ll know how much damn fun can be had on this bike.

Engineering developments include a new combustion chamber, new cylinder head, new machined crank, new piston design and new ‘Ride-by-Wire’ throttle bodies. A slip assist clutch, smaller, more efficient radiator and a new free-flowing exhaust that has a 70% increase in flow rate have also been added. It is estimated that the new Speed Triples will put out 140 hp.  We’ll see how close those estimates are when a production model is put on the dyno.

The new Speed Triple S and Speed Triple R will also boast a suite of rider-focused technology. Among the features that add to the Speed Triple’s performance and capability are a new ECU coupled to a new adjustable Ride-by-Wire throttle with selectable throttle maps that will enable five distinct riding modes to choose from: Road, Rain, Sport, Track and a new Rider Configurable mode. The upshot of these modes is the rider's increased ability to set the motorcycle up for optimum performance relative to road conditions or environment.

From a styling perspective the Speed Triple S and R take queues from their baby brother the Street Triple RS. The latter was released late last year with the addition of a Daytona 675R-inspired tailpiece and seat, more aggressive (less bulbous) narrow design, and a low, lithe stance accentuated by new bodywork.

Some other nice aesthetic improvements include lovely cafe racer bar end mirrors and ultra minimal front turn signals. The headlight has begun it’s evolution as well, hopefully back to being fully round. (Bring back the round headlamps!!!) Maybe someone at Triumph will hear me along with the echoes of the masses or offer an upgrade option.

The R-Spec version gets all the all of the above, plus some additional upgrades over the S, including a carbon-fibre front mudguard, carbon tank inserts and a bellypan. The R comes with adjustable Ohlins suspension which feature NIX30 front forks and a TTX36 rear shock. Other nice touches are billet-machined bar clamps and risers, swingarm pivot covers and rear wheel finisher, plus a red radiator cowls and a red subframe…as expected from Triumph’s R-spec bikes.

The Speed Triple S will come in ‘Diablo Red’ and ‘Phantom Black’, while the Speed Triple R will be available in ‘Crystal White’ and ‘Matt Graphite’. Sign me up for that Matte Graphite.

What To Hope For

The Speed Triple has always been a fun and powerful liter bike, but never as nimble in the corners as or as fun to ride as the Street Triple. That’s my own opinion. Hopefully with this re-design we’ll see a more svelte, more powerful Speed Triple, but we won’t know until we get a chance to play with one.

What are YOU hoping to get out of these bikes? Let RideApart know in the comment section below.