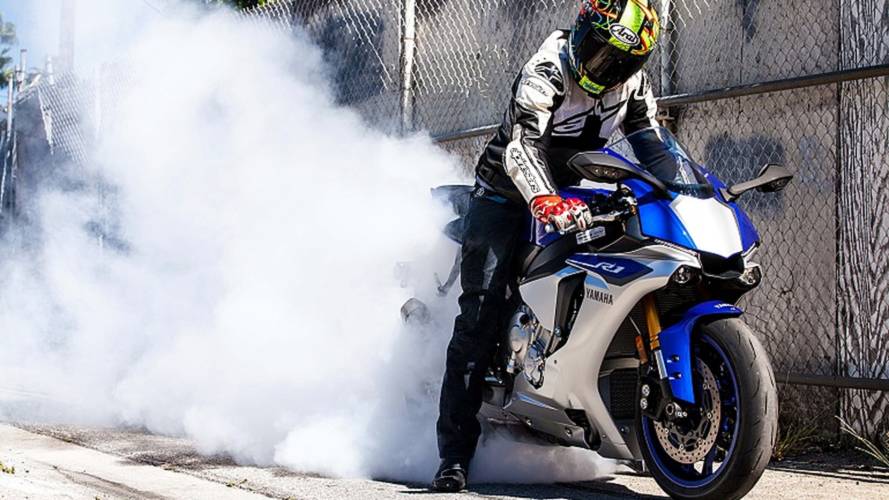 Perhaps too much bike for the street, Yamaha has produced a cutting-edge track weapon that has set a new standard with the all-new 2015 YZF-R1.

Perhaps too much bike for the street, Yamaha has produced a technologically cutting-edge track weapon that has set a new standard for superbikes on the market with the all-new 2015 YZF-R1.

Throwing a leg over the 2015 Yamaha YZF-R1 doesn't feel like jumping on a 1000cc sportbike at all. In fact, if it weren’t for the unique aero design of the tail fairing, one might mistake this for an R6 on a dark street at first mount. The narrow seat and tank, slim chassis and compact front fairing (especially uncharacteristic of an R1) feel strikingly similar to those aspects of a supersport. However, when the ignition is cycled to the “ON” position and the instrument panel comes to life, it's apparent that this is no run-of-the-mill sportbike. This is a full-on superbike in every sense of the word.

The crossplane inline-four fires up with the grunt of a race-prepped V-twin. But, from the pilot’s seat, the bike feels like a well-balanced 50cc scooter with minimal vibration transmitted from the bike to the rider. Letting the clutch out and rolling down the street, the tall first gear and smooth engine reduce the need for much shifting around town. However, opening up the throttle and banging through the gears while entering a freeway on-ramp is a much more intense experience.

The YZF-R1 is an entirely different animal when unleashed into the higher RPM’s. The front wheel reaches skyward at the top of first, second, and third gear at wide open throttle even when hanging over the front end and with wheelie control engaged.

Vibration and power delivery are still very smooth under these conditions, so triple-digit speeds are approached far before anticipated. Unfortunately, modulating a constant speed down the highway is brutal. The twitchy throttle acts like a binary on/off switch, so extended freeway jaunts become rather taxing. The firm seat and aggressive riding position don't help the cause here.

When the bike hits a race track, however, the stars begin to align. The derivation of every detail, feature, and characteristic of the bike become apparent on the first lap around the track. The nimble handling, gnarly power curve, and vast assortment of electronic rider aids were obviously designed with one environment in mind: the race track.

While perhaps not the most comfortable nor forgiving bike on the street, the 2015 Yamaha YZF-R1 might be one of the most capable and advanced race bikes right out of the box ever widely offered to the general public. The only modest aspect of this bike is the price tag.

For the 2015 YZF-R1, Yamaha carried over the “crossplane” inline-four cylinder engine layout that the manufacturer introduced in 2009. However, the specifications of the motor are completely new. Improvements include titanium con-rods, lightened clutch, rocker-actuated intake and exhaust valves (both of which have an increased diameter), slightly larger aluminum pistons, and a reduction in the over-all crank dimension by over one inch. All of this results in a motor that is nearly nine pounds lighter than the previous iteration, which pumps out almost 200 horsepower to the crank.

This massive power peak is accompanied by a linear torque curve produced by the crossplane crank and “big-bang” firing order. The power strokes are spaced from one another in non-sequential order over the course of the complete ignition cycle. More specifically, ignition occurs as the crank rotates 180°, 90°, 180° then 270° repeating in a “fire, 0, fire, fire, 0, fire, 0, 0” pattern. The uneven firing order also acts as a mechanical traction control system as brief lapses in peak power delivery allow the rear wheel to regain traction in the event of a slip under throttle. However, as explained later, the electronic TC system has that event covered in excellent fashion.

Receiving, sorting, and delivering this power to the rear wheel is handled by the silky smooth six-speed gearbox. Similar to the RSV4, the R1 transmission has a relatively tall first gear, which allows for easier cruising around surface streets as well as a usable bottom gear for tight corners at the track. Cycling through the gears up and down the sequential box is just as smooth and positive as you would expect from the established Japanese manufacturer. This operation is smoothed out even further with the assistance of the Yamaha quick-shifter unit.

The redesigned chassis for the 2015 YZF-R1 is another huge improvement over the previous generation. The compact dimensions and rigid feel are very reminiscent of the YZF-R6. The bike sits nicely underneath the rider, is very easy to move around on, and provides great feel when up to speed- not characteristics that the R1 has been known for in the past.

Whether riding the bike down the freeway or cutting back and forth through a set of switchbacks at the track, the bike handles like a nimble supersport. A robust frame matches the very compact chassis.

When throwing this tiny bike around and muscling it through corners, the firm motor-integrated frame design allows for plenty of feedback transmitted through the chassis for the rider to interpret. With or without the assistance of the vast array of electronic assists discussed next, this all-new chassis enables the rider to process road surface and traction data through the seat, the old fashioned way.

Suspending this nimble package above the ground is a surprisingly capable set of KYB components. The fully-adjustable 43mm forks up front provide excellent feel and respond well to even minor tweaks to the preload, rebound and compression clickers on the top of each fork. The piggyback KYB rear shock has the same adjustment capabilities but doesn’t seem to have as wide of adjustment range. Feel in the rear end is just slightly numb even when dialed in, but at this point, we’re just splitting hairs. Overall, the chassis and suspension package on the new YZF-R1 is outstanding.

As if the aforementioned strengths of Yamaha’s new superbike weren't enough, the electronics package that comes standard on the YZF-R1 puts the bike leaps and bounds ahead of the field. Right when the key is cycled to “ON” the processing power behind this bike surfaces. The bright, vibrant LCD instrument panel lights up like a tablet, displaying an overwhelming amount of information, all on the home screen:

The display also automatically adjusts from a white background during the day to a black background at night. Additionally, the rider can adjust the format from street mode to a track mode that displays engine RPM, gear position, and lap time more prominently.

At the center of the rider assist systems listed above is a six axis Inertial Measurement Unit (IMU) that measures movement in the X, Y and Z axes as well as acceleration in each. The computer processes data received from this unit at a rate of 125 calculations per second then distributes commands to the various electronic control systems.

We’ve ridden many OEM and aftermarket rider-aid systems, but Yamaha’s package on the 2015 YZF-R1 has to be one of the best overall performing units widely-available. The TCS and SCS work together almost flawlessly without any abrupt intervention that upsets the geometry of the bike, even when in a high speed sweeper. During what would become a mid-corner slide or on-throttle corner exit slip, both systems work together to neutralize the situation, but do so in a nearly undetectable manner. The unified Anti-lock Braking System (ABS) does not chatter nor vibrate under hard braking, even on dirty track surfaces. The QS activates seamlessly at wide open throttle down the main straight as well as when lazily popping into the next gear around town.

Of course, not every aspect of such an advanced and complicated system can be flawless. While the LCS allows for relatively effortless race starts, the system is a bit finicky and quicker holeshots can be produced by an experienced rider with the system turned off. The LIF system works far better than many other units out there, but the R1 still tends to pogo the front end if the throttle is opened too quickly exiting a turn. Also, the assortment of switches, buttons, and dials littering the hand controls are a bit daunting and disorienting at first. However, once acquainted with the layout, the capability of adjustment from the pilot’s seat is quite impressive.

Note: for such an advanced bike with some of the most cutting-edge technology available, why does the key look unchanged from the 1998 model? Again, we are splitting hairs here.

The technology package on the 2015 Yamaha YZF-R1 is absolutely amazing with all systems working in unison. If this is the new standard for superbikes available in the sub-$20,000 price range, it’s tough to image what innovations are next.

The handlebar, seat and foot rest locations put the rider in an ideal position for negotiating the race track. Hanging off the bike, as well as making fine adjustments mid-corner and quick transitions on switchbacks are relatively effortless and precise. Minor inputs to the clip-ons and foot pegs produce accurate results. Chassis and suspension feedback from the track surface is transmitted through the thin clip-ons and fine foot pegs, both of which also make minor reactive inputs from that information that much more accurate.

However, this aggressive stance and firm saddle make for a less-than-ideal situation on any sort of extended freeway ride. The suspension components and adjustability produce wonders on the track, but do very little to soak up the discomfort from the pilot’s seat on the street. This bike was built for the race track from the ground up and the ergonomics do not let you forget this.

Once again, Yamaha hit the nail on the head in the pricing department. With an MSRP of $16,490, the 2015 YZF-R1 drops right in the middle of the extremely competitive sportbike segment. However, Yamaha has been able to create a competitive advantage—over the Japanese players especially—by not holding back the offerings available in the base-model R1. They're hoping a boost in sales figures as well as brand reputation will cover and eventually exceed the development costs. Packaging all of the technology, capability and sensation listed above for the price of a Toyota Yaris is a truly impressive feat that the other manufacturers can’t deny.

Whether going spec sheet to spec sheet on the dealership floor or head-to-head on the race track, the YZF-R1 blows the other Japanese superbikes out of the water. Additionally, the Yamaha seems to have a slight edge on the Aprilia RSV4 and even the new 2015 BMW S1000RR, which are both in the $16,000 range. Ducati and MV Agusta need to take note because it’s going to take more than just an Italian heritage to warrant the $19,295 and $19,498 price tags on the Panigale 1299 and F4, respectively. Aprilia came to this realization and have taken action.

The Yamaha YZF-R1 has always been a contender in the superbike segment, but in model year 2015, Yamaha truly raised the bar and produced an excellent motorcycle. COnsidering the engine performance, chassis stoutness, and suspension adjustability to the technology advancements, system communication, and overall aesthetics, the 2015 YZF-R1 is firing on all cylinders. The bike may be a bit uncomfortable, aggressive, and impractical for the street, but it's an absolutely amazing track bike right off the showroom floor.

If this is what Yamaha is capable of for its top-tier liter bike, what do the engineers in blue have in store for a complete redesign of the 10 year-old YZF-R6 design?