Will it Work? On Any Sunday, The Next Chapter 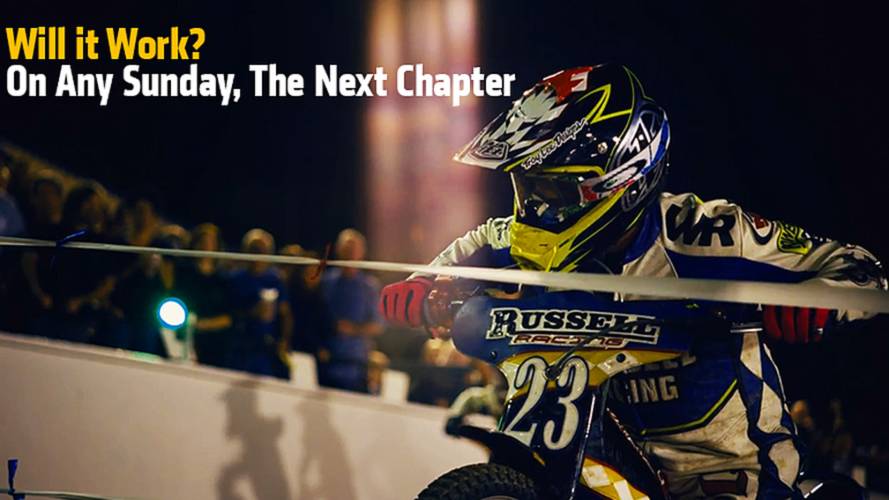 Will On Any Sunday, The Next Chapter be as good as the original.

Apparently I’ve been living under a rock, or maybe I wrote this off and didn’t believe it would actually come to fruition. But while visiting Roland Sands Designs, I was able to check out the bike they’re building for a charity event to promote the movie On Any Sunday, The Next Chapter, set to release this fall. This was the first thing that made me believe in the new movie.

First off, I wasn’t supposed to see the bike, let alone show you photos, but it’s going to be cool. Propped up on one lift, the KTM was up on blocks beside another lift with an era-correct, Triumph pre-unit done in early amateur flat-track, hill-climb fashion. Worn and torn black seat, lacquer-painted red tank with no badges, stiff tall suspension and a chopped up tail section, the Triumph had been drug out of a garage somewhere and was in near-pristine shape. It lay there, unmoved and bare with no tools around it. This Triumph was the inspiration for the team to use when constructing the new bike.

It was a manifestation of the old and new movie in two motorcycles. The two symbols of the movies sat there in all their two-wheeled glory, causing me to envision scenes of jumping dirt, racing between trees or wheeling across a beach. Now it made me believe that this new movie might work.

On Any Sunday, The Next Chapter

For me, On Any Sunday replaced Christmas movies come holiday time. We’d gather around the television like a fireplace. One Christmas my mother bought my dad the special-edition DVD with bonus features. We never saw a second of bonus features, but now we no longer had to dig out the VCR.

On Any Sunday holds a special place in my heart, so a sequel would have to live up to a high standard. My grandfather ran a Yamaha and Triumph dealership in the late 60s. His son - my uncle - flat-track raced and competed in hill climb events. An accident resulted in a two week coma followed by his death.

My grandfather and his two sons set up a couple motorcycles from the dealership for the 1971 premier at the local North Carolina theatre.

I have my reasons to doubt. See, there has already been a sequel, 1981's On Any Sunday II.  A failed attempt at making lightning strike twice, it was a flop. The sequel was just Hollywood trying to cash in on a successful name, without having any of Bruce Brown's family involved.

Bruce Brown was a man with a talent, and pretty much nothing else. He shot On Any Sunday after experiencing motorcycling for himself. Slowly moving up to bigger bikes and camping and riding with friends, he decided after the success of his legendary surfing documentary, The Endless Summer, he’d examine the world of motorcycling. "We just shot a ton of film without knowing exactly where it was going to end up. That kind of film… you sort have to see where it develops," said Bruce Brown. "I'm proud of what it did for the motorcycle community."

He took the same approach he did with The Endless Summer: little in the way of equipment, but a lot in the way of time and footage. Add that mind frame with the big-budget he received for On Any Sunday and you create a masterpiece.

A couple decades later, Bruce's son Dana stepped up to bat, producing Dust to Glory. A good attempt at his dad’s format, it has been a moderate success across the board with a lot of us riders who really enjoy it. I might be the only one that didn’t really like it, but I was given high hopes as many people insisted I watch if after I told people I liked On Any Sunday. I think a better thing to say is, if you like desert racing then watch Dust to Glory. It’s not fair to compare it to On Any Sunday.

READ MORE: Why We Ride, Movie

The question now remains - will On Any Sunday, The Next Chapter fall short? Dana has teamed up with Red Bull, who have the funding and talent when it comes to cinematography. And with guys like Roland Sands and Travis Pastrana, it’ll be hard to fail. "I hope we do justice to all the stories we come across," said Dana.

After watching the trailer, something that for a few months I had neglected to do - and maybe on some level I was reluctant to do - I have new hope. Even if the narration, script and storyline are pure crap (which there’s no way they can be), the movie would still be worth watching for the awesome cinematography and directing. Slow-motion clips of super sportbikes laid over and motorcross jumps will make it worth the price of admission.

I'm optimistic that this movie will be a success. What do you think? Have you seen On Any Sunday? Will this movie truly be an update on a classic - or will it fall short of capturing the magic of the first one? Comment below or email me at Jesse@RideApart.com. Visit www.onanysundayfilm.com for more information.