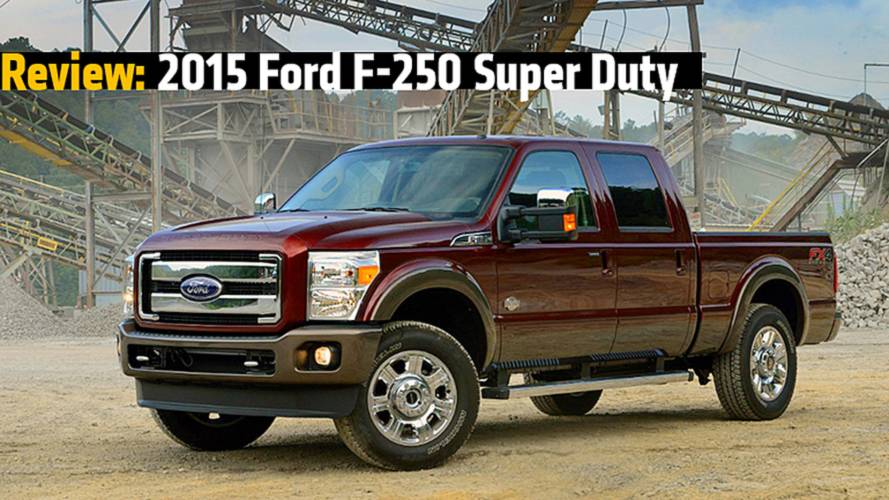 Trucks and tow rigs are but a conduit to many of us for our two wheel pleasures. And yet, we can easily spend more on them than the aggregate sum we spend on our actual bikes. In crew-cab form, full-size pickups make for a versatile big family or recreation vehicle, complete with a time-out punishment room (open-air) when the kids get too bratty.

Ford’s pickups loom large in the recreational towing universe. They’ve outsold all others for 37 years running and Ford just revised them with an epic Power Stroke diesel engine for the ages, belting out 440 hp and – please, have a seat – 860 lb-ft of torque, a sum qualified to drag around 19,000 pounds in certain civilian models. That’s also cajones enough to tow 54 Honda XR650Ls, 46 Ducati Monster 1200Ss, 38 Suzuki V-Stroms or 21 Honda Gold Wings, not counting trailer weight. In its most serious Incredible Hulk form, the Power Stroke-infused F-450 can lug 31,000 pounds or command a 40,000-pound combined vehicle weight rating, including the truck itself plus trailer. Care to relocate your garage? Your whole house?

While this might be overkill for most bikers & ATV adventurers, perhaps not. “Headroom” is an audio term for signal or power in reserve until the onset of distortion. Ford’s new Super Duty F-Series trucks offer stratospheric headroom in the non-commercial towing market. Like horsepower, you can never have enough headroom.

At the core of it all is that Power Stroke diesel engine. It generates those whopping power and torque figures (up roughly 10 percent from last year) by using a larger turbocharger than before with far more refined fuel mapping. Boost pressure is actually lowered and Ford also removed last year’s wastegate from the equation.

The turbo and its attendant plumbing is actually nestled inside the V of the cylinder banks. Yup, the exhaust barks vertically upward into the turbocharger, while the intakes feed the heads where conventional exhaust manifolds normally sit. Exhaust braking is improved too, a major benefit to those towing heavy loads on steady grades. Engine power drives either the rear or all four wheels via Ford’s strengthened TorqShift six-speed automatic transmission.

We had competitor trucks on hand including the heaviest-duty Cummins-powered Rams and Duramax-fired Chevy pickups. Towing a 12,000-pound trailer, the Ford Super Duty F-250s and F-350s proved not only tangibly more powerful and more ready for long uphill grades than the similarly classed Rams and Chevys, the 6.7-liter Power Stroke diesel is quieter.

In the finishing school department, Super Duty trucks can be had with Ford’s King Ranch package, which includes special cowhide and insignias throughout and through-in, denoting the famous working Texas Ranch. It’s a bit kitschy, though, with a snake sewn into the leather console lid and other Kingly reminders ever-present. The King Ranch seats proved super-supportive, too. Ford’s alternate Platinum upgrade package offers leather and other trim and equipment inside and out, too, but with a more reserved touch.

Despite the upgrade King Ranch and Platinum interior finery, the Ram Laramie on hand for comparison purposes showed a more intuitive, more attractive multi-function control center in the dash where audio, climate, navigation and other secondary tweaks are made. Also, Ford’s stalk-mounted manual transmission control and it’s thumbwheel operation felt awkward, especially for someone with little heavy-duty tow rig experience.

Ford trucks have been big-time news-catchers lately. Ford dipped not just its big toe, but most of its right leg into the aluminum pool, bestowing the 2015 F-150 pickup body with the lightweight metal. This removed about 700 pounds from the F-150, which will net big gains in fuel economy. The F-250, F-350 and upper pickup truck models retain steel bodies, though.

The new 2015 Power Stroke-powered Ford Super Duty pickups clearly best their chief rivals in key areas of performance, towing capability and livability. The 2015 Expedition provides silence, comfort, a modicum of efficiency with the new EcoBoost V6, better towing ability than its rivals and huge interior space in the long-wheelbase EL version. Hell, you may not need to book a hotel room on your next bike-towing trip.

- Lacking of “hitching” on the highway (Super Duty)

- Center dash multi-function navigation, audio and climate control not as intuitive as Ram’s