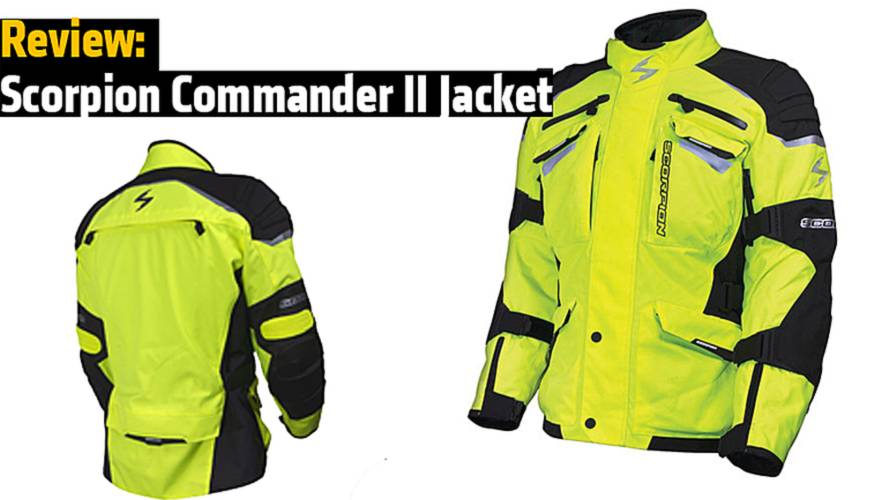 Scorpion Sports Inc has been making motorcycle helmets and apparel for about 10 years now. They continue to grow and refine their products pushing into new areas of motorcycle apparel. They own/operate their manufacturing and warehouse facilities allowing them to adapt and change designs with new features or modifications that need to be added or tweaked.

Scorpion's Commander II jacket is part of their XDR series of riding apparel. There is continued growth in the all weather, all conditions gear market and more gear is planned.

The Commander II is a three layer four season jacket. The inner most liner is a full sleeve EverHeat thermal liner. The middle liner is a full sleeve AirGuard waterproof and windproof liner. The liners fit in the jacket easily. Scorpion uses a simple to operate snap system that is color coded to make it easy to line everything up. When the liners are removed there are multiple velcro cinch straps to keep the jacket fitting nicely. Multiple exterior and interior pockets make carrying your phone, wallet, keys, and whatever else easy. The zippers all work smoothly and the main closer is a YKK dual pull zipper.

The exterior of the Commander II is a water resistant 600 denier poly construction that's coated with a waterproofer. It does an admirable job of repelling water. We were able to test it in some moderate rain riding a Triumph Scrambler. Riding for 30 minutes in stop and go as well as at highway speeds no water got to the rider. That's not to say it's impermeable but it does a better job than advertised.

Ventilation is accomplished through two chest vents, two under arm vents, and a back exhaust vent. This is the weakest point of the jacket. The chassis is designed to be breathable and it is a little. It loses some of the breathability because of the water resistant treatment. The vents are covered by a waterproof zipper, which is a really nice touch, making the liners job easier to keep everything dry. The problem is the vents are small. They would be better served by being another inch wider to allow for adequate air flow. In warm weather the jacket does not flow enough air to keep you cool. This is exacerbated when riding behind a wind screen. The under arm vents are partially blocked by the velcro adjusters on the upper arm. If the vent was longer to compensate for the lost surface area it would be a big help.

I would rate the Commander II as a three season jacket, winter, fall, and spring. It is just too warm for the summer months.

Fitment runs a little on the slim side. We tested a size large designed for a 42-44 inch chest and it's a little tight along the lower edge of the jacket. With no jacket bottom adjustments it tends to bunch up when seated and is too tight when worn over riding pants to ride off road.

For reference I am 6 foot 1 inch, weigh 200 pounds with a 42 inch chest and a 36 inch waist. There is plenty of room and adjustment in the arms, the neck opening is lined and super comfortable. Two sided waist adjustment allows for the wearing of the liners, base liners, or simply a sweatshirt if need be. The front of the jacket uses a magnetic closer system which more manufacturers should use. It is then dorked up with two buttons at the bottom of the jacket making the whole process harder than it needs to be. They are rubber coated but compared to the rest of the setup are clumsy and annoying. The cuffs are velcro adjustable and there is a forearm zipper to make removing the liners easier.

Scorpion uses Sas-Tec CE approved armor for the Commander II. Similar in concept to D3O armor that it remains soft form your body heat and then hardens under impact it's flexible and comfortable. I really like the elbow armor as it also covers the forearm almost to your wrist while not being intrusive.

At $329 the Commander II has some pretty stiff competition. Alpinestars Andes Dry-Star jacket, Olympia's Dakar, and Firstgear's Kathmandu all are around the same price and offer more features. The Commander II is not a bad jacket, it could just be better.

Overall we rate the Commander II as "Average" for lackluster ventilation and no jacket bottom adjustment. Stay tuned for some other Scorpion gear that are top performers.