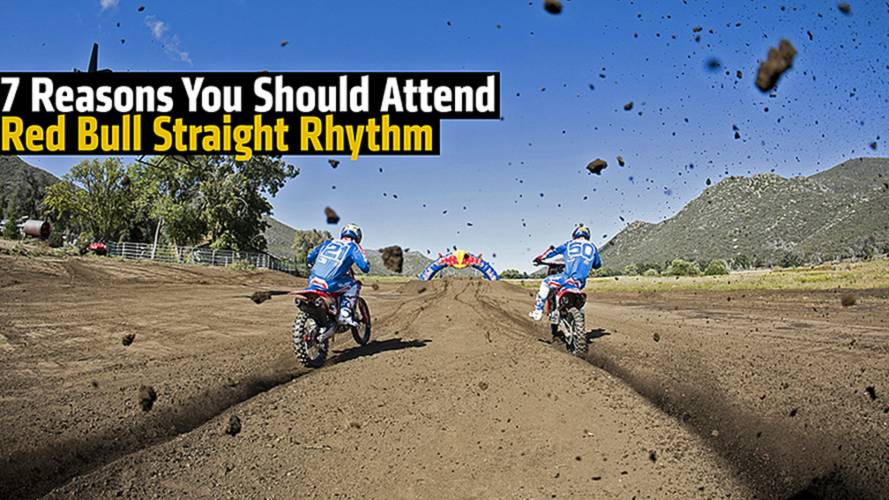 7 Reasons You Should Attend Red Bull Straight RhythmNo, this isn’t some paid ad-editorial, Red Bull did not put me up to this. I really think this...

No, this isn’t some paid ad-editorial, Red Bull did not put me up to this. I really think this weird experiment of a sport might just pay off and you should attend... that is, if you’re in LA in October.

In case you’ve been living under a giant asphalt rock, you’ve probably heard about Red Bull Straight Rhythm. We reported on it back in June, but for those of you who don’t know: It’s a motocross drag race. Two riders on a 1/2-mile track with table tops, jumps and whoops, in a straight shot from one end to the other. A race typically lasts less than a minute. The event starts with 32 riders in two classes for a best-out-of-three elimination.

Races are held at one of the most famous drag strips in the country, the Auto Club Raceway at Pomona. It’s the oldest and possibly most well-known venue on the NHRA drag racing series circuit. The event takes place October 4th, 2014 and cost $20 to get in the door.

It’s a straightened out motocross track and experimental form of racing. So, what does it mean for motocross and why should you care? Here are 7 reasons why.

Where in the world does this company get its money? For Red Bull, marketing is no longer about sponsorships and individual athletes smiling for the camera drinking a Red Bull, sighing and saying, “the next generation.” Instead it’s about entire events, lifestyle, movies, TV, sports and real life.

Red Bull’s F1 deals alone total enough money to run a normal company into the ground. Red Bull has spent 1.2 billion (yes, with a B), according to Forbes Magazine, in the last decade on F1 racing alone.

But, apparently the Red Bull marketing team knows what it's doing. Red Bull is a publishing and marketing company that just happens to sell energy drinks. I’m banking that On Any Sunday, the Next Chapter will be a success thanks to them.

With things like the seemingly-silly sport of Flugtag, something you’d probably not normally watch, has become a textbook example of experiential marketing and a big success. So, will Red Bull Straight Rhythm also be a marketing success? Probably.

April, 2004 was the first Formula D North America event, held at Road Atlanta. A new step in evolution of motorsports, our NASCAR forefathers were laughing at these punk kids purposely sliding through corners. Naysayers: A sport? Really, you call that a sport?

It might seem odd, but in the early-2000s, drifting was seen as an unnecessary way to get a younger audience into motorsports and a stretch to call it a sport. Projected to be a short-lived fad, now it’s commonplace, as every 16-year-old dreams of owning a LS-swapped Nissan 240.

So, the question remains, will Red Bull Straight Rhythm, be a short-lived fad like drifting was thought to have been? Or will it become commonplace?

The younger audience on a large-scale isn’t able to grasp motorsports. There is a lacking connection and attendance has been down since the ‘80s. There aren’t many household names around and an event like this might just change that. Simple, straight forward (literally) and short. This might be a great way to gain the attention of the younger generation.

Red Bull has announced most of the starting lineup. Broken into two classes of bikes, Open and 250cc, there are 16 riders in each class that will face head-to-head, in best-out-of-three eliminations.

Only 8 riders in the 250cc class have been announced thus far:

Say what you will, but Travis Pastrana is a name that now transcends far outside the sport. After sitting out of professional motocross racing for 5 years now, he’s returned with a purpose built bike.

This bike is worth it in itself to just attend the race. A Suzuki RM, with a 500cc 2-stroke, it’s gnarly to say the least. We’re currently awaiting word from Travis’ team to obtain some more info and photos on the bike.

The bike used to be a 450cc, and the last bike Pastrana raced professionally. The Open Class rules allow for more powerful, bigger-CC machines, unlike traditional motocross that limits the big boys at 450cc.

Ok, so if you can’t be there, just watch it on TV. Red Bull is gathering a bunch of extreme sports for the Red Bull Signature Series, “a collection of the most progressive action sports events in the world,” according to Red Bull. The Signature Series will air on NBC on Saturday, December 20 at 4 p.m. ET/1 p.m. PT. For more information, visit www.redbullsignatureseries.com.

Because it’s just like excite bike, but without as much overheating. You’re welcome.