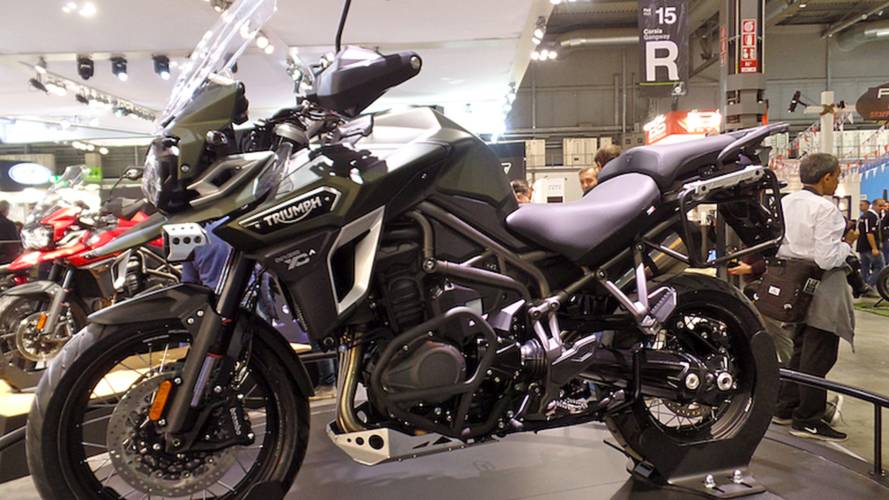 Perhaps taking to heart the idea that there's no such thing as too much of a good thing, British manufacturer Triumph has unleashed no less than SIX different versions of its updated adventure touring Tiger Explorer.

This new range of Tiger Explorers follows a trend started last year with the Tiger 800, for which there are presently eight different variations.

Picking Out the Differences

In the case of the new Explorer, the theme will be one of a 1215-cc inline triple, powering a shaft-driven adventure machine designed to go toe-to-toe with the likes of the BMW R1200GS. No power figures have been given, but the old Explorer (which is aesthetically difficult to differentiate from the new) delivers roughly 135 hp. Expect more from the new.

Beyond the engine and frame, exactly what else you get seems to depend on the combination of Roman numerals you choose to go on the back of the Explorer's name: XC, XCx, XCa, XR, XRx, or XRt. (Yes, I know that some of those letters aren't actually Roman numerals.)

Triumph so far hasn't offered much clarification on the difference between models, but for the fact they can essentially be divided into two groups: XC models are suggested to be more off-road ready, whereas XR models are better suited to staying on pavement.

It's probably safe to assume the top-end (read: "most expensive") XR and XC variants will be packed with the greatest amount of techno whizbangery. And Triumph are offering a lot of it. Indeed, it is here where the differences between the old and new Explorer models are most obvious.

Semi-active suspension, cornering ABS and cornering traction control are some of the biggest updates. It appears it will be possible (at least on some models) to switch ABS off.

Up to five different rider modes will be available, one of which can be programmed by the rider. An assisted hill start feature will help keep the roughly 530-pound Explorer (that's how much the old one weighs, at least) from becoming unmanageable when loaded with passenger and luggage.

At this year's EICMA show in Milan, Triumph managed to draft genuinely swell fella Charley Boorman to serve as its "adventure ambassador" in launching the Explorer. That's perhaps something of a coup, considering Boorman and his friend, Ewan McGregor, famously travelled the world on BMWs after originally seeking to do so on KTMs. And it's a sign that Triumph wants to be seen as very much in the same league as those other two manufacturers.

There may also now be competition from Ducati's new Multistrada 1200 Enduro, but almost certainly BMW and KTM will be the names to beat in big adventure touring for quite a while.

As someone who had spent many hours debating the possibility of spending his own money on the old Explorer, I'll admit to being pretty intrigued by the bike's new face. And skeptical. Triumph don't have the best track record when it comes to getting things right the first time (ask William Connor). Still, the temptation is there -- especially because it's likely a fully equipped Explorer will cost less than a BMW R1200GSA. Not a lot less, but less. Probably.

Triumph have not yet announced pricing, nor given a date as to when to expect the new Explorer in dealerships. If it follows past convention however, we'll probably see this machine on sale in late winter or early spring.