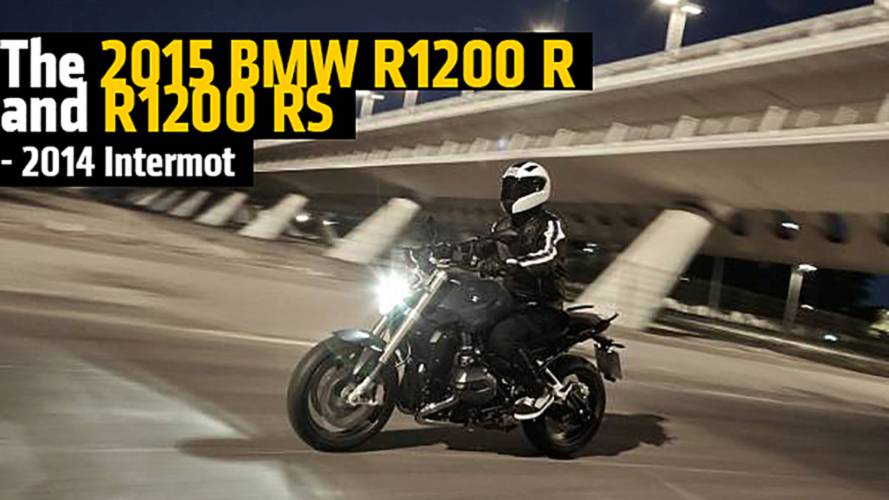 In addition to the S1000RR, BMW released information about two additional bikes at Intermot this year. One is being marketed as "the boxer roadster for the keen rider" while the other is being called "a new dimension in sports touring." The R1200 R and R1200 RS completes with a multifunctional onboard computer which is great for checking the wide variety of integrated sensors. A new intake air duct and central radiator for ultra-compact front silhouette has been added to the two BMW bikes.

The classic wheel suspension concept uses an upside-down telescopic fork at the front and EVO Paralever at the rear. Upright seating position with front bias for a dynamic riding sensation has been combined with excellent seating comfort for longer tours. The pair of motorcycles include the latest-generation Dynamic ESA (Electronic Suspension Adjustment) as an option for optimum riding dynamics in any situation.

Both balance nicely due their low center of gravity, and each has their own unique features.

The R1200 R comes as a bit of a surprise. This is a naked cousin of BMW Motorrad's R1200 line (the R1200 GS, R1200 GS Adventure and the R1200 RS). The R1200 R boasts the same flat twin boxer engine as the others; according to BMW, it produces 125 HP at 7,750 RPM, developing peak torque of 93 lb-ft at 6,500 RPM. Dynamic Traction Control, ABS, and Automatic Stability Control are touted by BMW; this, the brand says, offers riders numerous modes (5 total - Road, Rain, Pro, Dynamic and User) to play with depending on road conditions.

READ MORE: 7 Places a Motorcyclist Should Avoid in Traffic

The 2015 R1200 RS looks to be a sport touring version of the R1200 R. Engine performance looks to be the same as the R, and the bike has the same ride-control features. The DOHC drive unit is the exactly the one that powers the R 1200 GS and R 1200 GS Adventure bikes and clocks in at 125hp with 7,750rpm, just like the R1200 R above. A new chassis has implemented with a tubular steel bridge frame making the engine act as a self-supporting item.

The primary difference between the two is the sportier design of this bike.

READ MORE: What The Color of Your Motorcycle Says About You