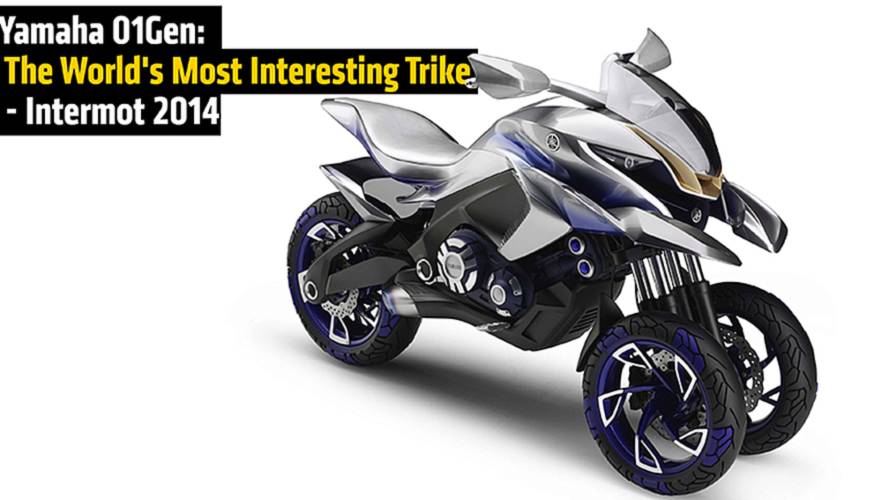 The Yamaha 01Gen trike is unveiled at Intermot . Does it represent the next generation of riding vehicle?

No, that's not a typo - Yamaha brought a trike to Intermot this year. Dubbed the 01Gen, it's perhaps the most striking factory-built three-wheeler we've ever seen. And its ambitions go beyond its looks - Yamaha believes that this three-wheeler will function off-road and on pavement.

Those of you who don't like beaks on their bikes have two reasons to dislike the 01Gen; those of you who are Halo fanatics will want one in Army Green, with "UNSC" painted in big white letters on the side. It's a intriguing concept - those beaks are there for a reason, as Yamaha believes it'll function as a dual-sport machine, although they don't exactly say how. It's hard to know what the 01Gen can really do. Yesterday Yamaha issued a press release, but it doesn't offer any real specifics:

The on & off crossover of the concept refers to the multi wheel's command over a variety of terrain - both on-road and off - that is grounded in the maneuverability unique to the format. A distinctive feature is the seamless design that sees the front and back overlap and interlace with no distinction between the two. The shape advocates a new and racy design expression evolving from the harmony of interweaving the mechanical framework with the flowing body line that makes the most of the volume of the double front wheels.

There aren't a whole lot of photos of the 01Gen, but the video below should give you a pretty good idea of its relative size. As to its performance capabilities, Yamaha has not provided any info on the trike's powerplant. It appears that the 01Gen's front wheels are mounted on individual forks, as is the case with Yamaha's Europe-only Tricity three-wheeled scooter. This setup allows for the trike to lean when turning. Reports also indicate that the rear wheel is belt-driven.

READ MORE: Is A Trike A Motorcycle?

Will the Yamaha 01Gen go to market? That's an good question, as it speaks to what people are really looking for when considering vehicles that have less than four wheels. The Can-Am Spyder has carved out a small but noticeable niche for itself, promising as it does the allure of "uncaged" travel with the (real or perceived) safety of that third wheel. Piaggio three-wheeled scooters are not an uncommon sight in major U.S. urban and suburban areas. And even Harley finally caved, launching the Tri Glide Ultra Classic in 2009 and the Freewheeler in 2014.

With many people looking to motorcycles as a cheaper, eco-friendly alternative to their cars - and many older riders who aren't ready to hang up their leathers - Yamaha might be making a statement here. We'll be interested to see what happens with this usual machine.

What do you think about Yamaha's 01Gen? Would you ride one? Let us know in the comments section!