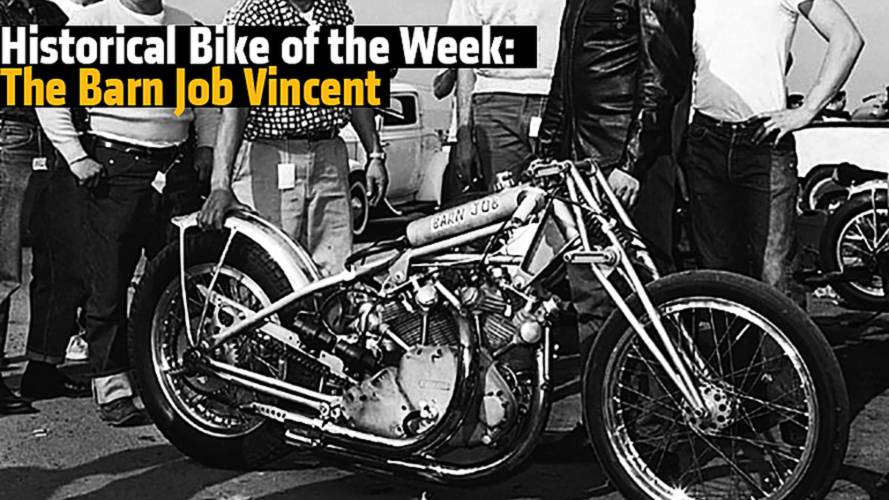 Jesse gets the rare opportunity to spend time with the Barn Job Vincent, one of the most famous drag bikes ever built.

There are some days that make being a motorcycle writer and editor all worth it. After weeks of scheduling, strenuous deadlines, managing freelancers and reviewing bikes, once in a while, there’s a day so cool that the stressful months leading up to it are all worth it.

Occasionally I'll have the type of bike-centric experience that when I explain it to my cager friends, they have no idea what the hell I'm excited about. A weird story that has them say, “oh, awesome,” with such vague, faked excitement. But to me, it was an unexplainably cool thing I’ll tell my kids with joy, to which they'll in turn fake smiles and nod their heads until I’m done talking.

Last week I got to examine one of the most historic and record setting drag bikes every built: the Barn Job Vincent , based off of a 1949 Vincent Rapide, 1,000cc air-cooled V-twin.

“To call that same motorcycle a Vincent today is merely a courtsey to the manufacturer, so radical is the metamorphosis that leaves only an engine shell to hint of its heritage.” This was how HOT ROD Magazine described the bike in 1960, as printed in Motorcycle Drag Racing: A History.

The only thing left untouched on the bike were the crankcases and timing cover. Almost immediatley the 61ci engine was bored to a 96ci with homemade billet aluminum pistons. Intake valves used parts from a Mack truck and the pushrods were made from C-1144 steel.

This was the photo taken for HOT ROD Magazine. The last I heard, this was a staged shot, and Clem is the guy in black behind the curtain. The team is mixing nitro, which greatly improved performance over any other type of race fuel of the time.

It was a display of engineering talent from an unknown builder, in an unknown shop, in a quiet New England town, that set records across the nation.

A few weeks ago I stumbled across the bike at Deus Ex Machina while waiting for a ride to start. I thought it was a clone and not the real thing. The aluminum frame, Hilborn mechanical fuel injection stacks and Vincent engine all seemed too clean to be real.

The bike had just traveled to Sturgis with the Deus crew and when it returned, the current owner John S. Stein didn't have any room for it and asked the main honcho at Deus, Julian Heppekausen, to keep it in the shop. Naturally, he put it up on the table surrounded by copies of Iron & Air and T-shirts I’d never be able to afford.

A couple weeks later sitting at home I grabbed a copy of Motorcycle Drag Racing: A History, by Gearhead Publishing. This was a  gift from a long-time college and friend, Dave Wallace, the former editor of HOT ROD Deluxe; the book was written by John S. Stein, who had since returned the Vincent to his living room.

I found a listing on Gearhead Publishing and called. He promptly answered, as the listed business number was his cell. “Hey, I’d like to have your permission to publish some photos of the Barn Job.” to which he responded, “Yeah, it’s in my living room, want to come by?” About an hour later, I was standing between it and a twin-engine, pre-unit Triumph.

John's home is hidden inside a quiet Malibu neighborhood. His living room was lit by a stand-up antique lamp, and I was accompanied by two rescue Labradors as John told me of how he and the Barn Job came to be.

Clem Johnson was a timid machinist from Buffalo, New York. Quiet and unsuspecting, he wanted a fast bike for drag racing, so why not start with one of the best? He picked up a Vincent Rapide and made history.

Little by little the bike was altered, until it became a creation all to Clem, no longer resembling its former life as a Vincent. John had always been a fan of the bike since he was a kid. He made his living in the advertising industry, settling down in Malibu. Always a fan, but never really a builder or racer himself, he first met Clem at a Southern California bar, where local drag racing legends got together once a week.

He asked Clem about Barn Job, but he wasn’t serious about selling it at the time. He bugged him about the bike for a while, until he gave John one of the cams he hand built. The original cams were too soft and the extreme lobe he required scared off any reputable cam manufacturer, as they wanted nothing to do with it. So naturally, he just built it himself (Check out the extreme lobes and holes drilled in for lighter weight).

According to John and his book, Barn Job was one of the very few bikes that had every mechanic and racer in the pits stop what they were doing to watch run. It was a notorious, scary machine that gained a reputation around the drag racing community, eventually landing a spread in HOT ROD Magazine in 1960.

John gave up hope on buying the bike after Clem refused for a few years, until one day Clem asked if he was still serious. John later found out that Clem had asked around to see if John was a good fit to take care of and own the bike. He was also offered more money than the agreed upon amount, but stuck to his word and honored John's agreement.

On December 2nd, 2013, Clem passed away and John was there at the funeral with Barn Job. He said it was a gigantic gathering of the greats in drag racing and the best way to honor Clem.

Barn Job hasn't been fired up or ridden in almost 20 years - John doesn't exactly know when the bike was last run - but standing beside it, in a quiet, ill-lit living room had my mind running wild with thoughts and sounds of the Barn Job in its heyday.

John is a middle-aged, timid, confident man, purely excited about motorcycle history. John reminded me of how he described Clem, shy and intelligent. He's not too technical and not too rider focused, but it seemed he was fascinated with learning about everything, bike-related or not. He asked me a lot about myself and after showing I could hold my own with technical talk, John jumped with excitement, "I know you have to go, but let me show you one more thing." That's when I knew I was about to see something cool.

This was a manual all Vincent owners received with their new bikes.

John hurried into his two-car garage filled with a Porsche, racing posters, and piles of incomplete projects. A half dozen 2-stroke race bikes were scattered about. He picked up a race piston from Barn Job. Holes were drilled into the side of the piston and replaced with nylon bushings to save weight while the piston centered in the cylinder.

READ MORE: Bikes Of The Week from RideApart

Off to one side sat the most popular bike in his collection, a drag bike with three Kawasaki 2-stroke, 3-cylinder engines. It was a showcase for the type of overkill in multi-engines in the 60s/70s drag racing world.

He pulled back a sheet cloth with a big grin to show an early BMW side car and '50s model R series single-cylinder BMW.

I finally left that evening with a handshake and a warm goodbye from John. You never know the cool people you're going to meeting in motorcycling.

John's book, Motorcycle Drag Racing: A History, is a great, in-depth few of the history of motorcycling drag racing, touching on almost every genre and decade since the start. Visit GearHeadPubishing.com to purchase the book yourself or read more about John and his collection.