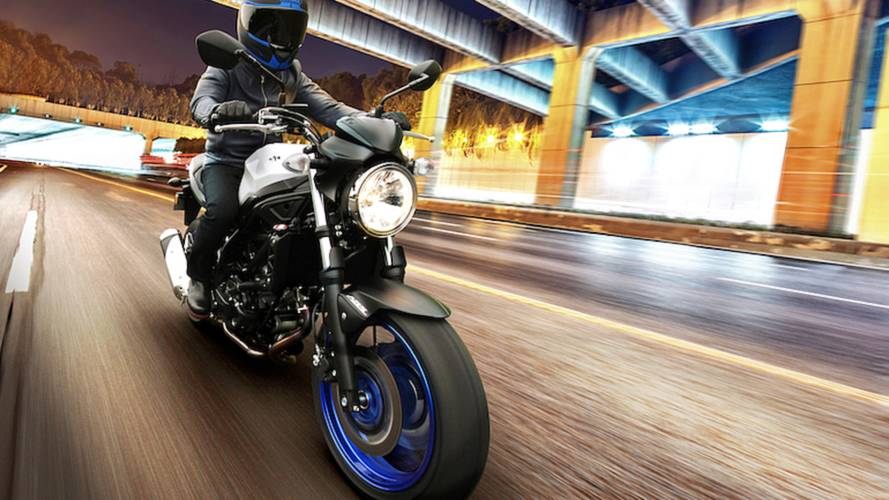 2015 marks the return of the Suzuki SV650, the latest bike to be revamped by the company.

One wonders if perhaps Suzuki has misinterpreted the "retro" trend driving motorcycling these days. Rather than offer up bikes styled to look like those from the 50s and 60s, the Japanese manufacturer has fallen into a habit of simply bringing back old models.

Last year, we got the Bandit back. Fingers crossed for the return of the Cavalcade, I suppose...

In the meantime, there's the punchy 645cc liquid-cooled V-twin of the Suzuki SV650. The bike was first introduced 16 years ago and soon developed a cult following thanks to its do-all nature. In the United States, it became a particular favorite in club racing where it served as a reliable and friendly tool for those who are new to the track.

The bike became the SFV650 Gladius in 2009, and although a number of moto-journalists sang its praises, it didn't seem to strike quite the same chord with the general public. So now the old SV650 is back.

Though, it's not quite the SV650 we once knew. Firstly, it is equipped with the same steel chassis of the Gladius. Secondly, according to Suzuki, the bike has been updated with more than 60 new and redesigned components.

I'm unable to find a list of exactly what those components are, but they and all the other bits add up to a reasonably accommodating curb weight of 434 lbs. in the ABS version—a few pounds less if you want brakes that lock up.

The bike is equipped with the Easy Start system that was first introduced last year on the GSX-S1000, which means the rider only has to tap and release the ignition button once, and the starter motor will automatically turn until the engine fires. Because, you know, holding down a button is really hard.

More useful features include the SV650's new Low RPM Assist feature, which helps prevent stalling when the clutch is released.

Suzuki claims the bike is capable of returning a whopping 73.5 mpg, which makes it an ideal commuter. However, using it solely for the day-to-day slog might mean missing out on another new aspect of the SV650: increased horsepower.

Suzuki claims the bike now delivers 75 hp at an accessible 8,500rpm—up roughly 5 hp from the old SV650 and Gladius. The manufacturer also boasts that the bike's 30.9-inch seat height is lowest in its class—another feature that suggests a bike well suited to newer riders or those stepping up from less-powerful machines.

The SV650's all-digital dash is set to offer a wealth of information, including gear position indicator, average fuel consumption, fuel range (one of my favorite features on my V-Strom 1000's dash), fuel gauge—as well as useful stuff like speedometer and tachometer.

The bike is equipped with an LED tail light and will be offered in four colors: red, white, blue, and matte black. I saw the matte black version on display at EICMA and it was surprisingly attractive.

Suzuki have also teamed with SW-Motech to develop a number of accessories personalize the SV650 and increase its usefulness. Prices are yet to be confirmed; it's expected to be in dealerships by early spring.