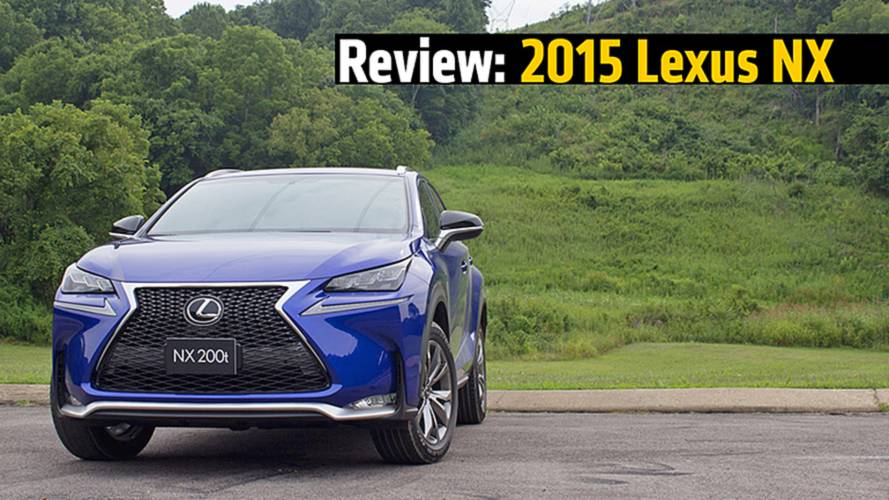 We check out the 2015 Lexus NX, the power, exterior, interior, and what it's like to live with the Lexus NX.

Nearly 20 years ago, Lexus was among the first automakers to jump in and revolutionize the family hauler, by introducing the car-based RX300 sport-utility vehicle. Content with the runaway success of the RX, Lexus introduced subsequent evolutions of the midsize SUV, but sat by the side as Acura, Audi, BMW, Mercedes-Benz, and Volvo — among others — set about creating new SUV niches based on successful car platforms.

Now, in a market crowded with “premium” SUVs being marketed to the ever-important millennial shopper, Lexus is entering - and upping - the game with their more compact NX: a cute-ute designed to steal sales and win over a new and next generation of buyers with a neatly designed package made to transport all the gear needed for the week and to become the best weekend warrior.

However late to the party, Lexus is coming strong into the game with two distinct offerings: the turbocharged NX200t and hybridized NX300h models. The two 'utes, available in front- or all-wheel drive, are based loosely on the Toyota RAV4 but share few major parts.

With the NX, Lexus hopes to play in a segment the brand neglected while its competitors have flourished and take back its share of the voice. DriveApart recently spent time with the two NX models — NX200t F-Sport and NX300h — to see how they stack up.

The first thing you notice about either member of the NX dynamic duo is their razor-sharp exterior styling, punctuated by creases and angles uncharacteristic of the Lexus brand that cemented a reputation for soothing blandness. It's this kind of visual statement that would have been unthinkable for Lexus just years ago and we really like where the brand is going.

The front of the NX features a beaker-shaped grille with some slim LED boomerangs mounted above lower driving lights. There's a lot of shiny, louvered real estate in between. In the rear, frown-facing boomerang taillights emote as well, but with less shock and punch than the sexy front end.

Distinguishing the NX models are some unique styling cues. The most aggressive treatment is found on the NX200t F-Sport, which adds shinier wheels and an even taller-looking front fascia. The effect is toned down on the NX300h, calling attention to the NX’s large front overhang, but similar when viewed dead-on. We imagine that a fender-bender involving a grille this complex will not be an easy or inexpensive fix.

While the styling takes some getting used to, early adopters can guarantee that they won’t lose their NXes in a crowded lot. (There no telling what happens if the NX gains a sizable following.)

The story is different inside, where familiar Lexus traits are present and there are fewer rough edges. If you’re familiar with the most recent RX sport-utility vehicle and CT200h hatchback, you’ll feel at home among the simple-to-read gauge cluster, inset transmission lever, and high-mounted climate and audio controls. Keen eyes will note a continuation of the boomerang design theme in the tall center stack.

And although the NX deserves credit for featuring actual buttons instead of relying on a center screen for all commands, there are some ergonomic flaws: the switchgear feels too similar to the touch, and is often placed beyond arm’s reach. If this average-height driver came away frustrated, it’s unclear how shorter drivers will do. We do like the chunky, uncluttered steering wheel, but care less for the clunky, pop-up-style navigation system that requires the use of a center-mounted touchpad.

Interior room is spacious in front, although rear passenger space felt compromised by lack of legroom, shoulder room, and hip room. Credit goes to the trunk area for being accommodating without requiring a high liftover angle.

Besides its impressive design, the NX is also a turning point for Lexus in terms of powertrain. The NX200t is the brand’s first implementation of a turbocharged engine—in this case, a 2.0-liter, 235-horsepower unit paired with a 6-speed automatic transmission. The NX300h benefits from the tried-and-true 2.5-liter four-cylinder engine and battery pack found on the ES300h, with a total output of 194 horsepower and 105-kW from the electric motor.

In the NX200t, the turbocharged engine translates into energetic off-the-line sprints but a somewhat less than turbo overall performance. Power delivery is linear, as is braking performance, but the engine emits a rough, inelegant growl as it builds speed and we wish there was a little more boost. Ride quality in the F-Sport model tested was neither soft nor harsh, which was a pleasant takeaway given the NX’s rough-looking attitude.

The surprise of the duo is the NX300h, which is arguably the driver’s car of the two. Thanks to extra boost from the electric motor, power builds quickly and surges again when you stomp on the gas pedal. (We weren’t looking to break any fuel economy records.) The result is a lively setup, paired with a refined continuously variable transmission. Typical of Lexus hybrids, however, is a spongy brake pedal with an abrupt engagement point.

What can you haul in an NX? Although we didn’t have the opportunity to test out the small SUV’s hauling prowess on a limited street drive through Nashville, the NX seems more than capable of accommodating an active lifestyle. We can imagine tossing a weekend’s worth of picnicking and hiking equipment into the rear compartment, but bicycles—even disassembled or folded—would be a stretch and a bike rack would be needed. Same goes for a kayak, which you'll need to roof mount.

The NX’s strength in cargo capacity is its wide, rectangular loading bay. With the rear seats folded, space increases at the expense of seating, although the floor is not completely flat. Bring your boating gear, artisanal home brewing kits, spinning gear, or what have you, and you’ll find the NX as able as any of its competitors. A bonus is the optional power liftgate, which makes loading much less complicated for those too tired from working out to lift the rear door.

The majority of our first drive of the NX200t and NX300h occurred on city streets, where we found it easy to maneuver and park the SUV. The NX may lack active parking assist and “around-view” cameras of some of its competitors, but its compact size and sensors made parallel parking easy. Once it was parked, the NX attracted its share of onlookers curious to know which space-age SUV had joined the ranks. Regardless of your personal views on its looks, the NX is and will remain a conversation piece, and we like that.

It’s no secret that Lexus is seeking to attract a cohort of younger, affluent buyers, and the NX is a step in the right direction. The design is edgy enough to move eyes off the Acura RDX and Lincoln MKC, and its performance is no less competent than most other competitors. Reliability is yet to be determined, but we imagine that more than a few millennial buyers will be swayed by stories of reliable Lexuses in the family.

Younger, tech-enthused buyers will appreciate the NXes’ accessibility with smartphones and apps, which pair seamlessly through the clear infotainment system. What most millennial shoppers lack, however, is perspective to notice that the doors slam with a tinny sound—unlike many of its German competitors’ confident thud. For a young crowd of up-and-comers, details like those won’t matter much.

Overall, we like the NX for its sass and its aggressive styling, and are OK with its softer-than-it-looks driving dynamics. Bringing a compact SUV to market seems the right step for the brand that helped invent the car-based SUV segment and was then content without branching out into smaller or different takes on the SUV.

It’s a good move, and not a moment too soon.