How To: Easy Fork Seal Repair 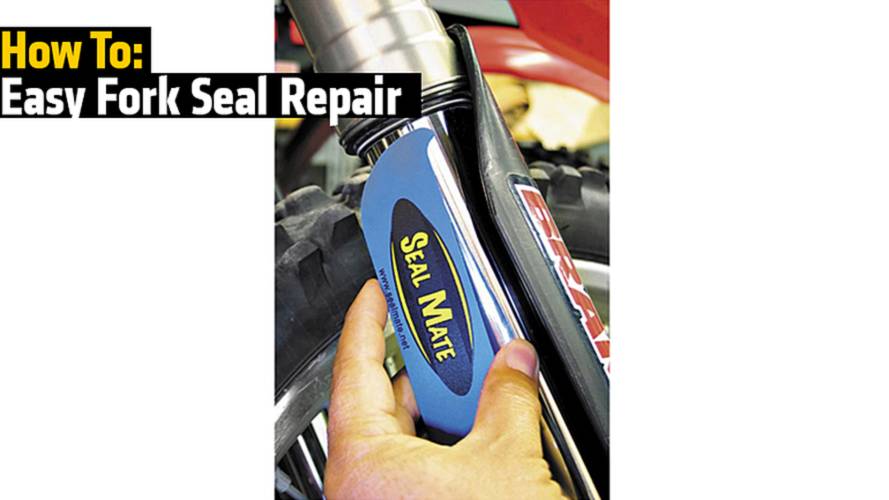 Quick and easy fork seal repair. RideApart helps save you some dough!

A buddy of ours stopped by the other day with a problem. His front fork seals were leaking. This can be caused by a variety of conditions. Leaks can happen after major impacts to the front forks, often times caused by large pot holes or wheelies. Dirt can become lodged in the fork wipers and seals creating a gap that oil seeps out of; this is very prevalent in off road riding. Another major issue is damage to the fork surface itself. Years of hard riding and foul weather can put dents, scratches, and pit marks on forks so that they won't seal properly. If the issue is damaged forks, or the seal is ripped, this sealing process won't work.

So what do you do? Well, first you need to figure out which of the above issues you are dealing with. In this case we are going to look at the easiest one - dirt and debris in the fork seals creating a gap for the oil to escape. There are two ways to tackle this. One is to remove the front wheel, remove the fork legs, and replace the seals. The other is a neat little tool that allows you to pop the seals and clean under them and then seat them back in place without removing the fork legs.

The Seal Mate is a handy little tool that saves you a ton of money. My buddy went from possibly spending $300 to spending under $10. Check out the video below on how it works and tell us in the forums what tech tips you use maintain your seals.

Once you have repaired, replaced, or cleaned your fork seals, take care of them. Wipe dirt, bugs, and road residue from the fork tubes. If you have fork guards, make sure they are lined up properly and if you ride off road look into additional fork protectors. Several manufacturers make simple neoprene wraps that keep mud, dirt, and rocks from damaging your forks.

What are some fork seal repair tips that have worked for you? Tell us in the Comments section!