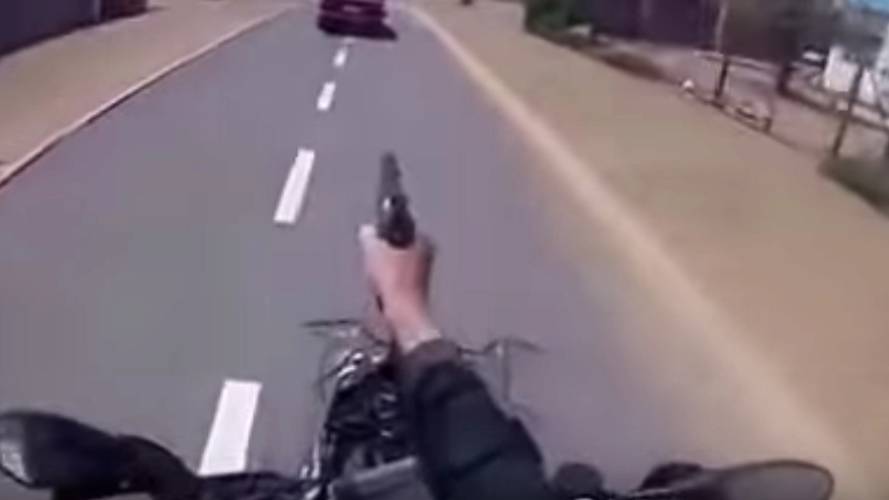 A South African motorcycle cop opened fire in pursuit of a stolen car. Watch the video, read the report, and then decide whether it was justified.

I'm amazed that in my entire motorcycle career I have yet to be pulled over by a cop. I have definitely broken some speed laws on a bike and pushed my own boundaries in the canyons, but to date I have been lucky. I’ll knock on wood and continue my hot streak as long as possible. What I really could not imagine is a motorcycle cop firing at me while riding his bike.

READ MORE: Watch This CBR 600 Motorcycle On A Long Police Chase In LA, Stunting All The Way | RideApart

Let us imagine for a second that a police officer here in the United States opened fire from the saddle of his motorcycle? Wouldn't that be insane? Well in South Africa it seems to have happened a couple of times this year. We have been exposed to lot of police shootings recently, but nothing quite like the video below.

Before feeding into the social media hysteria fueled by this video, I have included the report from the South African local new station below. Watch the video and also read the report, then you can decide if this cop's actions were justified.

During the incident, it seems that the officer hit his intended target (the car) with each fired round. However, I am curious about the first two rounds he fired—the distance seems to be 15-20 yards while in motion, which has to be difficult as there is no discernible evidence he hit the car. I could also be wrong.

I was curious to find out if firing a sidearm from a motorcycle is standard procedure here in the United States or is even part of rider training. Unfortunately, I was unable to reach my LAPD Motorcycle Cop contact for comment.

The chase started when police picked up on the tracker signal from a car that was stolen during a house robbery in Ga-Rankuwa. Officers were driving around Klipgat in Mabopane trying to find the car, but were having no luck.

“The tracker officer found the car and drove past the suspects’ hideout. He came to us to discuss how we would approach the situation. He also told us that they were armed and where the house was,” said the officer.

Signs Skipped at More Than 120km/h

Officers went to the house, but the suspects got into their car and fled when they saw police approaching. A high speed chase began with the suspects disregarding the rules of the road and endangering the lives of locals.

“They skipped a stop sign at speeds well over 120km/h. The officer started shooting at the vehicle when he realised they were endangering the lives of others. He never shot at the car when there were members of the public next to them,” said the official.

The chase ended when the driver lost control of the car. At that moment, the officer fired about four shots, hitting the rear tire in a bid to stop them from driving off. A man in a white t-shirt jumped out and ran into a nearby house.

The driver was arrested and more officers arrived at the scene. The suspect was taken back to the hideout and police found the wanted car along with a metro police uniform, multiple stolen cellphones, three stolen ID books, two stolen drivers licenses, three stolen car keys and a box containing equipment used to break into cars.

The source said it was unfair to criticize the officer without fully understanding how everything started. He added that the public had concluded and crucified the officer while having seen only half of the video.