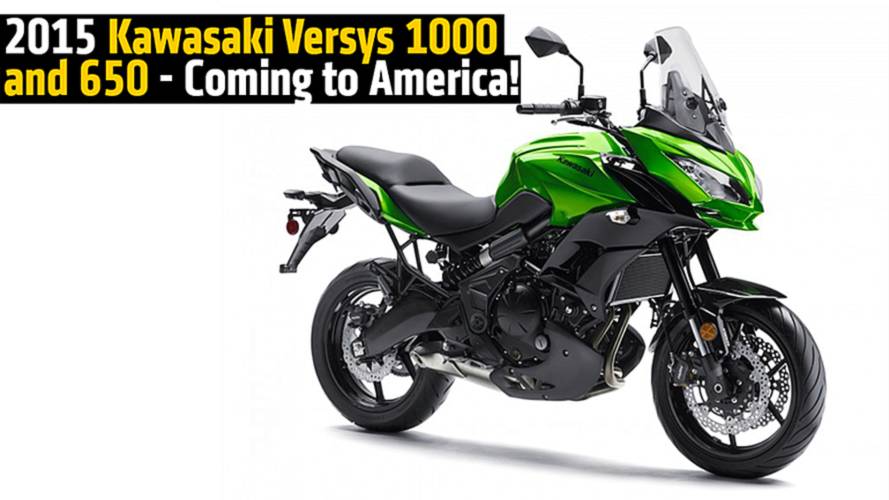 When we detailed the Versys 650 and 1000 unveiling at Intermot one thing was left hanging: was the Versys 1000 coming to the US? Yes it is! And along with it comes the newly redesigned Versys 650. Kawasaki now offers a one-two punch in the Street Touring market.

The 650 will be available in two packages: the Versys 650 ABS and LT. The LT includes KQR™ (Kawasaki Quick Release) hard saddlebags and hand guards. Slotting into what Kawasaki calls the Street Adventure segment, built for backroad, commuting and light touring duties, the 650 ABS and LT have the potential to be great traveling companions.

Foot pegs drop 15mm and move forward 20mm, giving the rider improved leg room and a more mid mount control. Kawasaki designed a tapered seat with a wide flat rear section for comfort and a narrower tapered front to assist in shorter riders reaching the ground. These seats are nice for shorter riders, but unfortunately there's no traditional seat available. The tapered seats tend to slide the rider towards the tank and offer less comfort for taller riders. This is a compromise that can be easily fixed via aftermarket, and doesn't deter us from our excitement.

Additional functional features include a redesigned rear subframe to carry more payload and to fit the KQR™ luggage. When Kawasaki redesigned the front, they were able to add a screen that features tool-less adjustability that is twice as large as last year's screen. New suspension, LED dash, more power, fuel economy, and brakes make for a lot of changes to what was already a good motorcycle.

Kawasaki's Versys 1000 arrives in the US with a brand new motor, updated styling, and that same KQR™ luggage system that's on the Versys 650. Kawasaki is playing straight with the buying public, calling the Versys a Street Tourer with an upright seating position and huge versatility: a comfortable riding position, excellent handling, long travel suspension that can soak up bumps and yet still handle switchbacks and sweepers.

We really hope this bike does well. Fans have clamored for the Versys 1000 to come to the US. From what we can tell, the Versys 1000 is a really well thought out motorcycle that may be ideal for eating miles and providing a fast-paced yet comfortable ride while doing it. We'll know for sure once we take a test ride.

As you read this we will be attending the official US launch. What questions do you have for Kawasaki? What else would you like to know about the Versys?