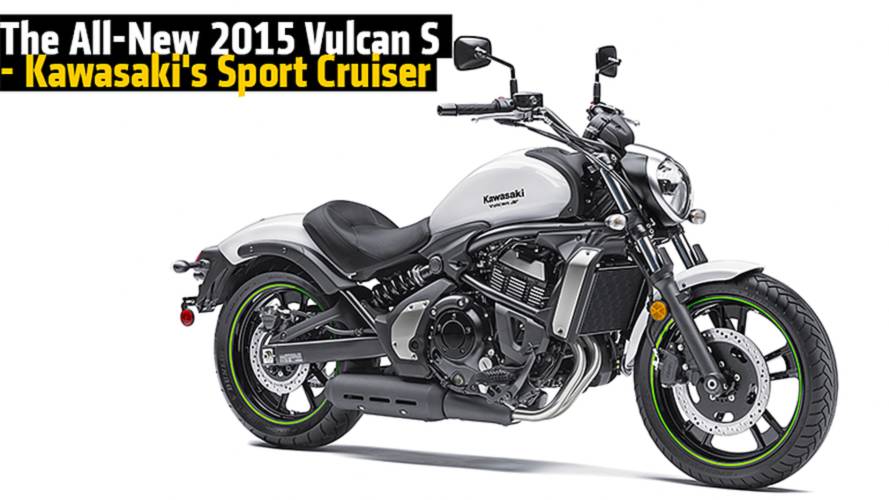 We check out the all new 2015 Vulcan S and review Kawasaki's Sport Cruiser's specs.

This morning we posted a short list of our favorite cruisers for beginners, but ask us again in January, 2015 and we might include the all-new Vulcan S when it hits dealers’ floors. The newly introduced 2015 Vulcan S has the potential to be the best starter cruiser on the market.

Squeezing in nicely between the Harley-Davidson Street 500/750, Yamaha Bolt, and the Indian Scout (in everything but power and price), its timely introduction is hitting a hot spot in the market right now: fun, small performance cruisers.

The Vulcan S’s parallel twin is the same you’d find in the Ninja 650, but with different cams, intake and exhaust. This targeted the sweet-spot of power delivery lower into the rpm range, ultimately producing more torque. We’d guess to see torque numbers around 55 ft-lbs and 55-60 hp...at least we hope.

It also uses the same 6-speed as the Ninja, but with a heavier flywheel to make for less abrasive, jerky starts on the clutch. It should be a more mild, easier to ride bike than the Ninja (not that the Ninja was all that hard to ride anyway).

The 650 has a few performance features that cruiser guys might not be used to, like a 180-degree crankshaft-driven balancer shaft that minimizes vibration and pulls double-duty as the water pump drive. It also has oil-squirters - yes, like you’d find on a Corvette - that cool down the pistons. Like many of the others in its class, the Vulcan S is water-cooled.

Trust Me It’ll Fit You - Ergo-Fit™

In our Indian Scout review, some commenters slammed us when we said a good bike should fit you as soon as you throw your leg over it. The cool thing about the Vulcan S is it’ll fit you. Kawasaki offers three different seat, handlebar and peg options. There’s a little over three inches total difference from the smallest to biggest. It sounds small, but we felt a big difference when we sat on all three bikes.

Most dealers will let you try out the three different variations (while eating porridge). Indian offers a similar package deal with varying sized forward controls and handlebars, but the Vulcan S can be set up for free. The pegs are adjustable, but require a shift linkage; the handlebars are replaced, not just the risers; and the seat of course is totally different.

Not only has the Vulcan S taken the Ninja engine, but the chassis has also taken many cues from sportbikes, like the trellis frame with no downtube, using the engine as a structural part of the bike (I believe the only one in its class to do that) and single-center-mounted shock with a D-shaped swing arm.

If you notice, that rear shock is inside the frame and the exhaust is routed underneath the bike. “Everything was done to inspire confidence in a new rider,” said Greg Emmerson, a Kawasaki representative. “You don't want to turn off a new rider with intake and exhaust sitting out and into your legs. This way you can more easily plant your feet flat on the ground.”

The bike has a very low center of gravity and luckily a very high lean angle. “The idea is to take this bike to a wider range of people. We're not directly targeting the hardcore rider even though they will love it,” said Emmerson.

Will this bike finally kick the Harley-only crowd into believing in other brand cruisers? The lightest in its class and mid-range, it’ll give any small cruiser a run for its money.

Sitting on the bike it’s immediately apparent on how small, light and nimble it is. It has very similar ergonomics to the Indian Scout, but the Scout is a better looking bike and far more powerful, while also being far more expensive, $10,999.

One major draw back is the cheap looking front-end. It would have been nice to see more sportbike influences, but Kawasaki decided to stop when they got to the front shocks leaving a mid-sized 41mm front forks that don’t inspire big confidence in performance.

I don’t view this bike is a typical cruiser. I’ve normally written-off Vulcans as cheap (in the bad way) knock-offs with no unique or outstanding quality... until now. This bike isn’t for the stereotypical slow-moving, hogging-the-road-on-their Hogs crowd. It’s a light weight, probably well-handling fun little bike that we hope can be ridden hard. Check back early next year and we’ll ride the heck out of it and let you know if it’s everything we hope it’ll be.

The 2015 Vulcan S will be available in three distinctive colors, including Candy Lime Green as well as Pearl Crystal White and Flat Ebony.

Over 3 inches of rear travel