Do We Really Need Umbrella Girls? 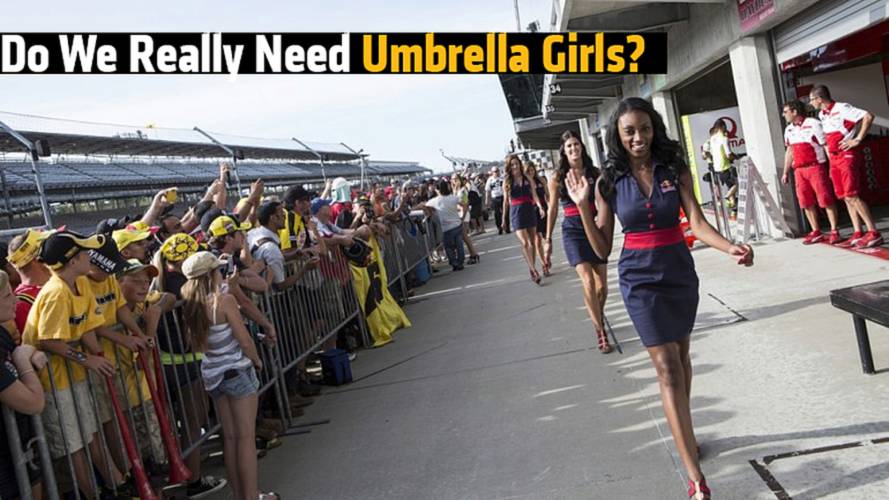 Should Umbrella Girls be a thing of the past?

Building a racing motorcycle is an exercise in minimalism. If you start with a street bike, the first thing you do is get rid of everything not needed to go fast. You strip (and sell, if you're lucky) lights, kickstand, safety switches, keyed ignition and street bodywork. The things you put back in their place are stronger, lighter, easier to work with and more functional.

Putting together a motorcycle racing program is no different. Budgets are tight, so everything and everyone has to pull their weight. The guy who drives your team hauler may also be the guy who cleans and installs your fairings. Your data person might also be the team cook. If there are fifteen roles to fill in a motorcycle race team, expect that they'll all be covered with ten people. Or less. Working for a salary that, if computed at an hourly rate, might not meet the minimum wage requirements in Bolivia.

READ MORE: Why MotoGP is Formula One on Two Wheels

You see these realities in full effect, walking through the race paddock on a Saturday afternoon. Everybody is hustling, often jogging from one task to another, working their tails off to get the job done. Conversations are friendly but short, as nobody has time for extraneous pleasantries once the weekend is in full swing.

Then on Sunday, in the midst of all this serious business and polished efficiency, appears an element of frivolity in such sharp contrast to the prevailing environment that people literally stop in their tracks to take notice. Bands of girls in groups of two to twenty, impossibly tall, achingly beautiful and clothed in such a way that would see them banned from certain airline flights, stride into the pits with smiles as bright as the sponsor logos plastered all over their outfits.

They're a tradition as old as yours truly and as familiar to the race fan as their favorite rider. Sunscreen maker Hawaiian Tropic is credited with starting the trend, having brought a troupe of bikini-clad girls to the 24 Hours of Le Mans in 1983. At most races the girls you see are professional models hired by agencies, sponsors, or sometimes the teams themselves to accompany the event. Their purpose, in theory, is to represent the brands emblazoned on their minimal clothing.

As the paddock is an overwhelmingly male environment, you aren't likely to find much complaint about several dozen attractive women, wearing costumes that sometimes leave very little to the imagination, striding through the pits on a Sunday afternoon. For that matter, I can't say you'll find me looking away out of some sense of propriety. But as motorcycle racing, along with the industry as a whole, struggles for growth and legitimacy in an increasingly competitive and egalitarian world, are grid girls really necessary? Do they do more good than harm?

The largest sales growth opportunity for motorcycle and accessory manufacturers is female riders. Some small efforts, in terms of motorcycle design and style, have been made over the past decade to recognize this, most recently with Yamaha's launch video for the new R3. But what message does it send to a prospective female rider, attending a race weekend, product expo or bike show, when there are no female riders present, but dozens of umbrella girls who have nothing to do with the sport but standing by and looking pretty? Are manufacturers and sponsors, and sanctioning bodies for that matter, convinced that the best way to attract half of their prospective customers is to present them as objects of sexual attraction?

Of course, some women simply ignore this objectification and go about the business of riding and racing. Accomplished racers like Melissa Paris, Nichole Mees, and Elena Myers are quietly and professionally going about their business in what has been a male dominated sport, distractions and stereotypes be damned.

"Its probably not the best way to market whatever product it might be towards women," said Paris, "but it definitely gets attention. It doesn't make me uncomfortable really, because I'm of the mind that if a girl wants to sign up for that gig that then that's really her business... We are both there for our different jobs. I'm comfortable with being judged for what I'm doing on the track more than I would be for standing around in Lycra."

There's no denying that grid girls are effective marketing. But if the intent of sponsors, race organizers and manufacturers is to grow the sport, maybe a lot more money and attention should be directed toward the women wearing the leathers and helmets, instead of the ones in the halter tops and miniskirts.

Throughout the Western world we find ourselves in an age of endless options for distraction and entertainment. Far from the strident protests for womens' equality in the 60s and 70s, young women today are more likely to simply ignore environments in which they are not welcomed or appreciated. The womens' empowerment movement has transitioned in narrative from "anything you can do, I can do better," to "do what you want, and don't let anybody tell you otherwise." For women, that brings a new level of liberation. For the motorcycling industry, that spells a potential catastrophe of missed opportunity. Women don't have to ride motorcycles, or attend races, or read motorcycle magazines and websites. If they feel excluded for any reason, many of them will just go do something else.

Motorcycle manufacturers, race teams and organizers can't afford that. Sponsors can't either if they intend to market their products and services to both sexes. Marketing dollars are closely shepherded by large companies, which makes the expenditure on bikini models raise an eyebrow yet further. Maybe it's time that motorcycle industry leaders and sponsors begin to treat their budgets as the race teams treat their bikes, and get rid of things that aren't necessary for performance, and may even be holding them back.