Cheaper to Keep Her: Why You Should Hold On to Your Old Bike 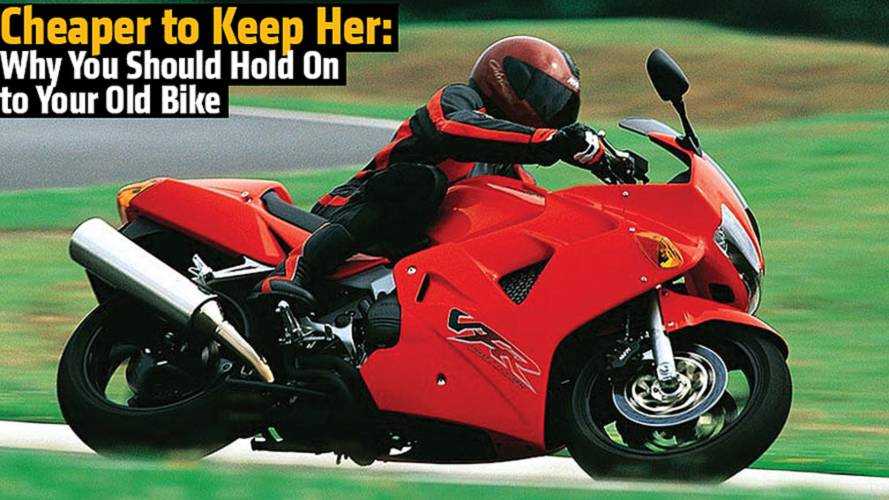 Feeling the temptation to get rid of your old bike in favor of something shiny and new? Here are ten reasons you should think twice before you do!

This time of year is Christmas for the motorcycling faithful. Product expos, new bike reveals, and updates of our favorite models pepper the senses with every manner of two-wheeled temptation. Year after year, everything gets faster, lighter, sleeker, even safer. If you read this website, chances are you've spent more than a little time over the past few weeks transfixed by Kawasaki's new H2, Ducati's new Scrambler, and wondering what Yamaha has up their sleeve with the new R1, scheduled to debut in a couple weeks.

And then you shut your laptop and walk out to the garage, helmet in hand, and behold your old pile. Ugh. It's a motorcycle, alright, and you love it, but it's just not as shiny as it used to be. Maybe the fairings are a little sandblasted from ripping down the highway on your commute. Maybe there's a scuff or two from an absentminded tip-over in the driveway. Maybe it just looks a little dated.

So you start to wonder, is it time for a new bike?

Well hold on there, little fella. Here are the top 10 reasons you should keep love alive with your trusty machine!

You know that bike inside and out

You know every screw, clip, bolt, switch and wire, stem to stern. You've had a tool on most of them, by now. You know what's been wrong with it, what small idiosyncrasies to look out for, and the things you've already fixed. Getting another bike, even a brand new one, means learning all that stuff over again, when you'd rather just be out riding.

An older bike can be a thing of beauty. (Photo via www.vintagehondacb.com)

The seat is broken in to the particular shape of your hindquarters, you've got the controls set up just the way you like them, and it all just feels right, every time you throw a leg over. Maybe you've even had the suspension massaged to suit your body weight and riding style. Getting a new bike is going to be a lot like wearing somebody else's boots, at least for awhile. Why go to the trouble?

You'd lose your ass if you sold it

Let's face it, you've dumped a whole lot of money into that thing. Brake lines, gearing conversions, levers and rearsets, exhaust systems, everything. When your baby was new, nothing was too expensive or too good for her. But you think the guy off Craigslist is going to care about the hours you spent researching the perfect hand grips? Not a chance. All he sees is a bike with more years and miles than the last one he looked at, and he's going to low ball you. And so is the next guy. And eventually, you're going to take an offer that's insulting compared to what you wanted to get, and heartbreaking compared to what you've got in the bike.

There are, however, old bikes that should be put out to pasture.

You're probably not getting everything you could out of it. When's the last time you really used your bike for all that it was worth? Have you ever taken your sport bike to the track, or your dual sport on an extended trip sans-pavement, or done some actual touring on your sport-tourer? It's hard not to love a bike when it's in its element, so maybe your wandering eyes can be fixed by getting out and doing what your bike was meant to do in the first place.

You don't have the cash to pay for a new one up front. Getting a loan for a motorcycle can be easy, but it's also a little dumb. For most of us, a motorcycle is a recreational vehicle; an optional form of transport. Owing a large amount of money on a toy isn't a sound financial policy, even if we've all done it. Does that put some of the latest European imports a bit out of reach? Sure, but maybe it should.

A little refresh work will make it just like new again. Chagrined that your bike just doesn't make the power of the newer model? Then give it a little love! Swap out that slip-on for a full exhaust system, have it tuned by a professional on a dyno, maybe even send the motor out for a little mild work. Change the spark plugs, have your injectors cleaned, adjust your valves. You might be surprised, after doing all or some of that in the offseason, to find that the performance gap between your bike and a brand new one isn't so large as you thought.

Listen to Your Friends

Your friends got rid of their old bikes, and they all regret it. How many times have you heard your buddy Jimbo say "man, I miss that bike," and then hang his head in sadness. Don't want to feel that way? Then don't sell yours! Have you ever heard somebody say "I wish I'd gotten rid of that bike?" I didn't think so.

All the new bikes are overly complicated. You bought a motorcycle for the simple, visceral joy of it. You don't need digital throttles, fuel injection modes, traction control and all the rest of those gizmos. You just want to ride the thing, the way riders have been doing it for a hundred years. You want to be connected by a steel cable to a screaming motor between your legs, without a bunch of electronics barging in and fouling up the relationship.

Come on - would you break up with your old Ducati? Yeah, we didn't think so.

Feel better now? Good. Now get on that old bike, settle into that familiar riding position, and go fall in love all over again on your favorite road or trail. And with the money you saved not buying a new bike, maybe take the two of you out for a nice dinner.