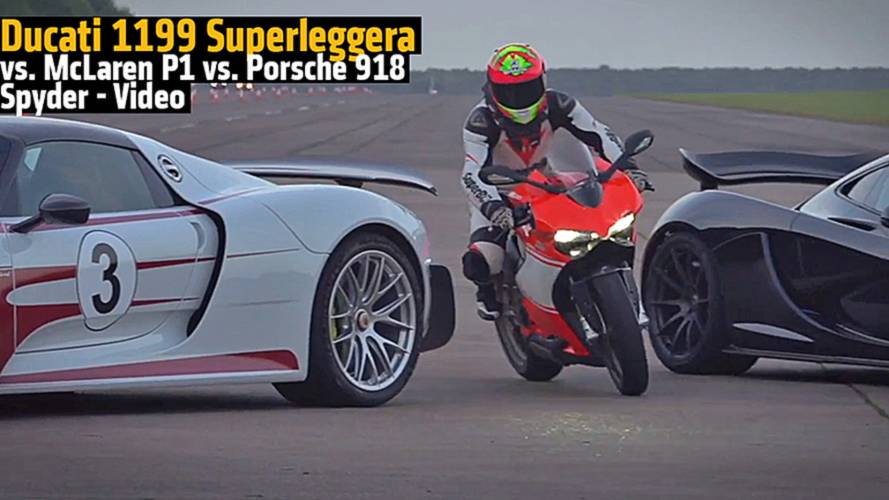 Autocar pitted two hypercars – the McLaren P1 and Porsche 918 Spyder – against a motorcycle that is just as exclusive and powerful as the four-wheeled monsters – the Ducati 1199 Superleggera.

Some automotive enthusiasts may say, well the Ferrari LaFerrari should’ve been there to uphold Italy’s honor. To which I'd say, yeah, but the Ducati is red and Italian too. So, it’s pretty much the same thing. Plus, Autocar states that Ferrari declined the invitation for various reasons, which is something that Ferrari is known to do.

READ MORE: Cheaper to Keep Her: Why You Should Hold On to Your Old Bike

Regardless of what factory production vehicles the 1199 Superleggera’s races against, it can hold its own.

Ducati claims the Superleggera’s 1198cc V-twin motor pushes the verge of 200 hp – with another 5 hp readily available from the racing kit – and around 90 lb-ft of torque. That’s an enormous amount of power to push around a scant weight of 390 pounds (curb weight). (I mean, it's no H2 power, but it'll do, hehe)

The Superleggera’s feather-light weight – one of the lightest production liter-plus sportbikes ever produced to be exact – can be attributed to its carbon-fiber subframe and bodywork, magnesium monocoque frame, and forged magnesium wheels. Ducati even worried about titanium fasteners and lightweight lithium-ion battery, to save pounds.

With all of this, and a host of other go-fast goodies, the Ducati puts up a good fight against the 900 hp-machines while costing a fraction of the price.

Watch the video and relish in the fact that you can get the same exclusivity, power and looks as the multi-million dollar cars for much less.