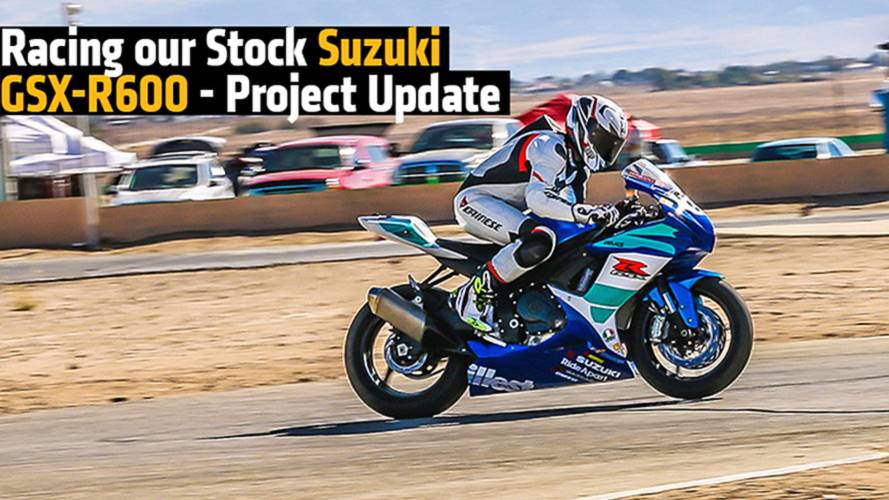 We take our project Suzuki GSX-R600 to the racetrack.

Attempting to hang with highly-modified purpose-built race machines was no easy task, but the bare-bones Suzuki held its own in one of our first races with the RideApart Suzuki GSX-R600 project bike.

After extensively road testing our 2014 Suzuki GSX-R600 project bike on the street, it was time to see how competitive the machine truly was right out of the box. Everything down to the chain guard, stock exhaust system and factory warning stickers were left untouched as we prepared the bike to race.

and replaced with water and a track-legal coolant additive for previous track day testing.

The bike was also outfitted with race bodywork, including a sealed belly pan which we purchased from Hotbodies Racing. Fatlace / Illest graciously lent their design and graphics production expertise to help produce the livery.

After laying down a few coats of paint on the primered Hotbodies bodywork to match the Suzuki blue gas tank, custom-printed vinyl decals were applied, including the race-legal numbers and backgrounds. Once the stock fairings, headlight, taillight and mirrors were removed from the bike, the precisely-calibrated eyeballing method was utilized to line up the mounting points of the new bodywork and drill out the holes. At the end of the install process, Fatlace / Illest had produced an aesthetically stunning race bike on their first shot at a motorcycle job.

The first day of practice at the Streets of Willow Springs race track in Rosamond, CA, mainly consisted of dialing in the stock suspension. These settings were pretty close to our ideal set up due to our tuning up at Sonoma Raceway a couple months prior.

The Streets of Willow is a much tighter and more technical track than Sonoma, with rougher track surfaces making suspension settings even more critical. The front end didn’t have enough feel for this environment, so the compression clickers on top of the Showa Big Piston forks were kicked up a few notches.

The rear end required a bit more wrestling. The rear shock unit seemed to perform very well and reacted noticeably to each adjustment, but it was tough for us to find the sweet spot. At first the rear would lose traction under leaned, hard acceleration on certain corner exits. However, after compensating for this by softening up the shock, the rear would squat too much and loaf around on the same exits. We fought this back-and-forth battle all day as well as in qualifying Sunday morning but weren’t able to get the perfect combo.

Power was one department in which the stock GSXR-600 didn't lack as much as anticipated. We expected the field of fully-built race bikes (some of which were from AMA teams, with roughly 20 more horsepower) to pull on us down the straights and drive out of corners. Though it was definitely apparent that these bikes had a pony advantage, the gaps placed on us in these sections of the track were not as large as we feared.

front brakes allowed high closing speeds and deep braking into the corners off the long straight stretches, despite the brake fade that would surface at the very end of a hard braking stint.

GP-A Pro DOT race tires in medium compound were wrapped around the wheels with 19/29 cold pressure settings. The summation of these strong points on the GSX-R600 gave the bare-bones Suzuki a fighting chance when up against the true race breeds.

When the green flag dropped on race day, the GSX-R600 launched extremely well for the start of the Expert 600cc Superstock class race. Floating the RPM’s around 9,000 channeled the midrange grunt right to the ground putting us in 2nd off the holeshot. We were able to hold our 2nd place position with the AMA-seasoned leader pulling further and further away until a red flag stopped the race on lap 3.

Our launch on the second go-around for the restart was less impressive pushing us back to 4th place. We were able to maintain this 4th position through the checker due to the strong midrange power, but the squatting and wallowing rear end and lack of top end punch made it tough to catch the final podium spot.

Overall, we were very happy with how the bike performed given its near-showroom condition. The whiz of the brakes binding on the discs was all that was heard as the stock Suzuki GSX-R600 passed the grandstands, down the main straight and entering turn 1; it was almost as if the bike belonged in the Formula Electric class. Though plenty audible through earplugs from the cockpit, the exhaust note emitting from the factory muffler was nearly nonexistent to bystanders and fellow riders.

Proving the competitiveness of the bone-stock GSX-R600 was a lot of fun and very interesting, but we couldn’t help but imagine what some performance add-ons might unlock…Perhaps the final round of the Moto West Grand Prix 2014 race season next month at Willow Springs’ main track will address this curiosity.

On Sunday night, the bike was hauled back to our offices in the city where it was stripped and redressed for the street, just in time for the weekly commute. This was a relatively painless job that only took a couple of hours once familiar with the proper assembly method of the stock bodywork and location of all of the fasteners. However, there’s something about safety wired brake caliper bolts rushing through the wind down the 405 freeway that reminds you of the fact that the bike you are aboard is out of its natural environment.