The On Any Sunday KTM Build 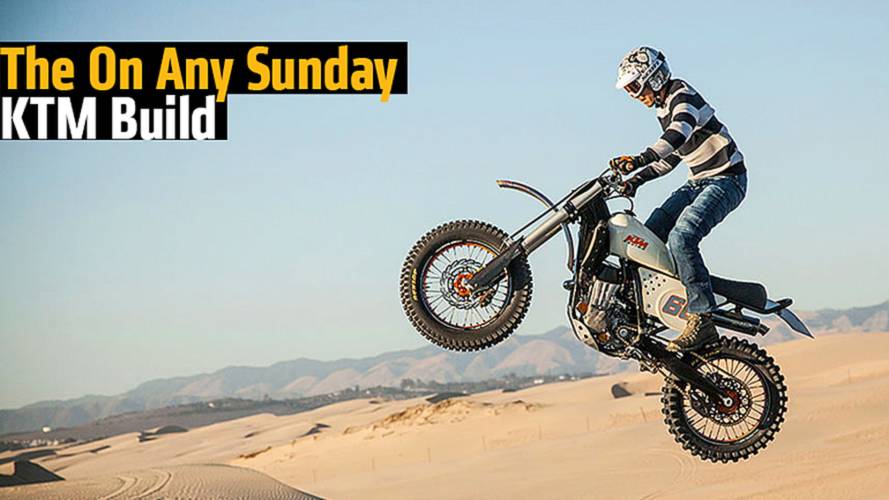 The sun’s setting and the water is kissing the white-sand beach. Slowing coming into focus are three custom scrambler-style bikes, splashing through the shallow waves, wheelie-ing around each other and bouncing off sand dunes.You can almost hear the music playing, “on any Sunday stretching up, reaching high... leaving my Monday world behind... I fire my rockets and explode in the sky... kick up my heels until I find, I'm flyin'...”

The On Any Sunday KTM

This time, however, it isn’t Mert and Steve, but rather Roland Sands and friends on the Roland Sands Designs’ latest build, a custom 2015 KTM 450 SX-F. Built to promote the movie On Any Sunday, The Next Chapter, the bike will be auctioned off for the Kurt Caselli Foundation.

READ MORE: Will it Work? On Any Sunday, The Next Chapter | RideApart

We’d been bugging Roland for sneak peaks of the bike as we’d seen it in pieces during a recent shop tour, but haven't been allowed to show you any photos of the bike until now.

First, the guys started with a bone-stock KTM 450 and a Triumph from Roland’s collection of vintage bikes. The Triumph was an original scrambler/hill-climb/flat track bike built in the late ‘60s and had miraculously remained untouched. Roland picked it up without restoring it.

They used that bike as inspiration for the KTM build, which came out beautifully. Luckily the RSD crew are racers at heart so they retained the spirit of the high-performing KTM. Starting with a hand-formed aluminum tank and hand-built chromoly-steel sub frame, they fitted 1974 Husqvarna reproduction sheet metal on the KTM. The frame remained stock.

The guys also included some parts they believed Kurt would have wanted if this was his bike, like his preferred handlebar bend, grips, pegs and wheels, as well as a custom, thinned-out brake lever from Kurt’s long time factory KTM mechanic, Anthony Di Basilio.

“We think this bike would be set up just how Kurt would have liked it. All of the custom made parts, combined with the modern day aftermarket accessories, almost makes you wonder what year this machine is actually from,” according to an RSD press release.

Why It Was Built

Yes, the bike was built as a promotional tool, because of course you’re reading a story about it that simultaneously covers the movie, but more importantly it was built in honor of AMA National Hare & Hound Overall Champion, 3-time WORCS winner, 8-time ISDE Top American, and Dakar Rally stage winner, Kurt Caselli, who died at the 2013 Baja 1000.

A friend of Roland Sands and crew, Kurt had apparently talked about building a custom KTM with Roland, but never had the chance.

Since his death, family and friends started the Kurt Caselli Foundation in hopes we’d never lose a rider again. The foundation supports riders before, during and after the races, to ensure the best safety for riders.

How to Buy It

The bike is currently up for online auction with proceeds going to the Kurt Caselli Foundation.

On Any Sunday, The Next Chapter premieres TONIGHT and we’re invited. Stay posted for an interview with Bruce Brown and Dana Brown.

The online auction bidding for the bike starts today and ends on November 29th, with a live auction at A Day In The Dirt. For more details or to start bidding please head over to Compass Auctions and be part of history.