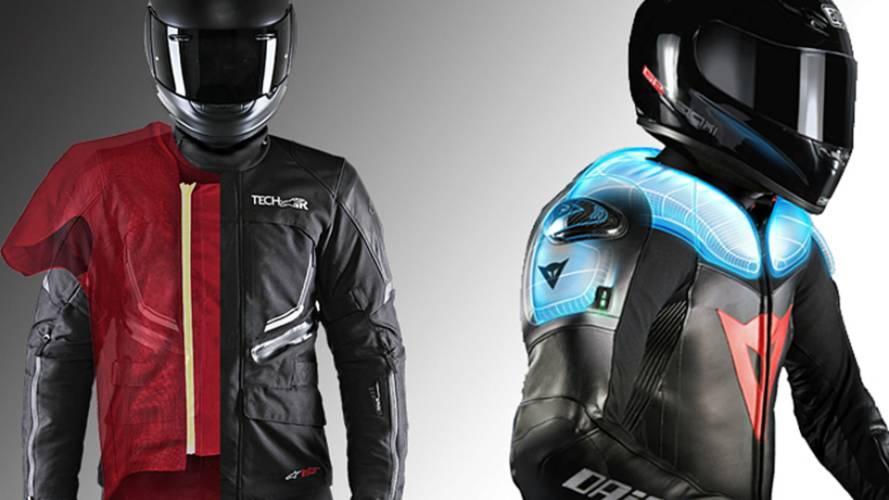 Airbag Safety 2016: Dainese v. AlpineStars. Who will corner the market on your enhanced protection?

There is a lawsuit in the motorcycle world that is akin to the rumble between Apple and Samsung. Like the two technology behemoths, the lawsuit is between two of the largest motorcycle apparel manufactures—Dainese and Alpinestars. It centers around a violation of patent law regarding components in personal airbag systems for motorcyclists.

There is no denying that Dainese has always been an innovator regarding motorcycle safety. They were the first to incorporate back protectors into road racing suits in the 70's, and most recently they conceived and patented technology that enabled the incorporation of airbags into jackets and race suits in 1995. In 2000, the company began active testing of the D-Air system for use in competition automotive, snow, ski, and motorsports. Recently, the D-Air has been made available to consumers.

In early 2014, Alpinestars announced their jump into the airbag safety space by introducing the Tech-Air Street Air Bag System to consumers, a technology they claim to have been developing and testing since 2001. The AlpineStars Tech-Air system is fully self-contained and relies solely on sensors for deployment in the event of a crash or unscheduled dismount. In contrast, the Dainese D-Air system requires technology support mounted to the motorcycle that communicates the deployment of the system. However, this facet is not the focus of this lawsuit.

Dainese offered a formal response on December 22, 2015, to set the record straight. They levied two injunctions against Alpinestars in a German court stating that the Tech-Air systems infringe upon two of the Dainese European patents, specifically the construction of the airbag itself and and the physical material piece that dictates or controls the inflation from the gas system. Dainese has also brought on an additional lawsuit seeking damages and to halt the commercialization and sale of the Tech-Air system in Germany.

AlpineStars has said that they will not cease selling their Tech-Air system.

We reached out to both Dainese and Alpinestars for additional comment, but both companies are sticking to their guns and referring us back to what they have put out in their press releases. We have included both recent releases below.

Whoever comes out on top of this matter, it is sure to make waves in the motorcycle industry. Sole ownership over air bag technology is not likely to remain the sole possession of one company. However, one thing is certain: Motorcyclists now have a technology that will keep them safer in a crash. That’s a positive no matter what.

Until we have more information, this is a focused suit on small component technology. I think Dainese has a lot of history to stand on regarding this technology, but when it comes to legal fights, who knows what the courts will decide.

What do you think of all of this? Sound off below in the comments section.

(TORRANCE, CA. - December 24, 2015) - With reference to recent articles published about Alpinestars and Dainese being in dispute over airbag technology, Alpinestars is issuing the following statement to clarify the current situation: Alpinestars has been subjected to an allegation of patent infringement by Dainese on a specific part of its airbag construction used in the Tech-Air Street system.

The Alpinestars’ Tech-Air Street system was launched in November 2014 as the world’s first self-contained street airbag system that independently functions without the need for sensors to be installed on the bike and the subsequent need to link a specific motorcycle to the airbag system used by the rider.

The allegations made by Dainese S.p.A in proceedings launched in Italy against Alpinestars, refer to the assembly of the bag itself, the physical material piece that contains the gas in an inflation and not with any reference to any other parts or Alpinestars’ Tech-Air street system’s use of an algorithm for registering when the airbag deployment should occur.

Dainese instead make claims that the physical construction of the bag in the Tech-Air system infringes upon Dainese's patents.

In Germany, Dainese did make a direct request to certain retailers, that they cease and desist from offering for sale the Alpinestars Tech-Air Street system, however, no legal action has been taken against Alpinestars and neither has Alpinestars withdrawn any of its products from the German market.

All claims made by Dainese against Alpinestars and/or its retailers are disputed and Alpinestars is taking the appropriate legal measures to ensure that any such unfounded allegations will not prevent distribution and sales of the Tech-Air Street system.

Alpinestars continues to distribute Tech-Air technology for the benefit of all motorcyclists throughout Europe and the rest of the world and trusts that the allegations made will be proven to have no basis through appropriate legal jurisdiction.

Statement Regarding Dainese Lawsuits Against Alpinestars

VICENZA, Ialy (Dec. 29, 2015) – With respect to Alpinestars’ “Statement regarding press coverage of Patent Challenge,” and for the sake of clarity, Dainese deems it necessary to reply to the following claim:

“In Germany, Dainese did make a direct request to certain retailers, that they cease and desist from offering for sale the Alpinestars Tech-Air Street system, however, no legal action has been taken against Alpinestars.”

At this time, Dainese will not comment further on the merit of those lawsuits, instead preferring to discuss them in the appropriate venues.

Advocating and delivering safety to people exposed to traumatic injuries in dynamic sports has been the mission of Dainese since Lino Dainese founded the company in 1972. From the very first day, Dainese has been the innovator for protection in active sports, with major industry firsts including the back protector for motorcycle riding, skiing, mountain biking and equestrian use, as well as the D-air® airbag system, which Mr. Dainese conceived in 1995.

Thanks to Nick Jaquez at Scrambler Forums for tipping us off to this story!