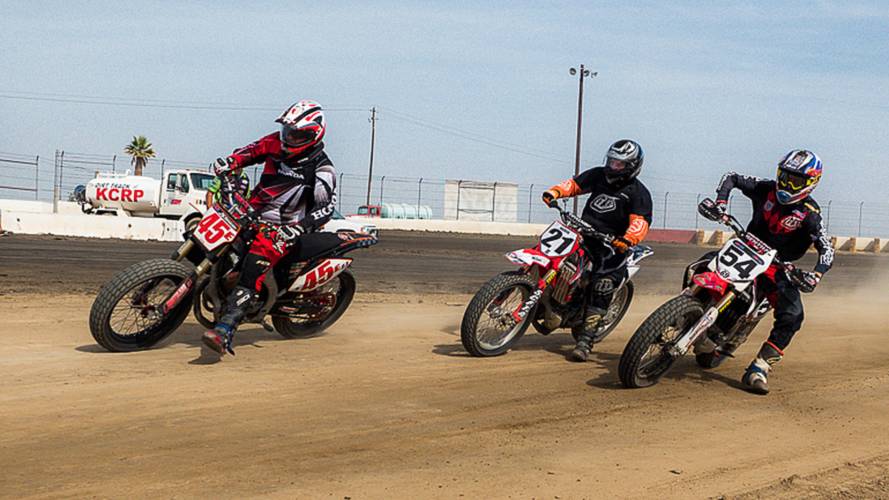 Whether you’re a new or seasoned rider on street or dirt, Brian Bartlow’s Feel Like a Pro flat track school is a great way to hone your skills.

Whether you’re a new or seasoned rider on street or dirt, Brian Bartlow’s Feel Like a Pro Dirt school is a great way to hone your skills. You wouldn’t know it from his humble attitude, but Bartlow has over 20 years of road racing experience, 162 race wins, and many championships under his belt, giving him a solid base of experience from which to instruct. The school I attended was at Kern County Raceway Park during the I-5 Bike Fest. The school also provided instruction from guest coach and active pro AMA racer Mikey Rush.

Like many schools, Feel Like A Pro Dirt allows you to bring your own bike or use one of their 2013 Kawasaki KLX140s, along with most any gear you may require. As a complete newbie to the dirt, the only gear I wore that were my own were my SIDI MAG-1s, since boots can be tricky to fit. They had helmets from extra small up, and everything from kid’s gear to large adult sizes, ensuring something would fit.

A word of advice? Bring goggles, unless you want to spend the day flushing your eyes with solution or treating your disposable contacts as very expensive tear-offs for your eyes. Even if you’re at the front of your pack, eventually you’ll lap someone or spend time spectating, and that’s when the dust and dirt will catch up to you.

The class began early, and everyone was advised to arrive no later than 7:30 AM. Most were already geared up and ready to go as Bartlow introduced himself and Mikey, then had each participant give a brief self-introduction. He stressed that pro or no, we’d all be learning from each other throughout the day, so understanding everyone’s riding background and goals was key. Based on discrepancies in experience, we were split into two groups: beginners on the school bikes, and everyone else who had brought their own.

While the latter warmed up on the inner dirt track, Brian pulled the other relative newbie and me aside to a patch of dirt between the clay tracks where he marked a small, improvised oval and had us get a feel for the way the bikes handled. Here he went over how dirt differed from street, covering body positioning, manipulation of the handlebars, and how speed helps cope with different surfaces. He also let us know that we could pass each other (given enough space), which made it even more fun once we started to get the hang of it.

After a few rounds of running miniature laps in both directions, stopping for corrections from Brian, and trying again, I pulled up to him and asked if I should more or less treat a flat track as “opposite day” in relation to everything I had learned about street riding. He nodded, gave me a thumbs up, and pushed me to ride faster, encouraging more “oops” moments where I ran wide and had to run through clumps of mud and clay, or felt the back end go squirrelly in a sand drift.

It was a great way to learn how the throttle can be your friend in those slippery moments; cutting it meant dumping the bike, while gassing it led to victory (or at least some sense of predictability and stability). In that exercise alone, I went from sliding eliciting an “Oh shit!” reaction to having me grinning ear to ear and not minding the dirt collecting between my teeth.

Soon after, we joined the other group on the proper dirt oval and got more practice sliding our foot along the inside of the turn while running laps at higher speeds. At that point, both Brian and Mikey had their eyes on us. They took turns coaching from both the side of the track and on the track, riding one of the school bikes to show us better places to chop the throttle and turn in, get on the gas, and other tweaks to our technique. Sometimes they would ride alongside and push us to go just a little faster, or motion to let us know we weren’t getting our outside elbow up high enough. Having someone on track to coach through the turns was really helpful, since it can be difficult to look to the sidelines for assistance when you’re sliding and trying to sight your exit.

After the tiny dirt oval, the actual track felt easy in spite of a couple bumpy patches near the exit at one end. There was so much more space and the turns were bigger, which encouraged us to be more liberal with our throttle inputs. Taking turns and sharing the track with the more experienced group gave us time to chat and learn from their observations and experience, which was great! Sometimes they’d spot something they used to do in our riding, sparing us a mistake through some personal anecdote. By the time we took a break for lunch, I wasn’t touching my brakes at all which felt like a major accomplishment for someone who hadn’t ridden dirt before.

Returning from lunch brought more excitement. For the more experienced group, it meant a few rounds on the clay track to see if they wanted to get in more practice on it, since some of them were racing later that evening. We neophytes didn’t get to ride the clay, but I was fine with that. Brian and Mikey told us the clay was more tacky, and I was getting addicted to sliding.

After that, everyone lined up and took turns practicing race starts. Talk about an eye-opening experience! I never really understood race starts before, but man is it exciting when someone explains about where you should keep the RPMs, then lets you play with the clutch to see what works and what sends your back end fishtailing.

Everyone got a chance to practice race starts solo at least a couple times before Brian lined us up and had us starting simultaneously. Groups were still split by skill level, but Mikey Rush gridded up with everyone and added a bit of push to mock race laps. I’d be lying if I said it wasn’t fun trying to get the hole shot and beat my classmate through the first turn, then see how much of a gap I could make through the second one. More than a couple times, I got on the throttle a little too early on the exit, and barely managed to save myself a crash, but it was fun to ride it out knowing medical staff was close at hand.

Easy-going and friendly, Brian made sure everyone remembered to have fun and accept that mistakes were simply learning opportunities. He and Mikey gave plenty of individual instruction and seemed to know intuitively just how much to push each rider and when to rein them in, keeping things fun and productive.

Would I do it again? In a heartbeat. In fact, while I’d love to do flat track school again, the quality of Brian’s instruction has me seriously considering his dirt school in Kelseyville, California where he covers more than just flat track racing.

More information about his different programs is available at the school website: http://feellikeaprodirt.com/. They even seem to have some discount worked out with a local motel, if you don’t feel like making the trek home after a day of training.