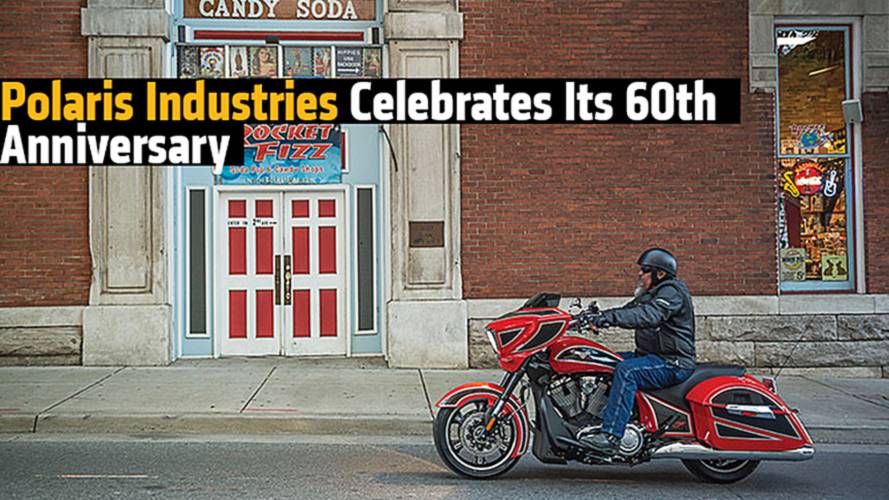 Polaris Industries turned 60 yesterday, and the company celebrated by ringing the closing bell at the New York Stock Exchange.

Polaris Chairman and CEO Scott Wine, along with other company execs, participated in the time-honored ceremony; the brand also showcased a number of its models, including the 2015 Indian Scout and Roadmaster and the company's three-wheeled Slingshot, in a public exhibit outside of the NYSE building.

The company started in 1954 in Roseau, Minnesota. Although it's relatively new to the motorcycle game, they've worked on non-four wheeled vehicles since the company's inception. Polaris is created with producing the first practical snowmobile. The story goes that the original Polaris snowmobile was built by employees as a side project; the company was focused on building farm equipment, but the new machine proved to be a pretty handy means of transportation across Minnesota's snowy plains, and so the company began mass producing them.

In the 1980's, the company began producing four-wheeled ATV's; in 1998, Polaris launched the Victory motorcycle line, making Polaris the first new major American motorcycle manufacturer in 60 years. The Victory brand has had its share of fits and starts; while industry critics (including the staff at RideApart) have been generally positive about Victory bikes, the line has yet to truly compete with the culturally-ingrained behemoth that is Harley-Davison.

And then there's Indian. It's safe to say that the relaunch of the classic American motorcycle brand has been an overwhelmingly positive success for Polaris. According to Forbes magazine, Indian sales resulted in $70 million in Polaris-owned motorcycle brand sales at the end of 2013; the new Scout gives the brand a lower price-point model that may appeal to new riders as well as experienced sport or standard bike riders looking to try out a cruiser.

It'll be interesting to see where Polaris takes its motorcycle business  - with no all-new models from Victory this year (bikes like the Gunner and the Magnum are simply modded versions of existing rides), and with the instant success of Indian, we wonder what direction Victory will take. But with its long history of innovation - and building machines that are flat-out fun to ride, whether on snow, through mud, or over asphalt - we're sure that Polaris will keep making its mark.