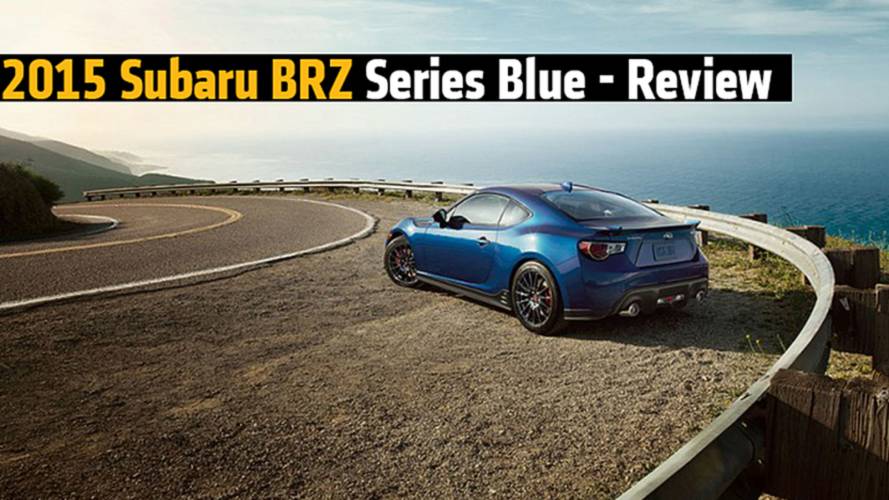 By now you’re well aware of Subaru’s BRZ. It’s a driver’s car priced for the masses, wrapped in a sensuous shell and ready for your next track day. It’s the darling of the automotive media and the subject of millions of stories, so unfortunately for me, any new article is simply a rehash of what’s already been said. But the BRZ is a car made for driving, not writing about, so when someone offers you a new Subaru BRZ Series.Blue for the week, you simply say yes. Just get inside and focus on having fun – worry about the words later.

Subaru’s BRZ Series.Blue is based on the BRZ Limited model and has a production run of just 1,000 units. You could say it’s a package aimed at boosting performance without boosting power, but really, it’s mostly about appearance. Sprucing things up is a flat-black STI-branded aero kit consisting of a front chin spoiler, side panels, and a diffuser in the rear. Underneath the car is a flat undertray, and according to Subaru, these aero pieces work together to help lower the BRZ’s drag coefficient from 0.28 to 0.27Cd.

Adding some performance-inspired style to the outside are red brake calipers and black STI-branded wheels. The suspension has also been revised with smoothness in mind. Inside you’ll find blue seat bolsters on the Alcantara-trimmed sport seats, blue stitching, blue-leather accents on the steering wheel, and a bright red “STI” start button on the center IP. And best of all, you can have any transmission you want as long as it’s a 6-speed manual.

This BRZ Series.Blue also commands a $3,800 premium over the standard BRZ Limited, and to this writer, that seems a bit overpriced. The wheels are fine, but still wrapped in the same Prius-sourced rubber; the body kit appears to be made from textured ABS plastic, and there are a few spots where the side skirts don’t sit flush with the body; and I personally am not one for colored interiors. But since the underlying car is still a BRZ, there is very little to actually complain about.

Yeah, some complain about the motor – it’s a 2.0-liter flat-four with 200 horsepower and a thimbleful of torque. But it’s a powerplant bolted into an excellent, lightweight package. It’s placed down low and far back for optimal weight distribution, and its transmission is geared in such a way that it always seems to extract just the right amount of power at just the right time.

Around town, the BRZ Series.Blue is a lively, engaging drive. Step on the gas and the car buzzes with excitement – it’s quick to respond to your right foot and always feels eager to go. Lay on the throttle, though, and the BRZ responds only with more noise – not speed. A Porsche hunter this isn’t.

Subaru’s BRZ Series.Blue is a car built to handle. It thrives in low-speed, quick-transition environments. It’s an elite athlete on tight, technical racetracks, and it feels just as exciting when darting through town. It’s incredibly communicative – I’d say it feels like a second skin, but the BRZ does a better job of talking to my brain than my own body does. I can easily sense how much grip is at each wheel, and I know precisely what my front wheels are doing. And to use a well-worn cliché, things are so sensitive, I can read a magazine by driving over it. It’s like driving a go-kart, but better and more refined, so there’s the same sense of fun when taking the corners at 5 mph or 50.

But let’s flash back a few paragraphs and talk to Subaru’s revised suspension tuning, or rather, the fact that this car is set up to be smoother. TL;DR – it makes for a comfortable ride, and that probably helped save my marriage.

You see, anytime I get a car that’s fun, my wife hates it. Fun cars are noisy cars; they ride too stiff and generally make her carsick. So when tasked with taking her in the BRZ Series.Blue from Los Angeles to Palm Springs for her birthday weekend, she was less than thrilled. That is to say, she was openly Googling divorce lawyers as I was opening her car door.

Lucky for me, the BRZ is a solid touring car. There’s enough space in the back for a couple of weekend bags, and with a host of standard luxuries like heated Alcantara seats, satellite radio and Bluetooth, it doesn’t feel like a cheap ride inside.

And Subaru’s suspension team knows what they’re doing. Despite its eagerness to change directions on the street, the BRZ Series.Blue is a steady highway cruiser. Road noise is minimal (for a sports car), and it's just solid at speed. This Subaru admirably soaks up road imperfections and feels calm and steady as it charges ahead. It’s easy to go too fast, however. 90 mph feels like 65, so it can get tiring keeping a constant eye on the speedometer. Not that my wife cared – she pretty much fell into a deep sleep 10 minutes into the drive, which for her, is probably the highest mark for comfort she can give.

Well, looks like I just found my new, unique take on the Subaru BRZ: It’s so comfortable, it makes your wife fall asleep.