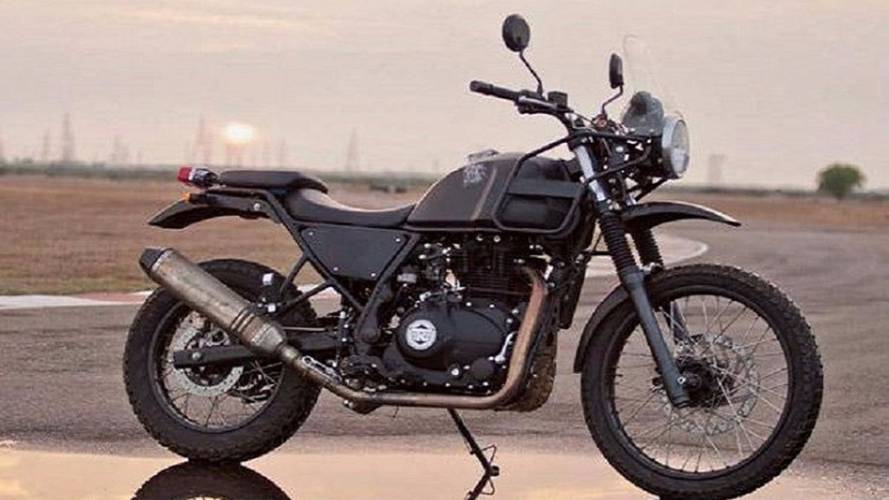 The Royal Enfield Himalayan marks the brand's venture into the ADV market.

Royal Enfield just announced their newest addition and it seems they are heading straight into the ADV market. Allow RideApart to introduce you to the Royal Enfield Himalayan.

The concept of the motorcycle has been around for decades and it's finally making its appearance on the world’s stage. Recently announced in India, there is chatter that the bike will be made available stateside. I spoke with a source at Royal Enfield North America and they are "currently working out the details on when it will become available.” We will keep all of you abreast as news develops.

The Himalayan has been in development for the past couple years, and it will feature a 410cc LS400 single cylinder four-stroke oil cooled engine that will produce only 25 bhp of power. Ride height and dimensions look to provide a nice standard riding position, and the addition of a 21-inch front tire will likely make for solid handling in the dirt. The fuel capacity is expected to be about 3.96 gallons.

Aesthetically, the Himalayan looks pretty sweet to us. But we love old classic-looking bikes, and this looks like a dirt bike and a cafe racer got busy and had a baby.

Like anyone that works for the company, Royal Enfield CEO Siddhartha Lal sings the Himalayan’s praises from the mountain top. You can read his full write-up of the bike here, but again, take it with a grain of salt.

After living with and reviewing the Royal Enfield Continental GT, our biggest concern for the new Himalayan is going to be overall quality, reliability and durability. I know, those are some pretty big concerns, but the press bike had bits falling off of it after 4000 miles and the electronic fuel injection systems were often spotty. Another huge concern will lie with the suspension, but we're going to have to wait and see what Royal Enfield brings to the table.

If this bike sees any kind of dirt in the Americas, it's hopefully built better than the GT. It’s definitely going to need to be robust enough to handle the punishment we've seen American ADV riders put on their bikes, but then again, we're not even sure this bike should or will be marketed to what we call "the ADV community." This bike just happens to fall into that class or perhaps "ADV-lite"

Until we get our hands on one stateside, here are a few videos Royal Enfield has on the development and testing of the Himalayan. I don't think anyone can argue against the point that this bike does look like it has the potential for fun.