Donuts with Sebastian Vettel and Talking Motorcycles with Daniel Ricciardo 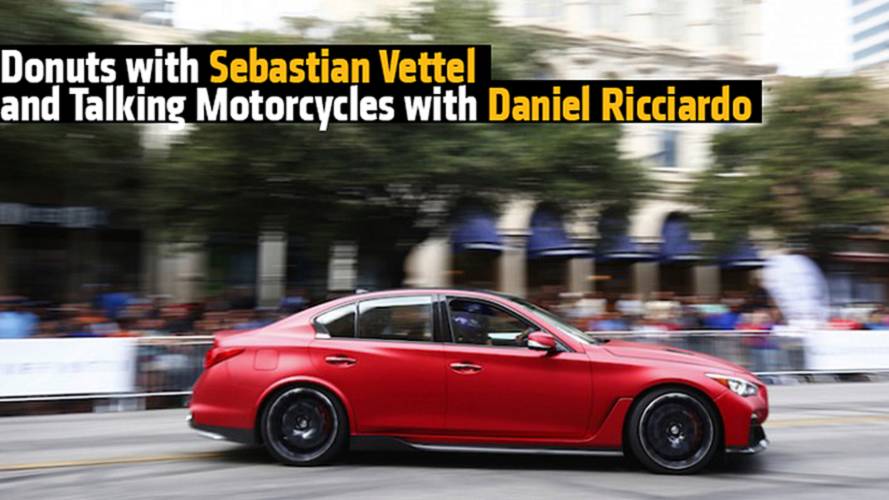 It's human nature to want something that you can't have. Remember Valentino Rossi testing for Ferrari, Michael Schumacher racing bikes after the first retirement or Mark Marquez recently admitting his desire to try F1 someday? Although few were quite as fortunate as dual-sport champion John Surtees. When you have guys that love going fast, naturally there's a healthy amount of crossover.

During the 2014 US Grand Prix week in Austin, Texas, I got a ride with Ferrari F1 driver Sebastian Vettel, in the new Infiniti Q50 Eau Rouge and had a chance to sit down with Infiniti driver and Red Bull teammate Daniel Ricciardo.

Shortly after out interview Daniel scrapped out a 3rd place finish at the 2014 US Grand Prix. I sat down to talk cars, bikes and life as an F1 racer.

I hear you love anything on two wheels. What would be the three bikes you would want in your garage?

Pretty much, I would go with the Ducati Desmosedici. I'd really like the Harley-Davidson Forty-Eight, but it would have to be customized. You know, get it worked a bit. And then a dirt-bike, probably just a 250cc, 4-stroke. Back in Australia, I have a KTM 250F. I’m not that good on dirt so a 450 is a bit too much for me. So, I’d have the best of both worlds: sport road, cruising road and a dirt bike.

What’s your preference? Street, dirt or do you like to cruise?

Dirt! I like dirt a lot. Growing up, all of my friends had quad bikes. Mum wouldn’t let me have a 2 wheeler so it was always an ATV. Now that I’m in my mid twenties, I got a bit more freedom so I finally got my dirt bike and I’m looking to spend a bit more time with it over .

Does Red Bull let you do any track days on a bike or canyon riding with friends back at home?

Yea, Red Bull is pretty cool. The brand itself has a lot of cool athletes doing all the extreme sports. The main thing they advise is not to do anything out of our limits or something we haven’t done before. If it’s something we’ve grown up doing or if we’ve got a good feel about it then that’s fine. For example, I’ve only skied once in my life and if I said I want to go to the top of that mountain and ski down with some mates, they’d probably say: “Yeah...you shouldn’t do that”. All the bike stuff is cool.

At what point did you realize you had what it takes to race in F1?

It probably wasn’t until quite late. I was signed to Red Bull’s junior program when I was 17 and it was probably after that year where I won my first race on European soil. That’s when I realized that If I can win at the European level then maybe I have what it takes. With the backing of Red Bull, I knew anything was possible. So, I was probably 18 or 19 years old.

Was there anyone you befriended while you were coming up in racing? Someone that you felt maybe had the same or even slightly more talent at the time but didn’t have the level of support from a program like Red Bull’s?

Unfortunately, the grid is so small and not all of us can end up in F1. I’ve raced against many talented kids even going back to Australia in Go Karts.

I guess I got Red Bull at the time for me and then delivered from there and kept that sponsorship. Like a lot of things its “right place, right time” but I had to back it all up.

How long did it take you to get acclimated to the 2014 car versus previous years?

A bit of time. Unfortunately, winter testing for us was pretty non-existent. We had a lot of issues mechanically and we didn’t do many laps at all. It was really Melbourne, the first race of the year, where we learned a lot about the car and how to drive it. After Melbourne was really where we started to feel a little bit more comfortable with the car. I guess, not until March or April.

I remember watching that first race, kind of shocked, saying “Wow, he came from Torro Rosso straight to the podium!” Was there a point during the race where you had to pinch yourself?

During the race I was definitely aware I was in second but I wasn’t letting any other thoughts or feelings sink in. I was just staying focused and making sure I got to the end.

I was probably more worried about the car breaking down than me making a mistake. We had never done that many laps in winter testing so reliability was our biggest scare. Once I crossed the line and realized I had got my first F1 podium, that was a pretty surreal feeling.

Coming from Torro Rosso, 7th was my best result and to go from there to 2nd was a pretty big jump.

How often do you get back into karting and are there any specific techniques that translate to the 2014 car?

I think the great thing about Karting in comparison to F1 is the power-to-weight ratio is very similar. In terms of keeping reactions and reflexes on point, karting is very helpful. I haven’t done a great deal of karting in the past few years. I actually just started up my own kart, Ricciardo Kart, which should be released in about a month. I’ll be definitely getting some testing done in that and I’m sure I’ll be spending more time in a kart now which should be fun. It’s more about finding the time to do it. I think if we could we’d all love to drive more because karting is probably the most fun form of motorsport.

You can’t go past Days of Thunder , that’s a good one. Travis Pastrana’s documentary 199 Lives was good as well but yeah...Days of Thunder.

We had the chance to ride in the Q50 Eau Rouge Infiniti concept and want it bad. Think GTR wrapped in four-door clothing. Photo courtesy of Red Bull

Our opportunity to hang with these two F1 drivers and Red Bull teammates came thanks to Infiniti and the new Q50 Eau Rouge. Named after the famous corner at Spa-Francorchamps,

Think of the Q50 like a GTR wrapped in a business suit. It also shared many aspects with the Infiniti Q70. The Eau Rouge's 560 HP V-6 engine and Brembo brakes were sourced from the GTR, while the AWD system and transmission were sourced from the Q70. This makes for a fantastic blend of luxury and performance, most notably, the brakes.

We had the chance to do a quick ride along as Sebastian tore up the streets of downtown Austin, which has been closed in celebration of the weekends race.

While this was a bone-stock car, it was the Eau Rouge Infiniti concept. That notorious Infiniti/Nissan exhaust note echoed off the downtown buildings. What was more outrageous than the sound was the braking, snapping me forward in the seat.

Speaking of, Seb actually got a little too sideways at one point but corrected it with impressive Jedi-like reflexes. The course was tight and you really get a sense why they allow these guys to demo this beast on the streets. They are more skilled than any normal driver could imagine.

Sensible gearheads will curb their expectations as this model is still a concept but it's hard not to get excited when you see it tearing up the streets in-person. Allow me to speak for everyone when I say: please make this car, Infiniti!