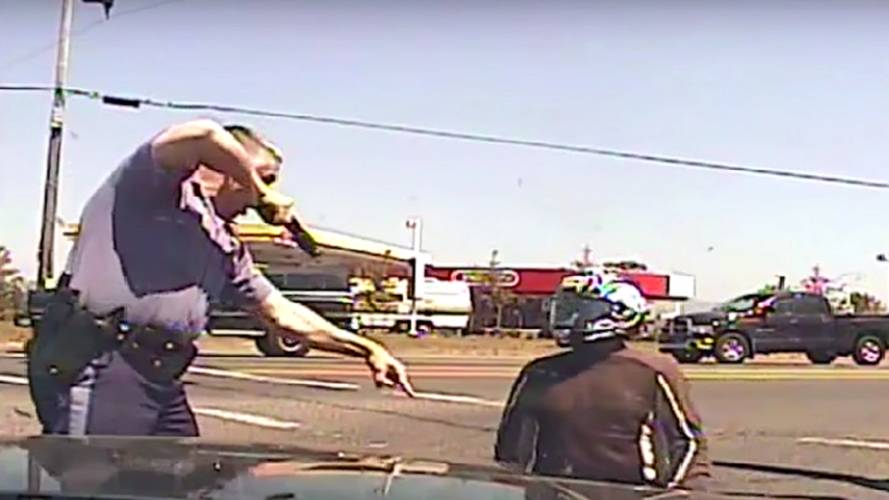 Motorcyclist awarded nearly a fifth of a million dollars after getting rammed by a cop car.

Motorcyclists and police tend to get a bad rap in today’s society. Police officers are seen as power abusers with a panache for exerting more violence than necessary (not all police officers), and motorcyclists are a bunch of law breaking, adrenaline junkie speed demons with no respect for those around them (again, not all motorcyclists). Here we have a story from 2012 where the two stereotypes collide.

TheNewspaper.com, reported: A jury on Thursday (Jan. 19, 2016) found Oregon State Police Captain Robert Wayne Edwards negligent for ramming a motorcyclist, Justin Micheal Wilkens, with his unmarked patrol vehicle and then kicking him in the chest. Captain Edwards has been ordered to pay Wilkens over $180,000 in restitution.

As the story goes, back in 2012 when this event transpired, Wilkens was enjoying a spirited ride—as we all tend to do when hitting the back roads—on his 2006 Aprilia along Crow Road near the town of Veneta in Eugene, OR when he drew the attention of a passing state trooper in an unmarked black Camaro (photos of the car here). Captain Edwards— then a lieutenant—flipped on his flashing emergency lights, but not the siren, initiating a three-minute chase where he was clearly outpaced by the sport bike, but not intentionally, according to Wilkens.

"You can't turn around 100 percent behind you when you're riding a motorcycle," Wilkens testified. "For one, you don't want to do that because you take your eyes off the road. The mirror on the motorcycle vibrates. His car was an undercover car with low-profile lights...When I found out that I was getting pulled over, I pulled over."

This is something you can see as he checks his mirrors at the 3:29 mark and when Edwards catches up to Wilkens. Wilkens even jostles his helmet in a manner that we have all done when we know we have done something wrong and are in the process of being pulled over. I'm sure he uttered an expletive or two.

Wilkens clearly makes an effort to pull over, only to be rammed by the unmarked Camero. Biker and bike go down. Upon standing up, Wilkens faces Edwards with a “What the F**k man?” hand gesture and proceeds to get back down on the ground. Before that happens, Edwards has his gun pointed at Wilkens and hits him with a front thrust kick square to Wilken's chest, fracturing his clavicle and a rib. The kick knocks Wilkins back, but he is still compliant with the officer and moves toward the ground. Edwards does not let up and aggressively pushes Wilkens into the ground whilst handcuffing him. Wilken’s medical bills would eventually exceed $31,000 due to this altercation.

Captain Edwards' use of force is disturbing and absolutely unacceptable, but what is more unacceptable are the fallacious arguments Captain Edwards and his defense team put forth to justify his actions. Get ready for these.

First, he attributed the ramming of the motorcycle to "brake fade,” which is the inability for a car’s brakes to function properly after heavy braking (this just doesn’t happen on modern cars running a highway for three minutes, it just doesn’t), an admission that he did not know that the dash cam in his car was on and recording the incident and his kung-fu kick to Wilken's chest (Captian Edwards is just a dick and this proves it). He acknowledged that Wilkens was complying with commands, but he kicked him anyway because the muscles in his leg had already fired (more justification that Captain Edwards is a dick.)

In the final decision on Tuesday, a jury found Captain Edwards "negligent" for striking the sport bike with his vehicle. They also declared the kick to the chest to be an excessive and unconstitutional use of force and have mandated that Edwards pay Wilkens $181,170 in damages—a price Edwards will likely pay for the rest of his life. Captain Edwards has not been suspended or relieved of his position within the Oregon State Police over the matter, and neither the police department nor Captain Edwards were available for further comment on this matter.

The full details of this report can be read at TheNewspaper.com, but if you were to ask my opinion as a motorcyclist and someone that has absolute respect for law enforcement, this type of behavior is simply not acceptable from people we expect to protect and serve the populous. Most every police department has communication systems/radios, and common practice would have been to relay the information to another patrol and catch this guy down the road to ticket him or arrest him if need be. A more level-headed officer would have made that decision, or simply not gone all car-rammy and Jet-Li on an unarmed guy. The actions Captain Edwards took are not becoming to the badge and what it means to be a police officer.

I don’t absolve the motorcyclist here for treating his local highway as a personal race track, but based on the video, I would not classify his riding as “reckless.” He is certainly deserving of a ticket and potential impounding of his bike for dipping in and out of lanes and breaking speed laws, but that's about it. One position I will take is, I commend Wilkens on how he chose to behave during the altercation. That tells us more about his character than anything else beyond a biker out having fun on his bike.

This should also serve as a learning lesson for motorcyclist and citizens. It should also remind you (yes, you the reader) to treat cops as though they are a step away from busting a cap in your ass. Communicate clearly and do not display aggression or hostility. Pray to god their dash cams are running and that you have a GoPro running yourself. Cops can be assholes with a power complex, but cops do a dangerous job. They often deal with dangerous people and, as a result, they are trained and conditioned to protect themselves first.

I have had many run-ins with the law on various occasions and as a very, very compliant citizen, I have had to be the one to diffuse a situation with police. Sadly, we are the ones who often have to play a psychological and communicative game. It sucks, but that’s just how it is these days and doing so can save your life or avoid other problems.

What do you think about the outcome of this case? Sound off below in the comments section.