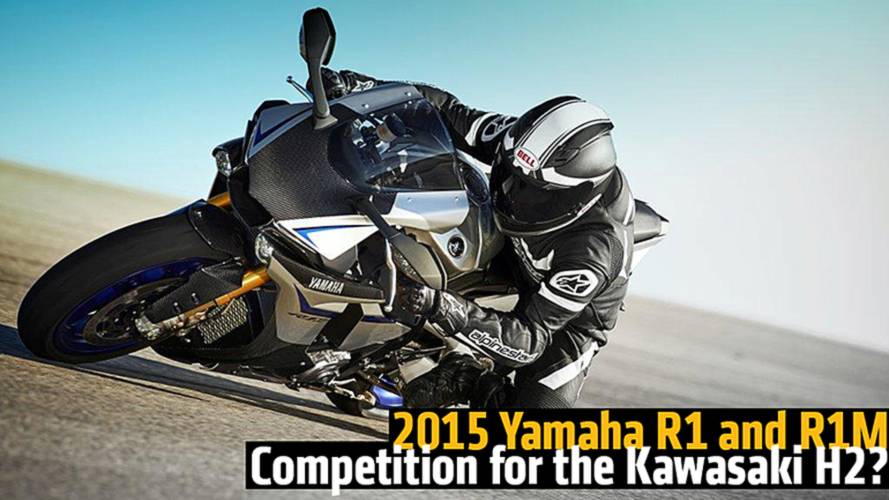 Yamaha did a simultaneous unveiling of the all-new 2015 Yamaha R1 and R1M today here in LA and at the EICMA show in Italy.

Although it probably doesn't have the power of the H2R (likely more comparable to the H2, but neither have released numbers), it does have far more electronics and track-oriented equipment than the Kawasaki.

The Yamaha R1M is a street-legal race bike and it's equipment includes a data logger that uses GPS signal along with ABS (lean and integrated - meaning it'll work both brakes even if you don't), quick shifter that blips the engine rpm, traction control, launch control and wheelie control. Despite being down on power… oh, how a supercharger has changed the world… it should give the Kawasaki a run for its money.

READ MORE: Do We Need Automatic Braking for Motorcycles?

The all new bikes, including a never before built model, the R1M, were built from the ground up with a 10mm shorter chassis, aluminum frame and magnesium subframe and wheels. The R1 hits the scales at 439 pounds wet, and while we don't have official word, with the add-ons of electronic suspension, computer components and the lighter weight carbon fiber body work, the R1M is projected to be just a couple of pounds heavier.

No word on engine output just yet, but there are a slew of crazy new electronics that represent many firsts for Yamaha and the motorcycling industry in general. Look for more in-depth information and photos shortly.

Yamaha says this is as close to a MotoGP race bike as you can get, and they seem to be right. The R1M will luckily be a fully street-legal bike.

The R1 and R1M will be up for sale in February 2015 for $16,490 MSRP and $21,990 MSRP, respectively. The big price difference comes from the suspension, as the R1M will feature Ohlins electronic suspension that you can set to your preference, including three manual and three auto modes that you can custom tailor. They include everything you can think of, from slide control, wheelie control, suspension feel and traction control, all through compacted systems that include data logging and mobile device outputs. Yup, you read that right, you can now tune your Yamaha on your iPhone.