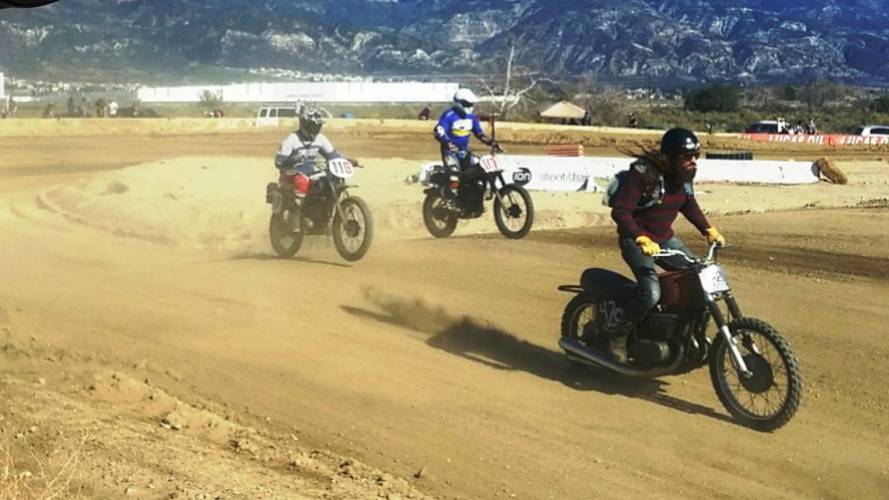 Inappropriate bikes and pros with matching outfits, the Hell on Wheels Stadium Steeple Chase was a wild time.

Hell on Wheels released a herd of bikes on a Trophy Truck race track and the results were awesome.

Glen Helen to Southern California motocross racers is like Darlington to NASCAR fans: They both have been around forever and are much loved. A few years ago, Glen Helen added a permanent "Trophy Truck" race track, for a series that holds maybe two events there a year.

Meatball and the folks from Hell on Wheels had the idea to race motorcycles on it, shortly after seeing it for the first time two years ago. Unlike a normal motocross venue, this track is all rolling hills and sweeping banked turns where bikes can get going a whole lot faster—an ideal track for the assortment of old Harleys, inappropriately converted street bikes, and vintage twins that Hell on Wheels attracts.

No Gear, No Problem?

Once again my equipment let me down, both motorcyclically and photographically. My beloved Husqvarna started and ran on Saturday, but apparently has an air leak because it wanted to do that scary 2-stroke run away, despite the kill switch being pressed. The camera was my own dumb fault, I forgot to charge the battery. My LG G3 cell phone seems to have been designed to take cool retro pictures that look like they came out of a 1980s Kodak Disc camera, but I did get a few decent shots.

When a group of guys at a race all have matching outfits, you tend to take them seriously. When it's a dirt event and they are all in spotless all white gear, it tends to indicate they are real pros when it comes to off-road. The White Lightning team from Fasthouse did not disappoint.

The Von Zipper Freewheelers team was also out in force, decked out in their black and yellow gear. Though, these guys may be a little too hip. However, when you come out and actually mix it up on the track and not just try to market to riders, I can forgive the skinny jeans and store bought hair cuts. Especially since I always rooted for Eric Von Zipper and the rest of the Rats/Mice in the Frankie and Annette Beach Party movies.

Brat Style, the Japanese custom shop, was also there with two or three vintage Harley-Davidsons, and maybe a dirt bike or two as well. If you have ever seen a bike online referred to as a Brat, it all starts with this little shop, which now has a toehold in Southern California in Long Beach. Brat Style bikes have always had a unique mix of flat track, bobber, cafe racer, and chopper aspects to them.

The Best and the "Worst" Bikes

As far as the least appropriate bike out there, it is a bit hard to choose. I think it is a three-way tie between the 1928 Harley (likely worth five figures, even in rough condition), the 1975 Suzuki GT380 2-stroke triple (with Piels Beer tray number plates), and the 1980 Honda C70 Passport (with original leading link fork and Lifan 125cc power).

When you consider that the Honda Super Cub (Passport in this country) and its clones are far and away the number one selling motor vehicle of all times, it's hard to believe they aren't a support class at every single motorsport event. Slow and poor handling, but cheap and unkillable, they would be an ideal entry level ride in everything from road racing to motocross. They don't make for dramatic action shots, but I did get some of those as well.

As always, the whole point of Hell on Wheels events is to have fun, in a laid back race that doesn't intimidate novices and first time riders. Not sure when the next event will be, but there will surely be the traditional Hell on Wheels motocross rally in mid June, so you have plenty of time to find a ride on Craigslist.

I did not shoot any video, but this excellent footage is from Fasthouse's White Lightning riders.