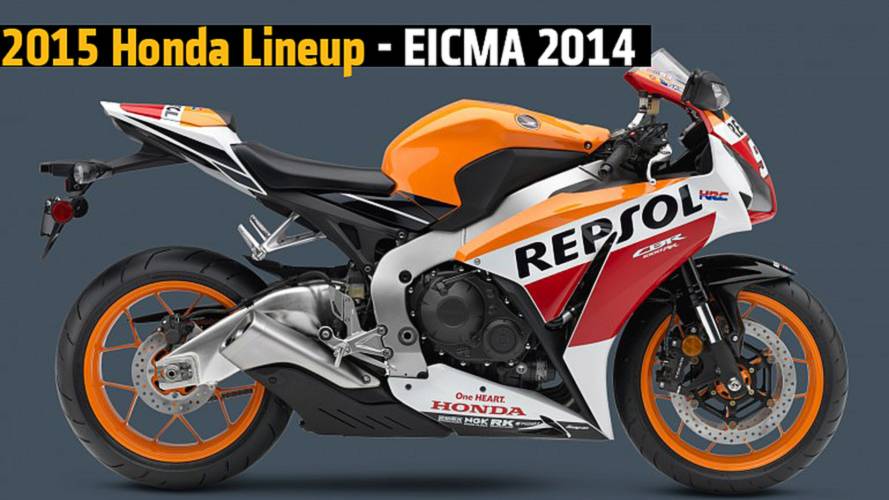 Honda, having dominated MotoGP and WSS this year, is playing up that racing heritage big time. Who can blame them? With Marc Marquez able to possibly break Mick Doohan's modern day record of 12 wins in a season, Michael van der Mark winning the WSS title in just as dominant a fashion and their WSBK team signing both van der Mark and reigning WSBK champion Sylvain Guintoli, things are coming up roses for Honda.

The CBR1000RR remains unchanged from last year. With excellent handling, good power delivery, and ease of ride there was no need for major changes. Competition is certainly heating up with the new R1 and H2, so we will see what Honda does with it next year. There are new paint schemes to celebrate the MotoGP bikes, giving buyers the option to make their rides look like Marquez' or Pedrosa's. The SP also continues on with that old school red, white, and blue, along with its more track-oriented equipment.

Now comes in black! (Unfortunately, as of press time there were no photos of the black CBR600RR available to us.)

Honda's upright naked bike is a capable but well-mannered hooligan bike that gets a new color for next season. It now comes in Red.

Last year's return of the middleweight Interceptor is still receiving rave reviews. Why change what is still a brand new motorcycle? You wouldn't and Honda didn't - not even the color.

Just available stateside, the CBR650F and ABS model are now in an ideal location for a middleweight naked bike that can do it all. Competitive in the category for power and size, the 650 is a delight.

Available in both standard and ABS versions, the CBR500R combines aggressive looks and a riding position that promises to be sporty but comfortable. The result, says Honda, is a versatile middleweight machine that’s great for everything from recreational riding to commuting. It also comes in Silver!

Same motor, totally different animals. The CB500F has that classic, upright riding position, naked-bike styling and a low seat height. The CB500X is an adventure-style bike with an adjustable windscreen, wide handlebar and a generous 5.5 inches of front suspension travel, 4.7 inches at the rear.

Take a Gold Wing, rip off all the extra bits and pieces and slap LED lighting, a slash-cut muffler, 10-spoke cast aluminum wheels,and  a customizable seat and you get the Valkyrie. Big power, smooth as butter on hot toast, and the size of 1977 Chrysler New Yorker, it is made to pound the urban jungle while appealing to those who prefer the classic Gold Wing style and ride.

Move along - nothing new to see here.

Much like the original VW Bug, this bike has remained unchanged since the Carter administration.

A great middleweight adventure styled bike that is comfortable, capable, and reliable.

From the press release: "Honda’s popular and lightweight CRF250L is a fuel-efficient dual-sport bike that’s both fun and practical. The fuel-injected, DOHC single-cylinder engine has an electric starter and plenty of low- and midrange torque, while the long, motocross-style seat and upright body positioning are comfortable on the road or in the dirt. Front and rear hydraulic disc brakes are standard."

From the press release: "Combining MX-focused parts like the Honda Progressive Steering Damper with trail-ready features including a headlight, LED taillight, electric starter and 18-inch rear wheel, Honda created a great off-roader that’s ready for everything from the woods to the desert. The 449cc liquid-cooled engine with Unicam head and titanium intake valves delivers a wide, smooth powerband, and works-style hydraulic disc brakes front and rear slow things down in a hurry."

From the press release: "While the CRF250X receives technology from Honda’s successful quarter-liter MX machine, it also gets off-road-specific features like a wide-ratio gearbox, retuned suspension and electric starting. With a compact, lightweight Unicam engine boasting twin-sump lubrication and a gear-driven counterbalance, as well as a standard aluminum Renthal handlebar, the CRF250X is ready to rule the trail."

That is a lot of motorcycles and there are more to come from Honda. It's no wonder they are the world's largest motorcycle manufacturer.