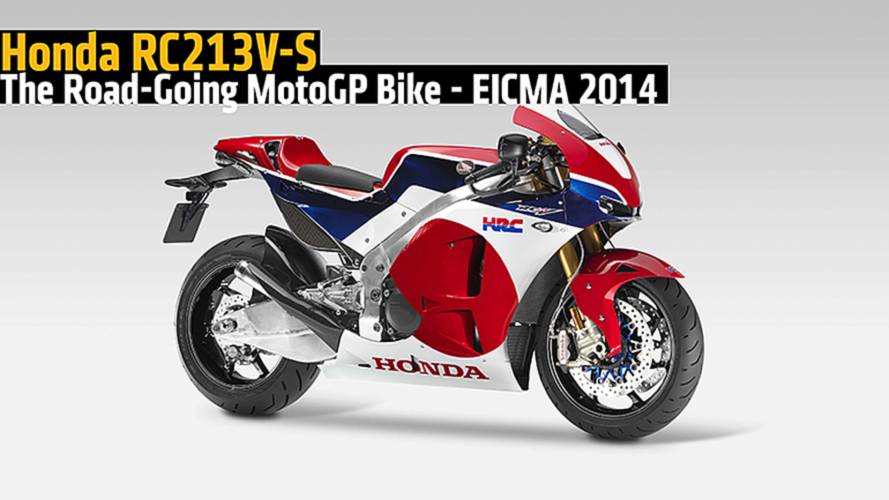 The RC213V-S: Honda's Road-Going MotoGP BikeWhile the EICMA spotlight has been firmly fixed on the debut of Yamaha's new R1 and Kawasaki's H2, Honda...

While the EICMA spotlight has been firmly fixed on the debut of Yamaha's new R1 and Kawasaki's H2, Honda was not going to be outdone. Big Red rolled out two prototypes in Milan, incuding the RC213V-S, a road-going version of their dominant MotoGP machine, fitted with the requisite lights, mirrors and tires to make it DOT-compliant.

Overall, the bike preserves the smooth, businesslike aesthetic of the race machine, although the placement of the mirrors seems a bit of an afterthought. Still, the fact that the bike comes with lever guards is a nice touch, and the integration of the lights is unobtrusive.

A full carbon version was rolled onto the stage by none other than reigning World Champion Marc Marquez, and it was joined by a painted-up version that is every bit as beautiful. The rising sun graphics on the sides are particularly cool.

Rumors of a new Honda V-4 superbike have been swirling for years now, but if one is coming, this probably isn't it. More likely, this will be an exclusive offering for those Honda faithful with big checkbooks and fine taste, a la the Ducati Desmosedici RR from a few years ago.

Specifications and pricing are not yet available, and may not be until next spring, as the bike is still in development. But if the bike is offered in the US, expect power numbers well into the 200s, and price tags something like a decent family home.