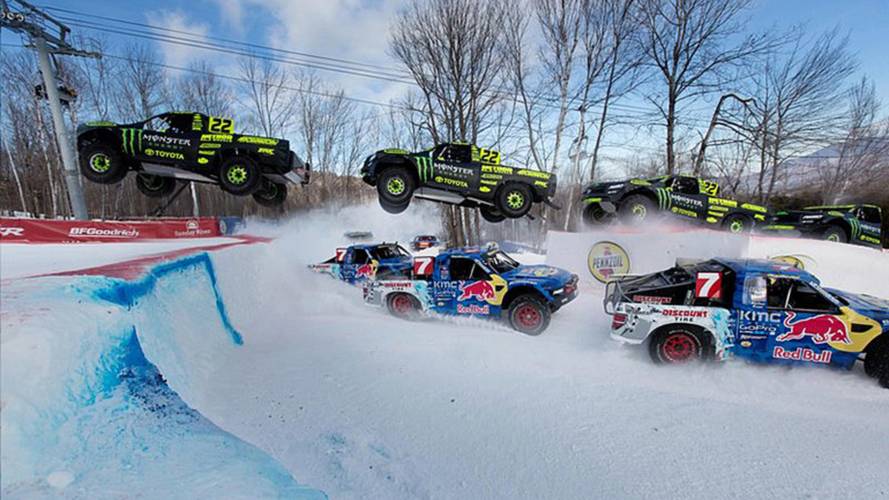 Frozen Rush takes Pro 4 trucks and throws them into an exciting melting pot of racing styles.

The over-under cross jump is a rarity on the short, snowy custom course at Sunday River Resort, but when the timing lines up, it’s a thing of eye-widening beauty. One truck furiously kicks sideways around a wide 180-degree turn on the blue route while the other takes flight, spinning its spiked “death tires” just feet from its competitor below, over the packed ramp-to-ramp jump on the red route.

It’s also a representative snapshot of what Red Bull Frozen Rush is all about.

Now finished with its third year in Newry, Maine, the wildly imaginative race is a mixture of the dust-spraying, suspension-traveling world of off-road truck racing, leaping motocross action, alpine skiing slippery speed, and March Madness. And maybe throw in a twist of Mad Max because of those tires. Seriously, they’re absolute automotive weapons.

Pennzoil, one of the sponsors of the event, invited me to come experience Frozen Rush earlier this month. There were no crazy gimmicks and no demonstrations. Their reps told me that some of the drivers and trucks use the oil, and that was pretty much it. I was more of a guest rather than another marketing tool, which was a nice change of pace for a expenses-paid press trip.

I got lucky this year. Rather than the temps dropping into single digits, they were steady around the twenties and thirties, which are pretty ideal for my midwestern blood. Living in LA now, I’m one of the weirdos who truly misses winter and seasons, so being surrounded by the white fluffy stuff was a treat. The warmer temps, however, made for sloppier conditions, and made those tires we keep mentioning even more important. So let’s start there and work up.

The tires used in typical dirt off-roading didn’t fair well when testing first began for Frozen Rush. They were too slippery. So, spikes are added to create claws that grab rather than skates that glide. On these special tires, there are more than 700, and they’re all hand-crafted.

Däckproffsen, a wheel store in Sweden, is trusted with the arduous task. There, extra grooving is hand-cut into the BFGoodrich All-Terrain T/A FR2 for a more aggressive slush-clearing pattern. Holes are hand-drilled, glue is injected, and a worker uses a studding machine to implant each spike. It’s a good thing this is a one-year event and there are only nine drivers.

As for the trucks, they’re essentially scooped from their natural dirt habitats with minimal alterations. These are Pro 4s and the major difference is things like thermal blankets, used on some of the parts to help eliminate heat loss rather than focusing on keeping things cool like in the desert. The interesting part is that every truck is different, due to a lack of strict regulations.

The frames are different, the suspension setups are different, the engines are different, and even the transmissions can be manual or automatic. The main two equalizing points are that they are four-wheel-drive and that there must be a 10/1 pounds-per-cubic-inch ratio. For example, Bryce Menzies’ truck was 4,600 pounds with an approximately 450-cubic-inch Ford motor (yes, I realize that doesn’t add up 100 percent, but that’s what he told me) that puts out 950 engine horsepower and 820 lb-ft of engine torque. For some extra context, his truck is 66 inches tall, 204 inches long, 91 inches wide, has 10 inches of ground clearance, and has 18 inches of wheel travel in the front and 20 in the rear. Pro 4 is the only class that has an essentially unlimited set up like that, and it makes for extraordinary machinery.

Maine is an interesting choice for having an off-road truck race on a ski slope. When I think Red Bull, I think action sports, which triggers thoughts of the X Games. Winter X found its home in the massive mountains of Colorado, the land of fourteeners that make you feel nearly non-existent in this world. Maine’s biggest mountain, Mount Katahdin, is barely higher than 5,000 feet and nowhere near Newry. The mountain at Sunday River rises to 3,150 feet, so it’s not towering, but the winter-blanketed forestry is still more than fit for a postcard.

One of the most fun parts about Rush is that Sunday River doesn’t shut down its runs. Newry has a population in the hundreds, and on these event days, it’s flooded upward of 10,000, yet the regulars can still do their thing. They might have to stop short of one of tens of free Red Bull stocked coolers or the gear tent, but it could be worse. The exposure to a completely new part of the country and group of people is a major key to the marketing. And free advertising doesn’t get much more thrilling than taking a ski lift up a mountain, looking down and knocking some snowflakes onto a 900-horsepower dragon whipping around beneath your skis.

The course is relatively unassuming, save for the giant blue start and finish line overhangs and a massive bank that rolls into it. It’s not some insane 200-foot X Games ramp display you could see from miles away. As a safety precaution, there are two inter-looping tracks (rather than driving next to each other the whole time), a blue one and a red one marked by flags and spray paint on the snow. The format is simple: Nine drivers, bracket-style (with one play-in race), lose-and-go home. The opening rounds and the semis are four laps and the final is six. All that travel, all that time and effort, and you can be done in four laps, just a matter a minutes.

Witnessing these trucks and this race felt like watching an extension of Nitro Circus. The engines are screaming, often sounding like they’re gasping, as the needle lives at high RPMs and the wheels are constantly searching for traction to put that power into the earth. What’s happening in front of you doesn’t really register at first. Trucks with spikes drifting like water skiers, coming around turns and going straight into jumping a 30-foot gap, during which the machine floats about 30 degrees sideways and the four-wheel drive has to rip the body back into place when it lands. I had multiple “humans are the freakin' best for building and creating something like this” moments.

I mentioned March Madness earlier, but in reality, this requires even more focus and is even more cut-throat. I saw people get a poor start off the line, and they were done for. One exaggerated line around a corner, and they were done. One stall, and they were done. Scott Douglas, unfortunately, put on a terrifying first-of-its-kind display at Frozen Rush when he was pushing to the finish against Rob MacCachren, clipped one of the snow walls, and rolled his Pro 4. He made it out just fine, thankfully.

You truly can’t make any mistakes, which would explain why eventual champion Bryce Menzies told me that this is equally or more exhausting during those few laps than any other race he’s been in. And he’s raced Baja. The conditions, how the trucks run, and how the course feels all change throughout the day. It’s not a long day, but the temperatures change, snow turns to ice and vice versa, and there were multiple runs of dirt by the end of the race, which completely changes how your handle the vehicle. Every run is a new test.

Menzies has now won Frozen Rush two years in a row after beating 51-year-old motocross legend Ricky Johnson in the finals. In fact, the truck he was driving has now won all three years of the event after winning the first running under direction of Johnson. Menzies and his team have only improved it with ways to keep its mechanical parts warmer, and to find better-reacting set ups. The 28-year-old and his winning Ford certainly have a supremely bright future in a race and sport that are in promising infant stages.

What Red Bull is doing with the entire Signature Series, which also includes equally maniacal things like extreme downhill mountain biking with obstacles in Rampage or the snowboarding double pipe is

Video of the event courtesy of Red Bull

Protege and Master Face-Off In the Finals