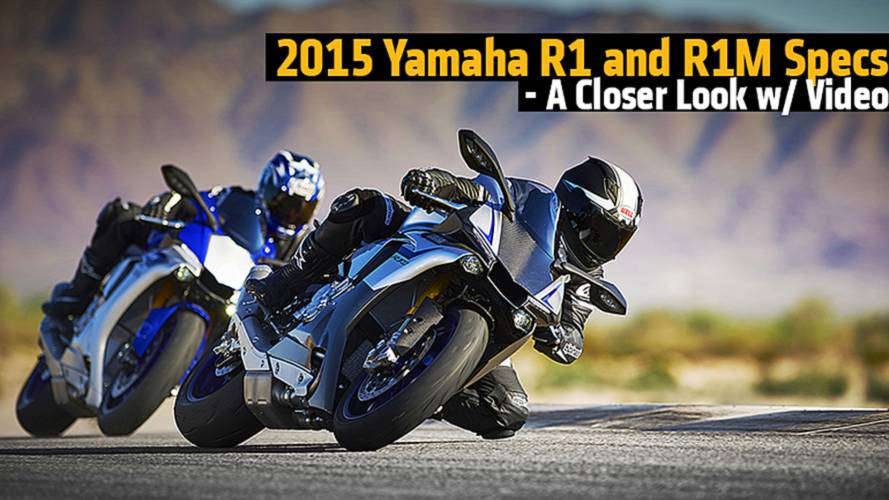 2015 Yamaha R1 and R1M Specs - A Closer Look w/ Video Frankly, this has been an awesome year for motorcycling. The manufacturers are beginning an...

Frankly, this has been an awesome year for motorcycling. The manufacturers are beginning an arms race, setting records with every piece of news and developing technology we’ve never before seen in motorcycling, and some we’ve never even seen with cars.

Yamaha wasn’t going to be outdone this year on their home turf, the racetrack, by some little supercharged Ninja. All-new for 2015 is the Yamaha R1 and the never-before built Yamaha R1M.

Both bikes will feature the same basic components and the signature 1,000cc cross plane engine. Designed for the racetrack, covered in carbon-fiber fairings, the R1M still retains mirrors, tag mount and even a snap-on rear seat and peg mounts. “The R1M blurs the line between a Moto GP bike and a production bike," said Aaron Bast, Senior Product Planner at Yamaha

The first R1 was intended to be a great road worthy sportbike. “But that changed this bike was designed as a race bike first and foremost,” said Aaron.

The aluminum Delta box frame is all new, but overall the chassis is similar to the previous generation. “From the very beginning our engineers were able to start from scratch,” said Aaron. “We built a level of motorcycle that, up until now, only factory riders could experience.”

The new blue magnesium wheels save two pounds front and rear. The subframe is also made from magnesium. Another big weight saver is the aluminum gas tank, which saved a whopping 3.5 pounds over the steel tank.

The R1 hits the scales at 439 pounds wet, 15 pounds lighter than last year’s model. The R1M, despite having its carbon fiber fairings, weighs in slightly heavier at 443 pounds. That’s primarily due to the added suspension electronics and data logging electronics. The wheelbase is almost half of an inch longer than last year’s, at 55.7 inches.

While Yamaha is sticking with its signature crossplane crankshaft engine design, this is an all-new engine with more compression, 13:1 over the 12.7:1 compression from last year’s model, 45mm throttle bodies, lighter forged pistons and larger valves.

The bore went up and the stroke down, making the engine an even more oversquare bore engine:

The shorter stroke reduces piston speed and offset cylinders greatly take stress away from the rotating assembly. Lighter weight pistons, off-set cylinders, fraction-split titanium connecting rods (first time ever on a motorcycle) are all factors that basically mean there is far less stress being applied to the pistons. Less stress means a longer life, better able to withstand to upgrades and more efficiency.

Yamaha lost nine pounds in the block thanks to magnesium oil pan, valve and side covers.

The R1 and R1M have the same basic engine, although there's been no confirmation on the power differences; the major difference in money comes from the suspension and electronics.

The R1 will feature 43mm KYB® forks up from and a KYB® Single shock with piggyback reservoir in the rear. Both bikes will have 4.7 inches of travel but the R1M will have a slightly higher seat height at 33.9 inches.

The R1 is projected to make north of 190hp at the crank, but that’s not confirmed from Yamaha. We’re hoping the R1M will make more power, but if it does it’ll more than likely be due to exhaust and intake, possibly different cams. The overall engine design is the same between the two bikes. Unlike the H2, the Yamaha R1 and R1M will have the same power figures, making 200hp at 13,500 rpm and 83 ft-lbs of torque at 10,000 rpm.

There are a lot of firsts for the R1 and R1M, including the slew of adjustable electronic aids. There are 3 automatic settings and 3 manual setttings and the computer allows you to hand-pick your preferred level of intervention with every aid.

We got to play with the computer and it was easier to use than an iPhone, with a large LCD screen and roll-push dial on the right clip-on. There you can go into the menu and create custom combinations that you can save for a particular track or riding style.

All of this falls under the Yamaha Ride Control, which uses the Yamaha Inertial Measurement Unit (IMU). The IMU uses a gyro sensor, GPS unit and a G-sensor, and measures attitude, lean angle, acceleration and brake pressure across six axis.

The Yamaha Rider Adaptive Technology does the following actions upon on the Ohlins suspension, reacting and collecting data 125 times a second:

That’s a given; it has several auto and manual options and can cut power significantly or not at all.

This is a first for a production motorcycle. Yamaha took it straight from the 2012 YZR-M1 race bike. It’ll slightly cut power when it feels the bike is greatly leaned over and the rear tire slides.

We know this as wheelie control; luckily it too can be turned off.

A rarity on any bike, the launch control will limit rpms to 10,000 and again can be adjusted depending on the conditions from the slick mode to rain mode.

This will blip the throttle for just an instant to allow for quicker shifts without backing off the gas.

The integrated ABS will work both brakes even if only one is applied. It has includes lean-angle ABS which will send a different, unique signal to actuate the ABS signal to the brakes when the bike is leaned over; this will keep the bike leaned over even if you grab the brakes hard.

What Do You Think?

It’ll be fascinating to see this bike against the competition, as the Kawasaki H2R is the Big Green’s race version with 100 more hp, but no tags, mirrors, etc. and the R1M could retail for a half or more of what the H2R will retail for.

Like everyone else, we’re only able to make these far-off assumptions based on the paper spec sheet. We’ll know for certain when we get to ride the bikes early next year.