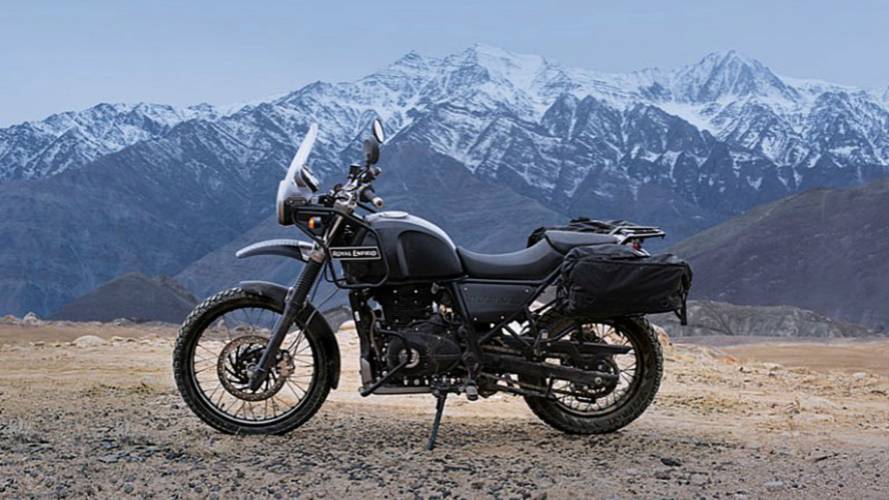 Some updates on the Royal Enfield Himalayan.

Earlier this week, Royal Enfield officially introduced the Himalayan in India. The Royal Enfield stands by the assertion that the Himalayan paves the way for a purer, non-extreme and more accessible form of adventure touring in India specifically. I kinda like how they mention right there at the top that it's not made for non-extreme adventure touring.

The Himalayan is surely being built to suit the needs of the Indian motorcycle market and spill over, as they will push to get the motorcycle in the hands of American riders based on the interest Royal Enfield North America has expressed to increase their market share in the United States. This will all be predicated on how successful the bike is in India.

Here's what Royal Enfield has officially released about the Himalayan. While nothing drastic has come out, there are some good tidbits:

Built on a "rugged duplex split cradle frame" designed and developed by Harris Performance, the Himalayan claims to be equal parts stable and agile. The rear features a mono shock suspension with linkage that allows for longer travel and delivers a smoother ride experience regardless of terrain.

Royal Enfield fails to mention who the manufacturer of the mono shock is, which has me concerned because the last thing I want is some bargain basement, built by the lowest bidder spring protecting my ass and bike in rugged terrain.

The Himalayan possesses an 8.6 inch ground clearance, which ensures that it could be capable of gobbling up obstacles in the wild. But that's only if the suspension is any good. I would be weary of jumping on this bike.

Royal Enfield’s own marketing video showed the bike bottoming out with a professional racer on the pegs after hitting what looked like a couple feet of air time. I would bet dollars to donuts that that racer was not 6’5 and a healthy 220 lbs like I am. The Himalayan is also fitted with a 21-inch front wheel, which has become increasingly popular on adventure-style motorcycles and could prove useful for the inexpensive ADV bike.

Again, nothing mentioned by Royal Enfield on actual travel specs for both front and rear suspension nor any details on how much adjustment is available for those linkages.

The Himalayan will be powered by a completely new overhead camshaft engine platform that forms the base for its new long stroke LS 410 engine. Again, no exact specifics on what the engine’s bore and stroke is, but the engine is anticipated to put out a whopping 25 hp. There is a claim of high torque at lower RPM’s for better slow speed maneuverability, but I can't imagine how that’s going to occur.

Speaking at the launch of the Himalayan, Mr. Rudratej (Rudy) Singh, President of Royal Enfield said, "What excites me about our new motorcycle, is that it fundamentally builds on Royal Enfield‘s core philosophy of balancing aspiration with access. It allows both seasoned riders as well as enthusiasts to do more with just one motorcycle. The Himalayan serves the purpose of a seasoned rider and at the same time opens the roads (pun not intended) to many more people who will get the confidence that they can ride on and off the road less travelled, going beyond their day-to-day commuting needs."

“Functionally, the Himalayan‘s non-intimidating spartan design, a flat torque curve, accessible seat height and long suspension travel alongside the ease of ownership, make the Himalayan an extremely versatile motorcycle that is adept for long rides while equally being the definitive choice to navigate our urban jungles," Rudy added.

The Royal Enfield Himalayan will come fitted with dual-purpose tires, which promise to lend confident grip and performance across a range of conditions. In addition to complete braking control, the 300mm front and 240mm rear disc brakes help to reduce braking effort.

Royal Enfield has invested significant time and effort in testing the Himalayan extensively with experts for both off-road and on-road manners. Starting from the Bruntingthorpe airfield in the UK and ending at the race track in Sriperumbudur, Chennai, the motorcycle has been tested over hundreds of thousands of miles and varied terrain. And all, of course, before even sniffing the production line.

The Royal Enfield will come in two colors, Graphite Black and Snow White. Pricing was not set at the unveiling. We will likely not see pricing for this bike in the US for another 6 months.

The second this bike is available in the United States we are taking it out to the mojave desert to see what it’s capable of. If I am the one that gets the assignment, I’m going full-on moto-camping. I just hope I don’t get stranded and die out in the desert...

What do you want to know most about the new Royal Enfield Himalayan?