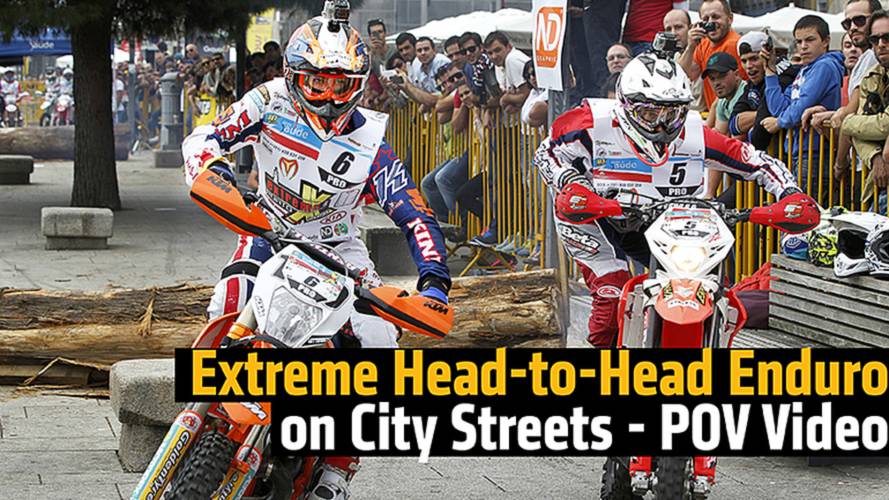 An Enduro contest held on city streets is as cool as it sounds.

Red Bull riders took to the streets of Lagares, Portugal for their event, Extreme XL de Lagares, over October 11 and 12, 2014.   For two days, contestants made the town of Porto and dense forest terrain of Lagares their playground.  This event marked the end of Red Bull’s 2014 Hard Enduro season, which featured their team of riders tackling hardcore terrain conditions in different locations around the world.

The best way to grasp the true nature of the heart-pounding obstacles the Hard Enduro contestants tackle during their races is from a GoPro camera’s point of view.

In the video below, you'll see Beta team rider Ben Hemingway’s point of view as he races KTM’s Andreas Lettenbichler through the city of Porto for day one’s grueling course.  He starts the race off by climbing over large logs strewn over the slippery rock roads, followed by a series of sharp turns up and down narrow pathways of stairs.  Each turn reveals a new, seemingly unpredictable obstacle.  At times, the narrow pathways are cut in half by rails, and you wonder how he manages to squeeze through while remaining upright at such high speeds.

This race was truly a test of physical endurance and mental wits.  There is no room for mistakes or delayed reactions on a course like this, as one slight mishap could lead to devastating injuries.