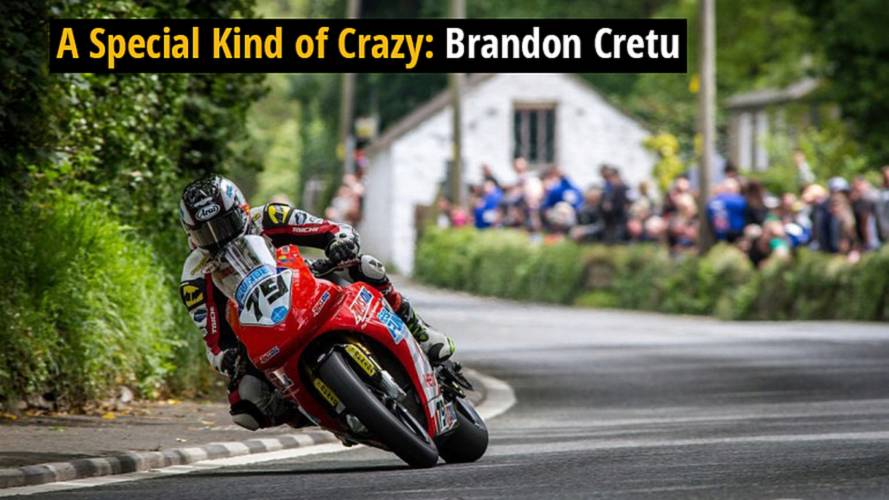 American roads racer Brandon Cretu sits down with us before his trip to the Macau Grand Prix to talk racing, adrenaline, and the EBR 1190RS.

Some would argue that the rational response to a life-threatening event would be to take things a little easier. Maybe pursue a lifestyle less fraught with risk than you had previously, enjoy some nice walks on a nature trail, that sort of thing. Motorcycle racers, however, are not known for being conventionally rational people. Real road racers, like American rider Brandon Cretu, are a further subset from short circuit racers; a special kind of crazy.

Cretu may be crazier than most. It's not unheard of for a motorcycle racer to suffer serious injury and still come back to the sport, just as fast and fire-breathing as they were before the incident. But Brandon broke his neck (in a car accident) before even turning a wheel on a road circuit, and decided to do it anyway. In fact, that's how he discovered it.

His rise from rural Pennsylvania to the international stage is substantially different from most racers. He didn't grow up on dirt bikes, and only bought his first street bike around the age of 20. After his friends got hurt and quit riding, he decided to take it to the track. Soon he was at his first race, with WERA at Virginia International Raceway in 2006. He was immediately fast, winning the WERA Northeast Novice Middleweight Championship in his first season.

The plan was to campaign the Expert series the following year, but that season was cut short in July 2007. Cretu suffered a fractured C1 vertebrae in a car accident, and was laid up in his house for the next 4 months. While he was recovering, all he could think about was getting back to racing. It was during this time he discovered the Isle of Man TT, and he was immediately transfixed.

"I was browsing the internet," recalls Cretu, "and somehow came upon the TT, and became enthralled by it. It's all I wanted to watch, highlights of old TT races. I was doing all this research, and I kept telling everyone, when they'd come over and visit me while I was all banged up, 'I'm gonna do that race!'"

READ MORE: Cheaper to Keep Her: Why You Should Keep Your Old Bike

None of his friends believed him, but Brandon made it a priority. While he wasn't yet fit enough to ride a bicycle, let alone race a motorcycle, he devised a three year plan that would see him racing at the Isle. In 2008, while he continued his recovery, he worked as a crew chief in the WERA National Championship, and made his first trip to the Isle of Man to work for a team racing superbikes in the TT. While he was there, he networked and soaked up as much knowledge as he could, including making contact with fellow American Mark Miller.

2009 saw Cretu return to the track, where he contested several regional WERA Expert rounds. He also made his road circuit debut, traveling to Northern Ireland to cut his teeth at the Ulster Grand Prix. But that was only a preview to 2010, when his plan came to fruition, and he raced the Isle of Man TT for the first time. He became the youngest American to ever compete in the TT that year, and has returned each year since, steadily gaining speed.

Building on that resume, Brandon interned with the Splitlath Motorsport team at the Macau GP in 2011, in preparation to race there himself the following year. This year's Macau Grand Prix, to be held on November 17th, will be his third. He will again be racing the EBR 1190RS for Splitlath alongside veteran teammate Mark Miller, as the pair continue to build on their success at Macau and the Isle of Man.

Cretu has found the Erik Buell Racing machine to be a bit tricky to learn, but a blast to ride once he adapted to the style it requires. The big torque of the v-twin engine means short shifting out of corners and in technical sections, but the handling is deceptively light.

"It almost corners like a 250 GP bike," he says. "It deflects so easily, it's so nimble and so planted in the turns. Once you figure out how to ride it, it's super easy to ride."

Although they are the two premier street course races in the world, the Isle of Man TT and the Macau Grand Prix could not be more different. The races at the Isle are time trials, held on a long, fast circuit that starts and ends in the otherwise cozy town of Douglas. Macau is a traditional race format, with 32 select riders lining up and duking it out for 12 laps through the Armco-lined streets of the most densely populated city in the world. Neither race is something you'd expect someone with a broken neck to find appealing. Just look at this footage from last year's race at Macau, from onboard Miller's EBR:

The obvious danger of racing on road circuits doesn't phase Cretu, despite his previously broken neck and the back injury he sustained in a crash at the Isle in 2012. His reaction is almost nonchalant:

"I'm not gonna live the rest of my life in a bubble."

And he doesn't. Eschewing the gym, Brandon prefers to get his training in on the rocky, fast, downhill trails of Eastern Pennsylvania and West Virginia, where he throws down on his new carbon Santa Cruz mountain bike. And when he's not racing or training, or handling the PR and logistics for Splitlath, he holds down a "normal" job and is finishing up his MBA. Boredom is not among his problems.

But neither is he an adrenaline junkie, the way most people would assume. For him, carving past rock walls or steel guardrails at triple digit speeds is where he feels the most calm. Rather than the heart-pounding rush one would think he craves, his mindset on the bike is one of relaxed focus.

"You're in a state of just flowing with the race track and being one with the bike," he says. "You don't have these surges of adrenaline like people think you have. You're not in your helmet screaming the whole time... I'm normally a very ADD person; I can barely pay attention to save my life. The only time I am focused is when I'm on my motorcycle or on my bike, where I can be 100% focused."

READ MORE: How to Make a Motorcycle Survival Kit

He'll need every bit of that focus at Macau, where he hopes to crack the top 20 of a very deep field, against some of the best riders and most advanced machines in the world. Follow Cretu and Splitlath on Twitter for updates, and stay tuned to RideApart for our follow-up interview after the race!

Pete Hitzeman is a writer, rider and athlete from Dayton, Ohio. When he's not covering racing and industry news for RideApart, you'll find him racing his bicycles, slamming bars at the gym, and cheering on his beloved Buckeyes. Follow him on Facebook, Twitter and Instagram.