How to Walk Away From a 180 mph Get-off: Inside the Loris Baz MotoGP Sepang Crash 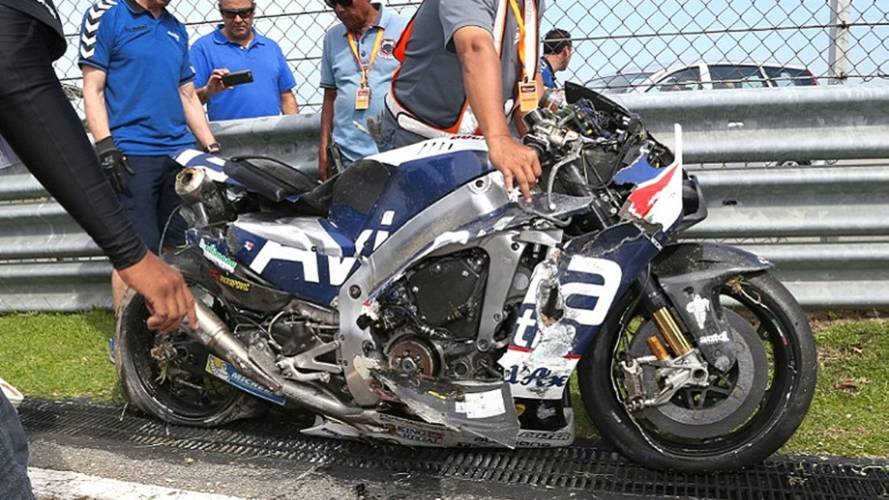 Loris Baz's accident was horrific, but, thanks to top tier gear, he was saved from any major injury.

The opening round of 2016 MotoGP testing this week in Malaysia proved to be rather exciting for Loris Baz of the Avintia Racing team. Loris' rear tire exploded down the straight at nearly 180 MPH, sending the bike out of control. Loris was ejected from the bike and slid down the Tarmac at break neck speeds. However, when the dust settled, Loris was able to get right up with nothing more than a sore elbow. The rattled rider jumped on the team's back-up bike and continued testing that day.

It's events like this that prove the worth of top/notch riding gear. Loris was wearing Alpinestars' Tech-Air Race airbag suit, equipped with a data-logging system. According to the results, Loris was pitched off the bike 1.9 seconds after losing control. This ejection triggered the air bag system to deploy just 60 milliseconds before Loris made first impact with the ground. This impact recorded a force of 29.9 G's to his left shoulder before he slid for 6.6 long seconds across the track and finally coming to a rest.

Though the airbag system in Loris' set of Alpinestars leathers definitely mitigated broken bones and internal injuries, it was the robustness of the materials, engineering and construction of the suit that saved him from further damage. These aspects come standard in all Alpinestars safety gear and this event is a testament to the quality of each.

Recently, we were able to test the material strength, construction quality and life of a 10 year-old Alpinestars race suit. Our test was conducted at less than half the speed of Loris' test, but we did not have the top-tier protection of Alpinestars' airbag system. Instead, we had a set of discontinued Race Replica leathers (since replaced by the GP-Tech model) manufactured in 2006, that had been put to extensive use ever since. This was an excellent test of the type of products available to the mass market and very relatable to the majority of riders who utilize aged racing leathers.

Our crash test was a left-handed low side at roughly 80 MPH. I was slammed to the deck without much warning or impact at all. I slid on my left side, head first into the dirt where the bike began flipping end over end, as did I. Holding a crouched position without letting your extremities flail is good practice to minimize injuries in these situations, so I focused on this technique. After finally coming to a stop (which was probably no more than 3-4 seconds), I was able to jump up and run off the track. It's tough to imagine Loris' situation, which began at over twice the speed and lasted for roughly twice as long...

Riders are put in these situations more often than they'd like and it's important to be prepared when the time comes. The gear the rider wears to protect his or her well-being is far more important than the bike it accompanies. However, all too often is more focus and investment directed towards the bike, with the small remainder spent on safety gear. Utilizing top-tier riding gear from brands with proven results such as Alpinestars is an excellent way to allow the fun of motorcycling to continue.