Erik Buell Racing - The Past, Present and Future 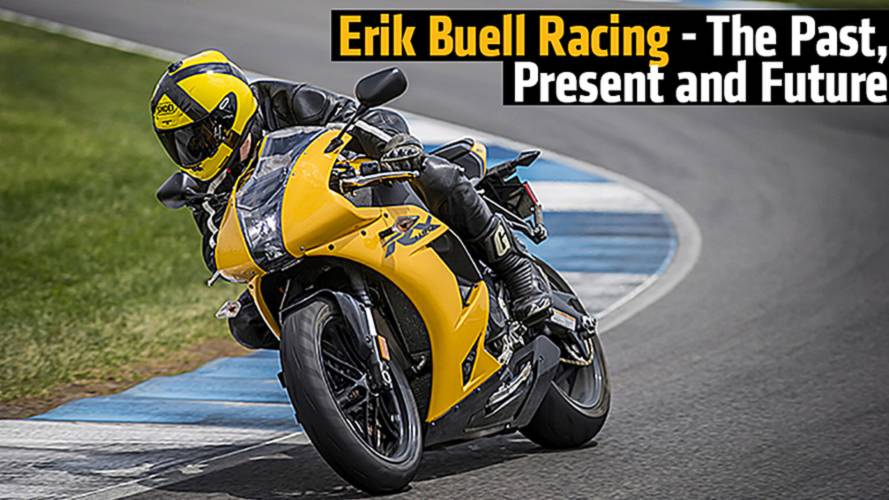 We try out the 2015 Erik Buell Racing 1190RX and examine the past, present and future of a designer, racer and builder who will not be defeated.

As Eirk Buell Racing (EBR) Motorcycles launches its 2015 lineup of motorcycles, we figured it was time to pay a little bit of attention to the startup and its founder, Erik Buell.

Erik Buell’s story is pretty well known. He was born in Pittsburgh, Pennsylvania in 1950 and grew up on a nearby farm. Buell caught the motorcycling bug early, building a Panhead out of a basketcase Harley-Davidson and riding on the local rural roads. He did some motocross racing, and then started road racing when he was in his 20s.

Buell was a competitive privateer on a Yamaha TZ and a Ducati Superbike in AMA races. At the same time, he was completing an engineering degree at the University of Pittsburgh by night while working as a motorcycle mechanic by day. When he graduated in 1979, he set his sights on a job at Harley-Davidson in Milwaukee – and got hired as a chassis design engineer and test rider, putting his racing career on hold.

But his racing and engineering drive could not be suppressed, and he left Harley-Davidson to build his first race bike for sale, the Buell RW750. The bike was a 750cc square four two-stroke, designed to run in AMA Formula One.

When AMA discontinued that class of race, Buell obtained a few surplus XR1000 engines from Harley-Davidson and created the Buell RR1000 – at the time, the only serious American sportbike. The bikes were sold in limited quantity through Harley-Davidson dealerships.

The Buell We Know

In 1988, Buell put the new H-D Evolution Sportster engine into a rubber-mounted racing chassis and created the RR1200 and RS1200. The relationship with Harley-Davidson grew closer and closer, and the Motor Company invested heavily in Buell. Erik Buell was inducted into the AMA Motorcycle Hall of Fame in 2002, and the future looked bright.

By 2003, Harley-Davidson owned 100 percent of Buell, and the company was producing a small yet broad lineup of bikes, from the beginners’ single Blast to the naked hooligan Lightning and adventure tourer Ulysses.

The economic crash of 2008 hit motorcycle manufacturers hard, and Harley-Davidson was not spared the pain. The company opted to circle the wagons and to concentrate on its core business – building Harley-Davidsons. They decided to divest themselves of the MV Agusta Group, and to shut down Buell Motorcycles on October 15, 2009. Industry observers puzzled over H-D’s refusal to sell Buell, and some speculated that there was a rift between the Motor Company and its former engineer.

Buell did not go gently into that good night, instead founding EBR Motorcycles (Erik Buell Racing), and immediately plunging into the development of an all-new race bike, the EBR 1190RS. 35 bikes were produced for 2013, working toward an announced total run of 100 bikes. The 175-hp liquid-cooled 1190cc V-twin sportbike carries a retail price of $46,495.

2014 brings the real retail launch of EBR. First up was the 1190RX with a suggested retail price of $18,995. Available in just one color, Strike Yellow, the 1190RX is a sharp-edged sportbike with aggressive ergonomics. It bears many of the hallmarks of Buell’s design philosophy, including light weight composite body panels, a single perimeter rotor front brake with an 8-piston inside-out caliper, Showa inverted front forks and a single rear Showa shock, 17” aluminum wheels front and rear (3.5” wide front/6.0” wide rear) and a design that appears to centralize and lower mass. A multi-function dash gives access to information about speed, RPM, odometer and the usual info, and also to control traction control modes.

We had the chance to examine, photograph and sit on (but not ride) an EBR 1190RX, and the bike lives up to expectations. The details are telling – this bike is beautifully built, especially for those of us who believe that form should follow function. There’s no ornament on the 1190RX – it is pure motorcycle, and has the feel of a hand-built machine.

The bike we are the most excited to ride, though, is the third bike in the EBR lineup, the 1190SX, which will be priced at $16,995. The 1190SX will share an engine and chassis with the 1190RX,  but is more naked bike than sportbike in execution. The seating position will be more upright, with mid-mount controls and taller handlebars. Seat height is almost three inches higher at 32.5”, and the engine is more exposed to view behind minimal bodywork. Four color schemes will be available: Frostbite White, Racing Red, Galactic Black and Laguna Blue. The less aggressive seating position should appeal to riders for whom the full sportbike crouch isn’t practical or desirable (like me).

Will Erik Buell’s second namesake company succeed as a business? Only time will tell. Has it succeeded as a concept already, and as a monument to one man’s passion for riding on two wheels? Absolutely.