Crescent Concept – Customization for a Cause 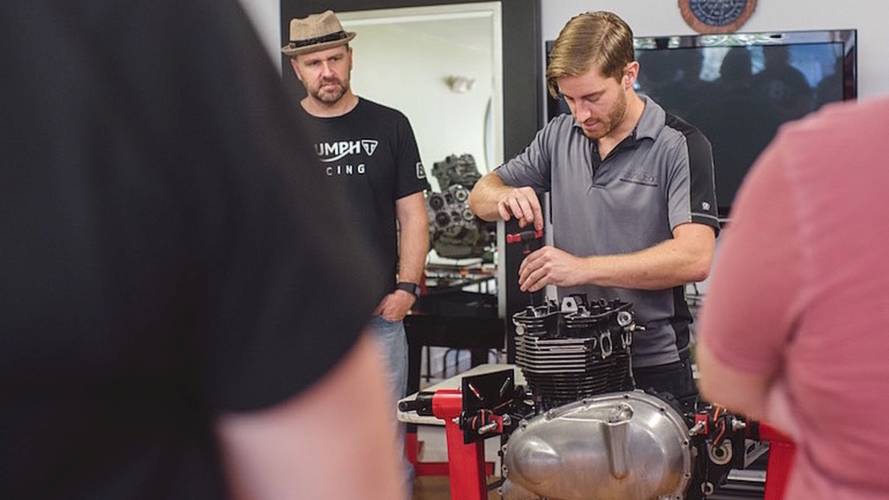 Crescent Concept – Customization for a CauseWhen you become a motorcyclist, you’re automatically destined to gain new friendships. You may even...

When you become a motorcyclist, you’re automatically destined to gain new friendships. You may even inherit non-blood related family members—that just comes with the territory. It’s a good perk to have when you decide to ride.

The camaraderie certainly gets much more stronger when you can get together with fellow riders and work on bikes together. So what could possibly strengthen this two-wheeled bond? This is possibly subjective, but how about having the opportunity to build a bike from the ground up, auction it off and donate the proceeds to charity. Ah yes, this can make the fact that you ride two-wheels even more rewarding than it already is.

Fortunately, co-owner of the New Orleans’ premiere Ducati and Triumph dealership, The Transportation Revolution (TTRNO), Maxwell Materne felt it was important to teach the moto community anything and everything when it comes to motorcycles.

Two years ago Materne created TTRNO Tech Talks, which cover different subjects such as roadside assistance, engine building, and service certification classes where students worked on their own bikes using TTRNO's shop tools. The classes are free and meet once a month.

“The events all went so well that the community asked for more, and since one of our main company objectives is to teach the public, we obliged,” said Materne.

They obliged by upping the ante and creating the Crescent Concept* project, which would teach the community how to build a motorcycle from scratch. The project was also inspired by the growing population of renowned motorcycle designers/fabricators. It started with JT Nesbitt of Bienville Studios, and rapidly progressed to include talent such as John Franco from Wicked Brothers Customs, and Patrick Tilbury and James Parker, who make up Royal T Racing.

*(Quick backstory about why it was probably named Crescent Concept: New Orleans is nicknamed the "Crescent City" because the Vieux Carré (aka, the French Quarter) was built at a sharp horseshoe bend in the Mississippi River.)

Materne approached these local motorcycle customizers and asked them if they would host a few of the Tech Talks. They immediately jumped on board.

“As we determined what each person would teach—exhaust fabrication, wiring class, suspension tuning, etc.—we had an "aha" moment...with the help of two or three bottles of Sake...that we should just put them in order to create a bike The Crescent Concept. From there, we set the schedule and here we are,” Materne explained.

The bike will be auctioned off at the end of the project with the each contributor's name listed on the build sheet.

Starting February 20th, TTRNO will host a series of classes devoted to the project.

“Historically my classes were capped at 15 people and have been packed. For the Crescent Concept, the first two classes design by JT Nesbitt have no limit to them and are also free. The other classes are limited to 30 spots per class and are currently $20 a class to cover material costs, but we are looking for sponsorship to cover it all and make the classes free.”

Triumph has already helped out by donating an engine for the project, which Materne said is a huge weight off their shoulders. However, they are still looking to find partners for machine time, metal, wire, paint, and more.

The custom bike build is slated to be completed by the end of September. As for the charities TTRNO is planning on donating the proceeds to, they've selected the Wounded Warrior project and High Art, which is aimed at creating mural parks in abandoned lots in New Orleans, as well as teach art to children.

Get Down South Now!

There have been mentions in the piece about the moto community, and you may be thinking that this is only for those in New Orleans. Of course, one would assume that the majority will be from there, but Crescent City is a tourist hot spot, so head on down to participate! If you do, be prepared to eat some of the best food around, meet some kick-ass folks, and work on an amazing project that's for a good cause.

The following individuals have signed on to participate on the Crescent Concept project: