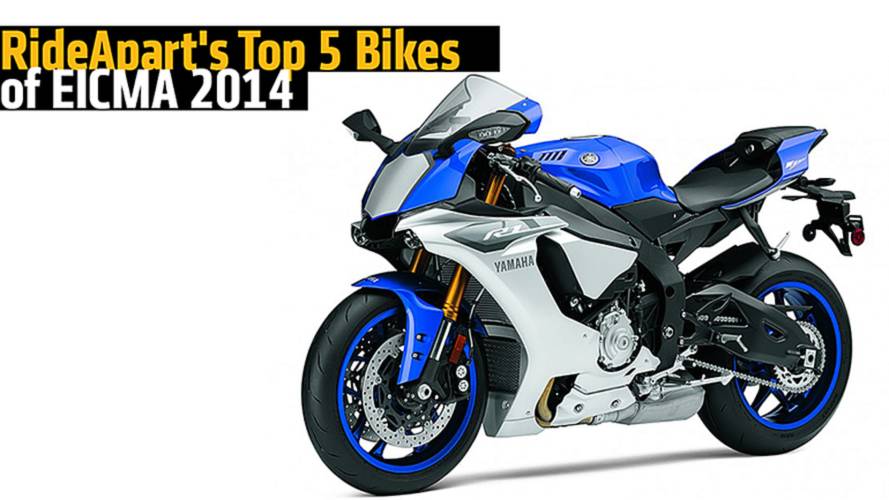 Some great bikes were rolled out in Milan this year. Here's our list of Top 5 bikes of EICMA 2014.

There were a lot of impressive bikes unveiled at this year's EICMA - and a few that were underwhelming. We asked the staff to assemble our favorite bikes of EICMA 2014. Here's our list.

While we're not sure how the new Multistrada will perform on the trail, we're pretty sure it'll be ridiculous on pavement. A sophisticated electronics package (including an Inertial Measurement Unit to maximize the bike's ABS) coupled with the 160hp engine might make this the ADV to beat in 2015.

Let's get the complaints out of the way: it's only got a range of 95 miles, and it's not exactly cheap. But the Eva still represents forward progress for electric bikes - charge time is reported to be 30 minutes, which isn't bad at all, especially for urban riders who may use the Eva as their commute vehicle. Energica's Ego sportbike has gotten high marks for its performance; the Eva will be powered by the same 136hp engine as the Ego.

A road bike for the track? Or a track bike for the road? Yamaha prefers you think of the R1 (and its race-focused, street legal sibling R1M) as the latter, thank you very much. We got a chance to see the R1 up close at a simultaneous release event here in California, and came away impressed. The engine is expected to produce as much as 200hp at crank, and features a slew of electronics to aid riders, including adaptive slide control, a first for any production motorcycle according to Yamaha.

It shouldn't surprise anyone that Yamaha is attempting to capture lightning in a bottle twice with this touring version of their immensely popular FZ-09. The FJ-09 will be an affordable sport/ADV tourer (again, we'll hold off on pronouncing the bike dirt-worthy until we've tried it offroad), offering amenities such as standard ABS and traction control as well as optional hard bags (which will add at least $550 to the overall price). There were flashier bikes at EICMA, but we felt that the FJ-09 has the potential to be the biggest selling bike to come out of EICMA.

Our affections for the Ducati Scrambler are well-known, and won't change, but...wow, do we want this bike to go into production. Husky's Svartpilen concept is a work of art and function. Powered by a water-cooled 400cc single, the Husky could do well on city streets as a commuter and in gravel as a weekend toy. Husky hasn't produced a street bike in years; they'll be putting the dual-sport 701 Supermoto into production in 2015. We've got our fingers crossed that the Svartpilen is close behind.