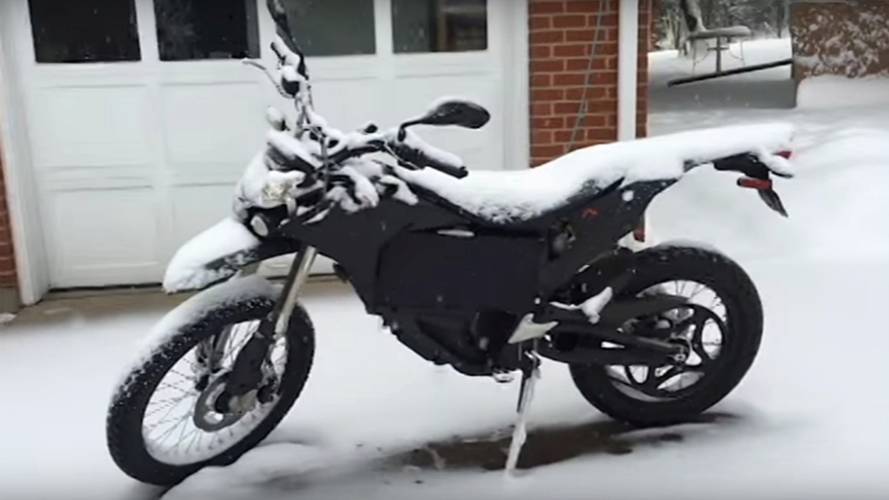 We ran a story last month about Aerostich's wild plan to test the Zero FX in freezing Duluth, Minnesota. With their permission, we will be sharing the blogged thoughts of their select group of testers. Stay warm and enjoy!

I was happy to get the keys back for another ride on the Zero tonight after nearly a week hiatus from being in the saddle. Having stayed a little later to get some work done this was my first time riding after sunset. The Zero headlights throw an adequate beam to see the road ahead of me, but like many bikes (my Kawasaki Versys included), stock lighting could always be enhanced or improved to be brighter. But, overall my route home is pretty well lit with streetlights and the lights of surrounding traffic, so nighttime visibility is not an issue. Outdoor temp was 7ºF for the ride home on mostly dry roads, making the heat from the grips and my WarmBib appreciated. The road into my neighborhood was mostly snow covered and there were a few instances where either the front or rear started to lose traction and slide out a bit, but balance was quickly re-gained. Parked the Zero outside the garage door and plugged in the extension cord to charge it up for the night.

The next morning was the start of another cold spell here, with the outdoor thermometer at my house reading -13ºF as I was gearing up in my heated gear, Roadcrafter, balaclava and insulated ski gloves. The temperature gauge on the Zero read -3ºF, but we’ve noticed that it tends to read a little higher than the ambient temp because of ‘heat pollution’ from the custom battery warming blanket installed on the bike. This is the coldest temperature I have ridden in, so I was glad to be bundled up as I twisted the throttle. Noticed immediately that helmet visor fogging was going to be an issue. Opening the visor a crack to let some air flow helped clear up the fogging from my breath condensing inside my helmet, but also resulted in wind hitting my exposed nose and cheeks with what felt like razor-like slashes, even at low speed.

I decided to stick to the side streets today, to minimize the wind-chill factor. Dealing with the visor fogging consisted of switching back and forth between a slightly cracked open shield with stinging-cold air, and closed for a warmer reprieve, but rapidly dissipating clarity of sight. I might have been able to do this dance for the entire commute down the hill to work, except after about 3 miles my fingers were cold to the point of being painful. The insulation of my ski gloves and the heat from the electric grips was not enough to combat the cold air leaking thru the seams. Ok, time for plan ‘B’.

Since this route happened to bring me right past my in-laws' house, I figured this was a good opportunity to have a quick visit and show them the Zero. Not to mention, I knew my mother-in-law would have the coffee on and I could warm my frozen fingers! After a hot cup of joe and a few cookies my fingers had warmed up and I was ready to finish the commute to work. Gearing back up I remembered that I had my Triple Digit Glove Covers in the right thigh pocket of my Roadcrafer, so I slipped them on over the top of my ski gloves.

The remaining 3-mile ride to Aerostich was uneventfully quiet. One thing I did notice after traversing a few rough, pot-hole laden sections of street (a not uncommon occurrence in Duluth), was how stiff the suspension was at this temp. Riding last week it seemed a little stiff, but this morning was like sitting astride a rock when hitting the bumps. I wonder if a different type of oil in the forks would make a difference? Another noticeable difference was how much warmer my finger were with the added layer of wind-proof protection from the Triple Digits. I guess they were just the trick to keep the sub-zero wind from getting through the seams on the gloves, allowing me to arrive at work with chilled fingers, but with enough feeling and dexterity to plug in the charger, take a photo with my phone to document mileage and temperatures and remove the keys from the ignition. Time to go in and share ride stories with my co-workers and write a blog post.