One Motorcycle: The Best Bike Show You Missed - Interviews & Gallery 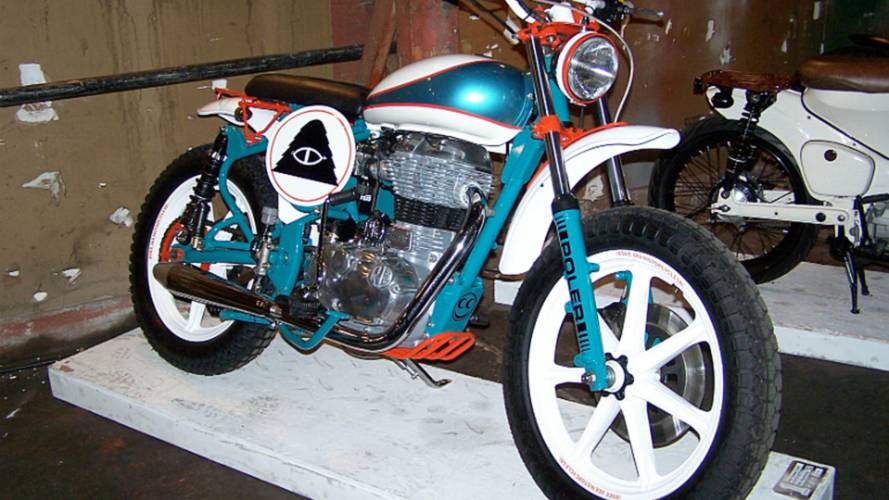 Portland's the One Motorcycle Show brings out some truly spectacular vintage builds and wild rides!

Unless you live in the Portland, Oregon/Vancouver, Washington area, or you’ ve got the inside track on some of the country’s best bike builders, you probably missed the best bike show in the U.S. again. For the seventh year, The One Motorcycle Show was held February 12-14th, in a historic manufacturing building in Portland’s lower eastside industrial area. 20,000+ square feet is a lot of space for 100 custom, classic, and racing motorcycles, a bandstand, ‘flea market’ of sponsors, and motorcycle and lifestyle artwork, but it also allows for a sizable crowd to avoid bumping elbows or incurring the wrath of the local fire marshall.

No easy task, we caught up with Thor Drake, The One Show founder and proprietor of Portland’s See See Motor Coffee and See See Motorcycles:

RideApart (RA): How did The One Motorcycle Show start?

Thor Drake (TD): It began as a gathering of motorcycles of all eras and makes, not just a certain type of bike or one marque. I started the coffee house, bike shop and the show all about the same time. The idea for a bike show occurred while I was in school and bored with the ideas other students in the class presented.

RA: How did the idea for this format happen?

TD: It was created to celebrate wild, rare, custom, classic and racing bikes from all eras. I had this feeling that there was an audience of riders that was underserved, and didn’t have a place to show or see different types of bikes. With no knowledge of what it took to put on a show or what might happen if we did this more than once, it has exceeded even my wildest imagination.

RA: What’s the driving force behind The One Motorcycle Show?

TD: A love of motorcycling and a feeling that everyone involved is adding something to it.

RA: You send invitations to builders across the country, allow others to submit their builds, and you don’t charge for admission. How is this possible?

TD: We wanted it to be for everybody, so we made it free to attend and free to exhibit. We’ve been fortunate to have attracted sponsors who understand what we’re about, and have been willing to grow with us.

RA:How has it changed over the years?

TD: Since we started, The One Show has doubled in size each year and I’m grappling with its success. I am concerned that it might somehow grow too big to remain authentic, and the last thing I want to do is to have to move it somewhere like the Convention Center.

RA: What keeps patrons, who on opening night waited patiently in a queue that bordered the entire building, coming back or discovering The One Show?

TD: It’s the cross of different styles of bike building that keeps things interesting, and the Show has never been the same. We’ve never advertised; this all happens by word of mouth, and that’s what makes it special and unique.

We also had the opportunity to talk with Mark Buche, BMW’s Marketing Communications Manager, who referred us to Roland Stocker, the Project Engineer on BMW Motorrad’s new R nineT Scrambler:

RA:The R nineT Scramber isn’t just an R nineT with a few cosmetic changes. Take us through what makes it a true Scrambler.

Roland Stocker (RS): While the Scrambler relies on the BMW 1200cc boxer engine, the dual silencer exhaust makes it sound completely different. On this model, we used a steel tank in a metallic matte color to reduce the cost without sacrificing performance. It also allows you to use a tank bag with magnetic mounts.

RA: The Scrambler’s ride height appears different than that of the R nineT. Is that correct?

RS: Yes, the handlebars are placed higher with slightly longer spring travel for greater comfort, and you’ll notice the single seat to give it a more upright riding position. We’ve used conventional front forks in place of the inverted ones, and dual sport tires on 19” alloy wheels instead of a spokes. There’s an analog tachometer and other details that make this more of a Classic than an Enduro or a Dual Purpose bike.

RA: Is this a limited edition model, or will it be available at all BMW motorcycle dealers?

RS: No, this is a regular production model, and you can purchase it through any authorized BMW dealer. However, it won’ t be available until later in the year. BMW Motorrad USA had a number of other custom bikes on display as well.

For more info on the One Motorcycle Show, check out the 2015 edition in the video below, and don't forget to check out their website: http://the1moto.com/

The One Motorcycle Show 2015 ! from See See Motor Coffee Co. on Vimeo.

And, of course, continue to Page 2 below for RideApart's 2016 One Motorcycle Show Gallery.

One Motorcycle: the Best Bike Show You Missed - Interviews & Gallery

Anticipation of actually getting inside

Bikes outside the show looked good too