Can We Elect a Motorcyclist in 2016? - The Only Election Coverage You Need 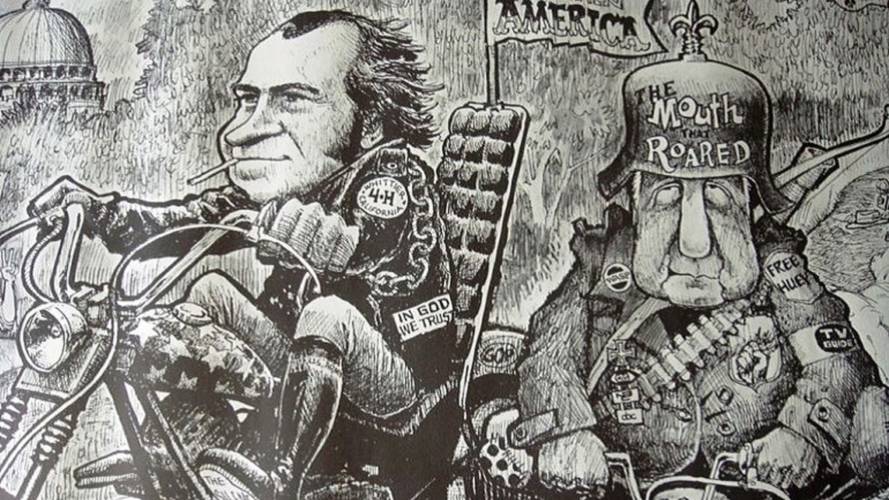 But, like, do any of the candidates in the 2016 election ride?

Now that the field has narrowed, and with Super Tuesday coming up, I think it's high time to look at how these candidates looked at through the motorcycle lens. Now I know this is dangerous ground, and the comment section is going to quickly devolve into assertions that Hillary's DOT is going to outlaw motorcycles entirely to protect us all from ourselves, or Bernie is going to close all the desert land to protect the alligator lizards, or Ben Carson is going to use motorcycle accident victims for his experimental brain surgeries...but I'm willing to chance it.

In sound politically-scientific form, I google image searched for the candidate's name and Motorcycle, Harley, etc. As far as I can tell, none of the current choices have ever owned or been an active rider. For that you have to cross your fingers that someone in the GOP picks John Huntsman as a running mate. That being said, there were several surprises.

In Iowa, Bernie Sanders did a campaign event in some guy's garage, surrounded by tools, bike and car parts.

Dr. Ben, meanwhile, held a town hall at the National Motorcycle Museum, also in Iowa, and seemed excited to be there. He may even be smiling!

John Kasich stopped at the museum of police motorcycles in New Hampshire during his campaign, but as you can see from this picture he has no idea what he is doing. However, it does look like he is making "Vroom-vroom" noises, and research indicates he is attracted to shiny mechanical things.

You would think Ted Cruz, being a Texan into guns and hunting and other manly outdoors stuff (at least according to his well public image), would have at picture riding a quad or side-by-side UTV, but I can't find one. Ted is no cruiser.

Marco Rubio lives in Florida, which is prime motorcycle country, and I was half-hoping to find a picture of the young candidate cruising on a scooter with a bikini clad Mrs. Rubio on the back, maybe from early in his career. Nope. He doesn't ride. Though he did attend the Joni Ernest motorcycle BBQ in Iowa, news reports say only Scott Walker and Rick Perry rode bikes at the event.

While I can find no pictures of Hillary on a bike (even young, striped pants, 1960s college student Hillary) Bill has been known to at least sit on a bike or two. He even knows what to do with his hands, unlike a certain GOP candidate above. Worth noting though is the fact that at the Clinton Library there was an exhibit entitled "Art of the Chopper"

Of course, if you hate watch Orange County Choppers as much as most riders, you'll know that Donald Drumpf is the worst kind of biker. The kind that owns a priceless, un-ride-able, theme bike that most likely sits in the corner of a "mancave" themed room in one of his many residences. However, I did turn up evidence that his son Donald Jr. is an avid off-road rider. So, you know, there's that.

The last president I can find actually riding a bike is Jimmy Carter (seen above campaigning around Georgia in the 1960s), though I seem to recall that Ronald Reagan had a Honda Trail 90 at his ranch.

Just to be clear, we don't necessarily recommend casting your ballot based on the evidence presented above...