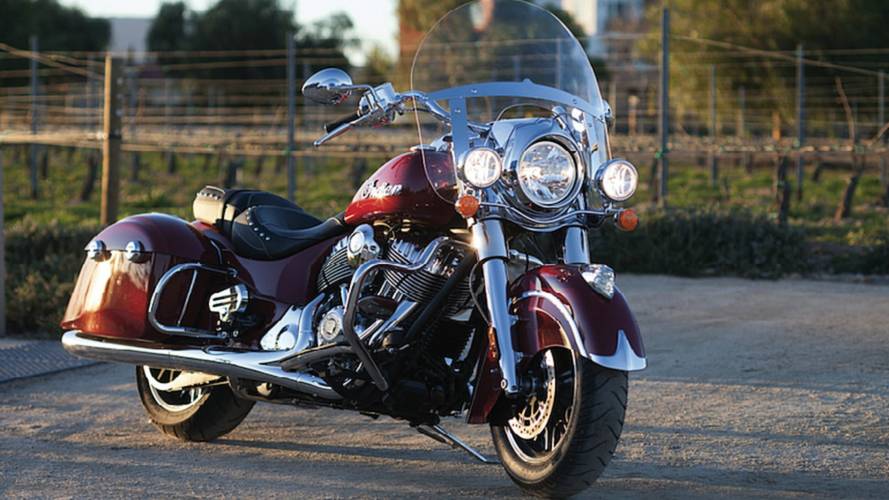 Indian Pulls Cover Off New Springfield ModelIndian Motorcycle unveiled its new Springfield model today, which, as RideApart predicted, is an...

Indian Motorcycle unveiled its new Springfield model today, which, as RideApart predicted, is an old-school tourer positioned to go head-to-head against the Harley-Davidson Road King.

Named after the town in Massachusetts where Indian was founded in 1901, the Springfield may look like the manufacturer's Chief Vintage model with more useful panniers and the fringe mercifully removed. But, in fact, it is more than just an accessories special.

Indian is pitching this as a true touring model, and as such has equipped it with a chassis similar to the Chieftain (and Roadmaster)— a motorcycle that is far more nimble than any machine its size has a right to be. The word "nimble" isn't often used to describe vehicles that weigh roughly 800 lbs., but you'd be surprised.

In place of that fairing, the Springfield gets a detachable windscreen. Indian says it can be removed without tools in about a minute. But, assuming it's the same system used on the Chief Vintage, I have removed one in 15 seconds.

The Springfield's passenger seat and lockable, waterproof luggage are also removable (I can't personally attest to how long it takes to do so), which means that it can easily transform into a better-steering version of the Chief Classic.

Indian, of course, offers a full line of accessories including a tall and low windshield, heated driver and passenger seats, soft lowers and heated grips. A 64-liter (17-gallon) trunk is also available if you are desperate to spoil the look of the bike.

To that end, the look is very old-school. In my opinion, the Springfield somehow manages to capture the 1940s aesthetic even more faithfully than other Indian models. It is very much a motorcycle for fans of the vintage style.

It is also a modern machine, however. ABS, cruise control and a tire pressure monitoring system are all standard. Tank-mounted gauges offer a tachometer, electronic speedometer with odometer, fuel gauge, dual trip meters, clock and so on.

Passenger floorboards are adjustable and the bike's keyless fob also opens and locks the panniers. This is the same system employed on the Chieftain and I can tell you from experience that the little boy in you will never get over how cool it is to push the button on the key fob and have the panniers pop open.

The Springfield is powered by the same planet-sized Thunder Stroke 111 V-Twin found in all of Indian's heavyweight bikes. Featuring a left side air intake, parallel pushrod tubes and down-firing exhausts, the 1811cc engine is estimated to deliver roughly 80 hp and 102 ft.-lbs. of torque (Indian claims 119 ft.lbs. of torque and does not give horsepower figures). Indian says riders can enjoy 5,000 miles between oil changes.

Price-wise, the new Springfield starts at $20,999 in the United States, slotting in between the Chief Vintage ($19,999) and Chieftain ($22,999). Available in "Thunder Black" or "Indian Motorcycle Red," the Springfield comes with a two-year unlimited mileage warranty and will be arriving at dealerships soon.