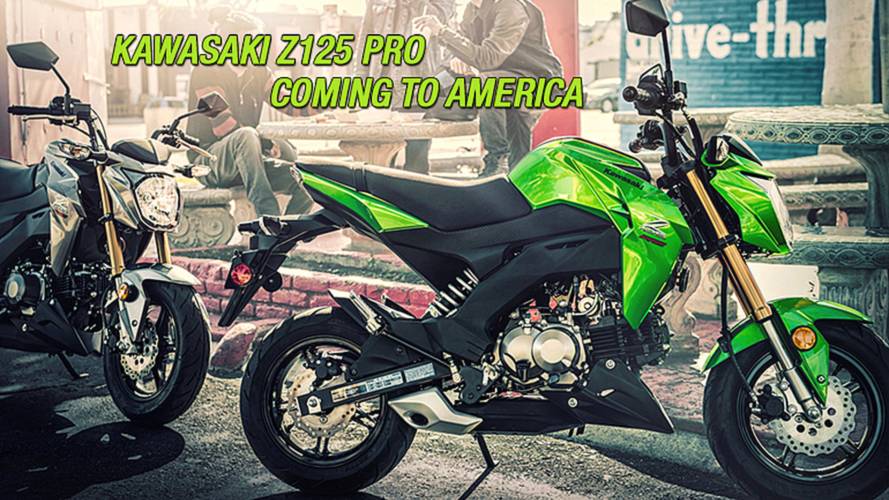 That's right. The Kawasaki Z125 Pro is bound for the US of A.

In a world where news of a new motorcycle is usually accompanied by adjectives like, bigger, faster and larger, it's refreshing to get some news about a smaller motorcycle coming the the shores of America.

Earlier this week, Kawasaki invited a select group of American Motorcycle Press to their headquarters in Irvine, California to announce that they are bringing the Z125 PRO to the United States.  The new (to America) 125cc sport bike will be the the newest addition the the Z family of Kawasaki naked sport bikes, taking design cues from its bigger brothers, the Z800 ABS and Z1000 ABS.

Don't let the diminutive size of Kawasaki's first new 2016 North American offering fool you into thinking this is small news.  Kawasaki is betting that Z125 Pro, will Let the good times roll, all over the Honda Grom.  During the announcement the folks at Kawasaki made no secret about who the "competitor" was, and came out swinging  with the announcement that the Z125 PRO will be priced at $2999.00 MSRP, undercutting the Honda GROM's MSRP by $200.00.

If you've ever been in the market for a GROM, you'll know that they don't languish on dealership showroom floors for very long, and that used ones sell for near retail prices.  The GROM's success and the cult following it's gained suggests that there is plenty of room in America for another pocket-sized sportbike. A demand which Kawasaki means to meet with the Z125 Pro.

Available in June 2016, the fun-sized baby Z will be available in two colors, Kawasaki's signature Candy Lime Green and Metallic Graphite Gray.  The Z125 PRO will come with a four-speed transmission and manual clutch.  Rolling along on 12-inch cast aluminum wheels wrapped in a 100/90 front and 120/70 rear tire, the Z125 Pro will be suspended by 30mm inverted front forks with 100mm's of stroke and a 4-way preload adjustable rear shock,  which Kawasaki claims can comfortably accommodate a passenger.

READ MORE: 11 Reasons Why You Don’t Want A Literbike | RideApart

If the success of the GROM is any indicator, Z125 Pro's will be a hot ticket. Whether or not demand will prompt dealers to raise prices above the $2999 MSRP, remains to be seen.

We're looking forward to the North American Launch of the Z125 Pro later in April 2016 and will bring you our first ride review.

Recently we posted a story about the new look of the 2016 GROM and shared a corny and fun promotional video Honda had released in Asia.  Not to be outdone, Kawasaki also has a feature-film style promotional video for the Z125 Pro.  In it a young hero has rescue his girlfriend from being blown up by a ticking time bomb in the Bayside District of Tokyo. His vehicle of choice is of course, the Kawasaki Z125 Pro.