Riding On the Wrong Side: Gravity Always Wins 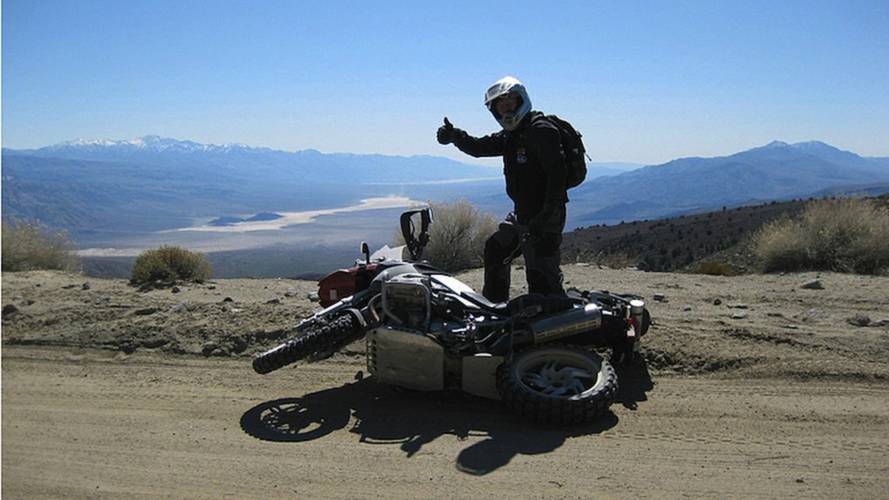 Dropping your bike is a part of riding your bike. But does gravity have to have the last laugh?

The other day, I read an interesting article by a motorcyclist going only by the name of Lobo, who wrote: "Motorcycles should pass the 'kick test.' You give them a kick and make them hit the ground. If you have no remorse and the bike is not broken, this is a good bike to travel to Morocco on."

I find that endearing, and it occurs to me that the kick test is a valid measure of a bike's worthiness even if you have no plans on riding to Morocco. Particularly if you're a new rider trying to decide upon your first bike.

Unfortunately— perhaps cruelly —I feel that's a mindset most people won't develop until after they've built up a few years of experience. I include myself among "most people." It was only recently I finally crossed the threshold.

The first time I dropped a bike was also the first time I took my wife out on a ride. At that point I had held my UK license for less than a month and was still getting used to the unusually top-heavy nature of the Honda CBF600SA I rode.

You will not have heard of the CBF600SA. Effectively, it was a Hornet with its personality removed. I had chosen it because of familiarity, having used the same model in training for my license.

This is the sexiest my Honda CBF600SA ever looked.

On one particular day of training, the instructor had taken myself and another rider to a parking lot to practice U turns, cones, and emergency stops. Every other time my fellow student attempted a U-turn she dropped the bike on top of herself, needing the instructor and me to help get her free.

In one of these instances, as I was helping her to her feet, I allowed my internal dialogue to become my external dialogue and said aloud: "Man, maybe motorcycling isn't your thing."

It was at that exact point karma starting plotting my comeuppance.

So there I was, about a month later, trying to show my wife how sexy I am by awkwardly ferrying her to the beach on history's most boring motorcycle. It was a beautiful day, and I decided to stop at a pub with outdoor seating for roughly 100 people.

You can see where this is going, can't you? The pub's beer garden was full. The only place I could find to park was right in front, on a potholed spit of gravel and uneven ground. I stumbled into the space, cut the engine, and, as my wife stepped off the bike, lost my footing.

I fought valiantly, but ultimately the 490-lb. bike came to a rest on its side with an unpleasant crunching sound. A sound immediately usurped by an ironic cheer from the drunken rugby team sitting 10 feet away.

Shortly after I took this photo I dropped the bike for the second time, snapping the lever for the front brake.

My soul burned. I felt I was going blind from embarrassment. But the universe wasn't done with me. Out of nowhere, the world's loudest Australian appeared, dressed head to toe in Harley-Davidson gear.

"LOOKS LIKE YOU DROPPED YER BIKE, MATE," he chortled. "YOU KNOW WHAT THEY SAY ABOUT A FELLA WHO DROPS HIS BIKE: HE'S A TW*T! HAHAHA!"

After muscling the bike up, I went to sit in a corner, refusing to even look up for half an hour. I would end up dropping that Honda again a few months later, in the rain, with no one looking, but the sting of embarrassment was no less acute.

There were a few incident-free years, then I got my Suzuki V-Strom 1000 and dropped it within a month of ownership—sort of. A brick wall "caught" the bike for me, but put a deep scratch on its much-ridiculed beak. My initial response was one that has since become standard: shouting every combination of obscene words I know.

But within the hour, I was feeling silly for having been so upset. A motorcycle is a thing, after all— a jumble of metal and plastic and rubber. It is a thing you're supposed to use. And it is the nature of things that get used that they will endure scrapes and bumps in the process.

My 'Strom in Italian traffic.

My wife unwittingly helped me come to this realization by attempting to sympathize.

"It's OK to be upset," she said. "That bike is your baby, your precious thing."

Well, yeah, it is. But that's not something I want said out loud. So I sucked it up and remembered the sage advice of 90s alterno-hippie band Poi Dog Pondering: "You should wear with pride the scars on your skin / To remember the adventures and the places you've been."

In my guise as a moto-journalist though, I've learned that accepting the reality of dropped bikes is so much easier when the bike you're dropping is someone else's. For example, when I dumped the Honda Africa Twin in some mud recently, I offered my usual screed of foul language to the heavens, but ceased caring almost immediately afterward. It's a bike. Bikes will drop. C'est la vie de la moto.

But all of this does raise one question for me: Since tumbling to the ground is such an incredibly likely event for a motorcycle, why aren't more of them equipped to do so?

We're expected to purchase all kinds of aftermarket bits and bobs— engine bars, frame sliders, etc. —but why don't these things come standard? Why aren't more bikes equipped with features like the tip-over protection on a Victory Vision (that feature really does work, by the way)? I accidentally tested it at a gas station in Switzerland a few months ago and as a result, my opinion of Victory shot up.

I realize not every bike can have awkward wings or engine bars, but it's interesting to me that more of them don't. Especially amongst classes of bikes targeted at new and returning riders. Those things should be far more durable.

Or maybe this doesn't really happen much to anyone else. Maybe that loud Australian guy was right about me. What's your experience?