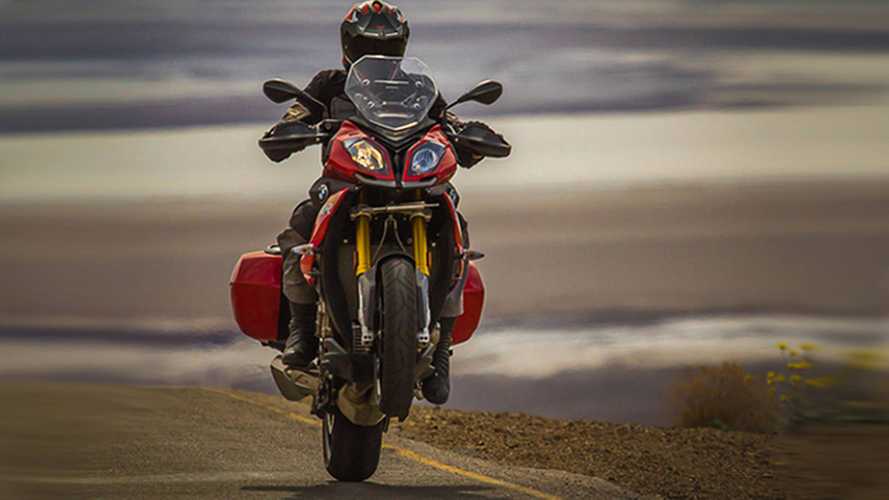 A crossbreed of a class-leading superbike with a renowned full ADV, the 2016 BMW S 1000 XR brings the best of both worlds together for a high performance, high tech, and high adrenaline adventure riding experience.

Jumping on the XR immediately feels very similar to the cockpit of the R 1200 GS that has been dominating the ADV market for years. The bars, controls, optional hand guards, dash and adjustable windscreen are extremely reminiscent to GS units. Then, the engine fires up and you are instantly reminded that an S 1000 RR-derived motor is powering this “tourer.”

Like the S1000RR, the XR requires a bit of extra revs and clutch slippage to get moving, but once it does, the RR motor doesn’t let you forget where it came from. Right at about 4,000 RPM’s the power curve ramps up steeply and so does the tendency of the front end. As the revs pass through the 10,000 territory, a light kick to the shifter pops the tranny into the next gear instantly with help from the butter-smooth quick shifter system. The front end floats gently across the pavement and never seems to get out of hand thanks to the stout steering stabilizer.

Throwing the bike into and out of corners is very precise with the leverage of the wide handlebars. However, the long travel of the suspension causes some loafing and numb feedback feel. Once the suspension is loaded up however, the bike is very stable in the corners and holds its line on exit.

Jumping onto the brakes coming up on a corner and hammering the transmission down through the gears is an awesome experience. The auto-blipping throttle, precise gear transition and seamless ABS operation allow focus to remain on the road ahead and entry angle of the bike. Again, the suspension could use some more damping to soak up the travel, but once loaded, the bike behaves vary predictably.

The “sport” aspect of this sport ADV bike the most prominent characteristic of the S1000XR, which can be attributed to the legendary superbike motor underneath the bodywork.

Originally designed for the track-shredding 200 HP S1000RR superbike, the XR’s power plant has racing roots. The 999cc inline four cylinder motor is retuned for more street and adventure appropriate riding conditions. The meat of the powerband is shifted down much lower on the RPM curve and capable of 83 ft. lbs of torque with a peak power of 160 HP at 11,000 RPM, as opposed to the 13,500 redline of its gnarly RR brother.

The motor is paired to a stout, tight though sometimes-clunky 6-speed transmission. It's obvious that a good portion of the internal components are derived from a gearbox originally engineered for high RPM operation. A standard cable-operated clutch mitigates power delivery to the rear wheel. However, a not-so-standard clutchless shifting system enables incredibly smooth shifting, including down shifts aided by an auto rev matching feature.

A chain drive system is opted for with the XR model as opposed to the shaft drive common on other adventure and touring bikes such as BMW’s R1200GS. This adds to the maintenance schedule, but enables the high performance powertrain to spread its wings.

Cradling the burly power plant is a forged aluminum frame, which also passes a portion of the load through the motor itself. The chassis is very stout and doesn't transmit any sense of flexing at speed or wallowing through corners. Then again, the bike ready to ride with a full tank of just over 5 gallons of gas weighs in at just 502 lbs. That’s over 50 lbs heavier than the RR, but over 70 lbs lighter than the GS.

Suspending the wheels from the chassis is a set of electronically controlled and adjustable suspension packages. Up front are beefy 46mm inverted forks with a dual-sided swing arm in the rear more reminiscent to that of the RR rather than the single-sided GS unit. Both front and rear suspension units offer 5.9 inches of travel. Not quite the >8 inches the GS is capable of, but significantly more than the 4.7 inch range of the RR’s track package. Regardless, this set up towers the seat a good distance above the ground at over 33 inches (just 2 inches shorter than the GS). This 5’ 10” journalist could just barely flat-foot both feet when at a stop, but that didn't pose any sort of issue with this well-balanced bike.

Slowing things down in a quick but controlled fashion are Brembo brake components coupled with the BMW Motorrad ABS system pulled from the racing department. Four piston calipers bind on dual 320mm discs up front with a single disc in the rear. Speed is shed in a hurry with minor lever input and the ABS system maintains traction smoothly without much chatter from intervention transmitted through the chassis.

In true BMW fashion, the S1000XR’s tech package is loaded with plenty of features. The usual suspects are all present such as ABS, traction control and on-the-fly selectable power delivery maps. However, BMW goes a few steps further with the S1000XR suite. Electronically adjustable suspension, well-integrated quick shifting system and the fly-by-wire throttle are the highlights of this very capable tech package.

Power modes of “Rain,” “Road,” “Dynamic” or “Dynamic Pro” can be selected while riding through one simple button on the right hand controls. Fumbling through menus and punching multiple buttons to accomplish these adjustments would be very distracting so the simplicity of this operation is key. The three suspension preload settings and two suspension characteristic settings can also be set through a simple button on the left hand control.

The effects of these modes are definitely noticeable and not just a novelty item like some of the other systems out there. The different preload settings are especially useful when riding with a passenger and full luggage cases. The “Dynamic Pro” power setting undeniably unleashes all of the motor’s potential and isn’t against letting the front end air out. Clicking into the next gear is extremely smooth and requires very minimal foot pressure and stroke of the shifter. Down shifting is also a cheap thrill as a light tap on the shifter automatically blips the throttle, drops into the next gear and causes a throaty backfiring exhaust grumble all at the same time.

BMW also collaborated with Garmin to offer an integrated “Motorrad Navigator V” GPS system. The software, menu layout and design are all very similar to those on Garmin’s aftermarket units that have been widely available for years. The unit for the XR mounts on the dash, just above the standard instrument display and is easily removable when leaving the bike in less-than-savory parking lots.

The system is controlled via touch screen like typical aftermarket GPS units, but can also be manipulated through a scroll wheel mounted on the left handgrip. This makes zooming in and out of maps and toggling through menus very easy without taking your hands off of the bars.

The wide and rearward-swooping dirt style handlebars combined with the low, wide pegs and extremely comfortable seat make for a very relaxed riding position. However, the wide bars allow for plenty of leverage when performing aggressive maneuvers. The seat cups your rear end in excellent fashion and even provides lower back support on longer riders as well as keeping you firmly planted during wide-open stints. The numerous hand controls take some time to become oriented but all items are within easy thumb or index finger reach.

One drawback that became apparent rather quickly is the vibration transmitted through the bars. Even at low speeds around town but definitely on freeway trips, a buzzing through the grips is very annoying and causes hands to become numb on any sort of extended ride. This is strange for a bike design for lengthy road trips and swapping out the firm hand grips for a thicker design with softer material would be tough with the heated hand grip system. However, a thin rubber bushing or shim between the handlebar and mount to the triple tree could easy alleviate this issue.

The passenger seat was even tested and reported to be extremely comfortable. The rear hand grips are sturdy, pegs not too compact and seat is plush putting the passenger up high with great visibility. Mounting and dismounting can be a bit of a challenge with the luggage hard bags installed but act as comfortable leg rests when riding.

The 2016 BMW S 1000 XR is another addition to the growing sport touring/ADV category. We would expect nothing less than a model loaded to the brim with proven features, capability and performance from BMW and that is exactly what the XR delivers. The awesome S1000RR derived motor, very functional tech features and comfortable ride of the XR raise the bar for this popular category. Finally, the price tag under $16,000 puts the S1000XR at the top of our sport ADV list.

Once again, BMW calls on its experience, engineering and extensive resources to hedge any risk of not completely dominating another subcategory of the industry.